When I first started teaching biology -- thirty-four years ago, which kind of seems impossible to me -- I always prefaced any discussion of fossils and extinct animals by emphasizing what fossils don't tell us.

"All the kids' books about prehistoric animals," I told my classes, "illustrate what the living animals looked like by making inferences based on current species.  A hundred years ago, the paleontologists thought of the dinosaurs as being big lizards; in fact, the word dinosaur comes from the Greek words for 'terrible lizard.'  Since that time we've discovered their relationship to birds, and it seems like there were a number of species covered with feathers, not scales.  The truth is, we have extraordinarily limited information about what the dinosaurs looked like from the outside, and almost nothing in the way of knowledge about their behavior.  Fossils just don't give us that information."

Well, I was wrong.

Maybe not in general; your average triceratops thigh bone doesn't tell you anything about the color of the animal it came from.  But paleontologists are getting better and better at figuring out amazing detail about the appearance and behavior of prehistoric animals using nothing but the preserved bones, and some astonishingly sensitive equipment to study them with.

Take the recent study of a wonderfully well-preserved skull of Thecodontosaurus, which lived about 205 million years ago and was an earlier cousin of such behemoths as Brachiosaurus and Diplodocus.  Thecodontosaurus itself wasn't that big -- about 1.5 meters tip-to-tail -- and little was known about its appearance and behavior, even such broad-brush features as whether it was bipedal or quadrupedal.

We now have some much better data to work from, thanks to a paper that appeared in the Zoological Journal of the Linnean Society last week.  A team made up of Antonio Ballell, J. Logan King, Emily Rayfield, and Michael Benton (of the University of Bristol) and James Neenan (of Oxford Univeristy) did a phenomenally detailed study of the skull, which was itself found near Bristol.  Using a combination of CT scans and imaging software, they reconstructed what the animal's brain -- long since decayed away -- looked like.

And from that, to determine how it behaved while it was alive. 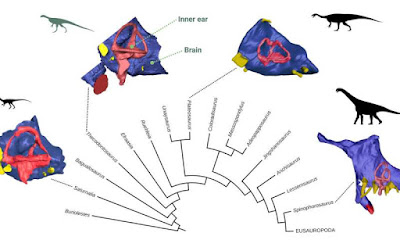 "Even though the actual brain is long gone, the software allows us to recreate brain and inner ear shape via the dimensions of the cavities left behind," study lead author Antonio Ballell said, in a press release in Phys.org.  "The braincase of Thecodontosaurus is beautifully preserved so we compared it to other dinosaurs, identifying common features and some that are specific to Thecodontosaurus.  Its brain cast even showed the detail of the floccular lobes, located at the back of the brain, which are important for balance.  Their large size indicate it was bipedal.  This structure is also associated with the control of balance and eye and neck movements, suggesting Thecodontosaurus was relatively agile and could keep a stable gaze while moving fast...  This could also mean Thecodontosaurus could occasionally catch prey, although its tooth morphology suggests plants were the main component of its diet.  It's possible it adopted omnivorous habits."

Amazingly, all this was done without removing the skull from the rock that encased it, a process that often damages fine structures even if the researchers are as careful as possible while extracting it.  The CT scanner was able to see not only inside the rock but inside the skull itself, distinguishing the fossil from the sedimentary rock outside and inside, and the imaging software helped to clarify minuscule details of the interior of the brain case -- and thus details of the brain it once enclosed.

Study co-author Michael Benton said, "It's great to see how new technologies are allowing us to find out even more about how this little dinosaur lived more than 200 million years ago."
Thinking about prehistory has been a positive fascination of mine since I was a kid, and I remember how disappointed I was to find out that all the stripy and spotted and colorful pictures in my dinosaur books were "artists' renditions" -- i.e., made up and very probably wrong.  We're still not there with color, yet, although a single feather from Eocoracias, a kingfisher-relative that lived 47 million years ago, was so well-preserved that scientists were able to make a shrewd guess that it was blue in color, like many of its modern relatives.
We still have a long way to go, and it's likely that the ravages of time have erased the vast majority of the information that could clue us in on prehistoric animal behavior and appearance.  The fact that we can ascertain anything is itself remarkable.  And I'd wager that if we ever do time-travel back to the distant past, we'd be in for some serious surprises at how different everyone looked than the way we'd always pictured them.