I am fundamentally an optimistic person.

I know that might be surprising, given that I frequently write here at Skeptophilia about the absolute mind-bending stupidity humans sometimes come up with.  Even so, I'm firmly of the opinion that most people are decent and kind, and just want what everyone wants -- stability, the basic necessities of life, friendship and family, acceptance, support.  Traveling as much as I have reinforced that; everywhere I've gone, even to places where the culture is entirely different from the one in which I was raised, I've found that friendliness is reciprocated and most people I meet are basically good at heart.

But if there's one thing that I can identify as a pervasive flaw in the human psyche, it's our determination to keep doing things the way we've always done even after it's been demonstrated beyond any doubt that it's not working, or is causing actual problems, sometimes worse ones than the ones we're solving.  Two obvious examples come to mind, and are probably the same ones you'd come up with.  Climate change -- after all, Swedish chemist Svante Arrhenius told the world about the greenhouse effect in the 1890s, and theorized that burning fossil fuels would boost the carbon dioxide content of the atmosphere and raise temperatures.  So it's not exactly a new idea.  Scientists have been recommending a severe cutback on fossil fuel use since the 1970s.

And yet here we are.

The other one is of more recent vintage, and is the recommendation by medical professionals to wear masks and avoid gatherings to curb the COVID-19 pandemic.  The sense of this should be obvious when you look at success stories like New Zealand, which effectively eradicated the disease entirely.  But no -- to score political points, even if it's at the expense of thousands of lives, idiots like Jim Jordan and Sean Hannity talk about how "the left" (for that, read "people who would like their friends and family to stay alive") wants to cancel Christmas, and that the suggestion we have virtual get-togethers this year is the equivalent of carpet-bombing Whoville.

The reason the topic of continuing to repeat our mistakes ad infinitum comes up is that I just re-read the novel A Canticle for Leibowitz by Walter Miller. 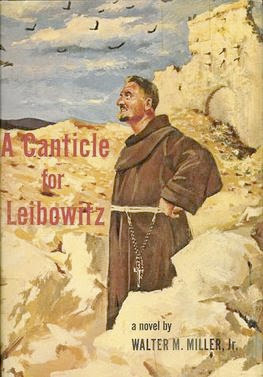 The first edition cover, from 1959

The book takes place after the "Flame Deluge" (the nuclear war that we came so close to back in the 1960s and 1970s) effectively destroyed civilization, sending us back into the Dark Ages.  It's divided into three sections: Fiat Homo ("Let there be man"), Fiat Lux ("Let there be light"), and Fiat Voluntuas Tua ("Let thy will be done").  There is about an eight-hundred-year gap between the sections, and each one has as its main character a monk of the Abbey of Saint Leibowitz in the deserts of New Mexico; first the meek, earnest Brother Francis Gerard, then the brilliant but conflicted Dom Paulo, and finally the staunch, deeply courageous Abbot Jethrah Zerchi.  And through the course of the book we watch civilization rebuild, to the point that they're on the verge of doing it all again, despite knowing what will happen, despite seeing all around them the effects of the first global nuclear war.

Near the end of the book is a passage, spoken by Abbot Zerchi, which would be in strong contention for the most poignant lines ever written:

Listen, are we helpless?  Are we doomed to do it again and again and again?  Have we no choice but to play the Phoenix in an endless cycle of rise and fall?  Assyria, Babylon, Egypt, Greece, Carthage, Rome, the Empires of Charlemagne and the Turk.  Ground to dust and plowed with salt.  Spain, France, Britain, America -- burned into the oblivion of the centuries.  And again and again and again.

Are we doomed to it, Lord, chained to the pendulum of our own mad clockwork, helpless to halt its swing?

I first read this brilliant, beautiful, and devastating novel when I was an undergraduate, and although I kept my copy of it, I never re-read it until I was casting about for something to read a couple of weeks ago and stumbled across it.  And it's still as spot-on as it was when it was written in 1959, back during the Cold War, when kids did nuclear bomb drills by hiding under their desks, and we all pretended that this was somehow preparing for the results of an all-out war.

The threat of nuclear war has fortunately faded, but that tendency to repeat our mistakes hasn't gone away.  We only listen to the scientists when what they say is convenient and won't disrupt our comfortable lives.  We don't even considering changing our course until things have gotten so bad that a course correction is unlikely to have any effect.

And we still tolerate elected officials who don't deserve the title of "leaders," who choose to play politics when the health, safety, and lives of tens or hundreds of thousands of people are at risk.

I wish I could find some positive way to end this post, but like the last Abbot of the Abbey of Saint Leibowitz, instead I'm afraid all I can do is stand there in dumb amazement at our determination not to learn from history.  Sure, some of us act; there are those few who are truly willing to walk their talk regardless of the risk, people like Dr. Sandra Steingraber whose fight against the disinformation campaign from the fossil fuels industry has landed her in jail.  People like author, journalist, and dedicated environmental advocate Bill McKibben.  People like the late Wangari Maathai, who virtually single-handedly improved the lot of Kenyan women through her tireless efforts to break the patriarchy's stranglehold on business.  People like Malala Yousafzai and Greta Thunberg and Cameron Kasky and Emma González and Jamie Margolin, who have refused to take no as an answer despite the difficulties and personal risks involved.

Activists like them are absolutely critical, and give me hope, but we need more of them.  A lot more.  My intuition is that we're at a crossroads; a point where we're faced with a choice between doing things as we've always done despite knowing, knowing with absolute assurance, that the old ways don't work, and changing what we do even if it's hard.

Let's all dedicate ourselves, today, to making the right choice.

*************************************
I've always had a fascination with how our brains work, part of which comes from the fact that we've only begun to understand it.  My dear friend and mentor, Dr. Rita Calvo, professor emeritus of human genetics at Cornell University, put it this way.  "If I were going into biology now, I'd study neuroscience.  We're at the point in neuroscience now that we were in genetics in 1900 -- we know it works, we can see some of how it works, but we know very little in detail and almost nothing about the underlying mechanisms involved.  The twentieth century was the century of the gene; the twenty-first will be the century of the brain."
We've made some progress in recent years toward comprehending the inner workings of the organ that allows us to comprehend anything at all.  And if, like me, you are captivated by the idea, you have to read this week's Skeptophilia book recommendation: neuroscientist Lisa Feldman Barrett's brilliant Seven and a Half Lessons About the Brain.
In laypersons' terms, Barrett explains what we currently know about how we think, feel, remember, learn, and experience the world.  It's a wonderful, surprising, and sometimes funny exploration of our own inner workings, and is sure to interest anyone who would like to know more about the mysterious, wonderful blob between our ears.
[Note: if you purchase this book using the image/link below, part of the proceeds goes to support Skeptophilia!]