During my junior year as an undergraduate, I had to take a humanities elective as part of my degree requirements and settled upon a class in archaeology, a subject which had always been an interest of mine.  The course description sounded pretty cool, and I thought it would be a fun challenge to take on.

However, I had not reckoned with the fact that the professor, one Dr. Servello, seemed to have a screw loose.  I found this out early on when one day he caught a glimpse of some genealogical charts in my binder (part of a family tree project I was doing as an anniversary gift for my parents), and added that to the fact that I wore a St. Christopher medal, and concluded from this that I was a member of a cult.

He kept me after class that day to ask me what my cult believed.  When I protested that in fact, I did not belong to a cult, he became genuinely concerned and said, "No, no, you don't need to be afraid to tell me!  I'm fascinated by alternative belief systems!"

But the most striking thing about Dr. Servello was that he never admitted to being wrong.  About anything.  He had a nearly Trumpian ability to continue arguing his point even after having hard evidence that he'd misspoken thrown into his face.  One time he argued for a half-hour over the correct pronunciation of a Chinese archaeological site -- with a student from China.  In very short order we learned not to bother contradicting him about any of the wacky things he said, because it never accomplished anything but wasting inordinate amounts of class time.

But as in any group, in the class there was That Guy.  He felt duty-bound to challenge Dr. Servello every time he made shit up, which was usually several times per class.  But the one that stands out in my memory was the epic argument that ensued when Dr. Servello was telling us about dire wolves.

"It's one of the largest predatory mammals ever," he said, with great conviction.  "They were fourteen feet tall at the shoulder."

Simultaneously all of the two-dozen-odd students in the class gave Dr. Servello the human equivalent of the Canine Head Tilt of Confusion.  Even so, most of us just added it to our growing list of bizarre Servello-isms, and were prepared to let it go.

But not That Guy.

"No, no, they were huge!" Dr. Servello insisted.  "Biggest predatory mammal ever!"

"That's impossible," That Guy said through clenched teeth.  "A wolf that big could look into a second-story window."

There followed a good forty-five minute-long argument, ending with That Guy grabbing his binder and storming out of class.

I related the story to some friends later.  These friends always waited with bated breath for me to come out of archaeology class, to see what lunatic pronouncements Dr. Servello had made that day.  This one, however, was impressive even by comparison to his previous efforts.

"That," one of my friends said reverently, "is one big bow-wow."

The topic comes up because while dire wolves are not fourteen feet high at the shoulder (which, for the record, would make them taller than a full-grown male African elephant) they are a fascinating species.  They were pretty impressive animals -- adults averaged a meter high at the shoulder and a little over two meters from tip to tail -- but their skeletal morphology led taxonomists to believe they were simply larger cousins of the North American gray wolf, descended from a parental species that had crossed the Bering Land Bridge into Eurasia.  But that idea is being challenged by some new analysis of DNA from dire wolves who were trapped in the La Brea Tar Seeps forty-some-odd thousand years ago, and a comparison with gray wolf DNA supports a conclusion that the last common ancestry of the two species was around 5.7 million years ago, before the ancestors of today's gray wolves had crossed into North America. 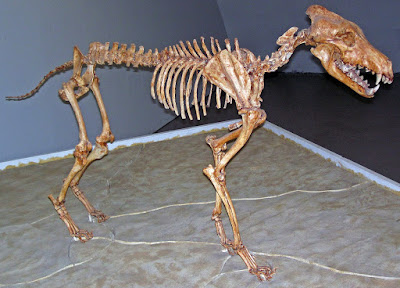 The research, which was the subject of a paper in Nature this week, suggests that the morphological similarities between gray wolves and dire wolves are due to convergent evolution -- the evolution of superficially similar traits in distantly-related species that are under the same selective pressures.  And of course, these two were starting out closer in structure anyhow; no one is doubting that dire wolves are canids.  But the DNA difference is striking enough that the researchers are proposing to take the dire wolf out of the genus Canis and place it in its own new genus -- Aenocyon, meaning "terrible wolf."

"These results totally shake up the idea that dire wolves were just bigger cousins of gray wolves," said paleontologist Grant Zazula, who was not involved in the new study, in an interview with Scientific American.  "The study of ancient DNA and proteins from fossil bones is rapidly rewriting the ice age and more recent history of North America’s mammals."
It is not, for the record, rewriting how big they were.  As terrible as Aenocyon was, it wouldn't have towered over an elephant.  However, it is thought to have had the greatest bite force of any canid ever, and as it seems to have been a pack hunter, could take down some of the megaherbivores of its time -- giant ground sloths, North American camels and horses, bison... and even mastodons.
But like most of the Ice Age megafauna, the changing climate at the end of the Pleistocene put the dire wolf in dire straits.  They're thought to have persisted in areas of the northern Rockies as little as 9,500 years ago, but when the big prey animals began to disappear, selection favored their smaller (now thought to be distant) cousins, gray wolves.
Which is kind of a shame.  They were impressive beasts, even if they weren't the big bow-wows Dr. Servello claimed they were.  And it's nice to clarify at least a little more of their genetics and history, turning a lens on a species we thought we understood.
******************************************
As a biologist, I've usually thought of myself as immune to being grossed out.  But I have to admit I was a little shocked to find out that the human microbiome -- the collection of bacteria and fungi that live in and on us -- outnumber actual human cells by a factor of ten.
You read that right: if you counted up all the cells in and on the surface of your body, for every one human cell with human DNA, there'd be ten cells of microorganisms, coming from over a thousand different species.
And that's in healthy humans.  This idea that "bacteria = bad" is profoundly wrong; not only do a lot of bacteria perform useful functions, producing products like yogurt, cheese, and the familiar flavor and aroma of chocolate, they directly contribute to good health.  Anyone who has been on an antibiotic long-term knows that wiping out the beneficial bacteria in your gut can lead to some pretty unpleasant side effects; most current treatments for bacterial infections kill the good guys along with the bad, leading to an imbalance in your microbiome that can persist for months afterward.
In The Human Superorganism: How the Microbiome is Revolutionizing the Pursuit of a Healthy Life, microbiologist Rodney Dietert shows how a lot of debilitating diseases, from asthma to allergies to irritable bowel syndrome to the inflammation that is at the root of heart disease, might be attributable to disturbances in the body's microbiome.  His contention is that restoring the normal microbiome should be the first line of treatment for these diseases, not the medications that often throw the microbiome further out of whack.
His book is fascinating and controversial, but his reasoning (and the experimental research he draws upon) is stellar.  If you're interested in health-related topics, you should read The Human Superorganism.  You'll never look at your own body the same way again.
[Note:  if you purchase this book using the image/link below, part of the proceeds goes to support Skeptophilia!]