In H. P. Lovecraft's wildly creepy story "The Shadow Out of Time," we meet a superintelligent alien race called the Yith who have a unique way of gathering information.

The Yith, who lived in what is now Australia's Great Sandy Desert some 250 million years ago, are capable of temporarily switching personalities with other intelligent beings throughout the cosmos and from any time period.  While the consciousness of the kidnapped individual is residing in its temporary Yith body, it enjoys the freedom to learn anything it wants from the extensive library of information the Yith have gleaned -- as long as the individual is willing to contribute his/her own knowledge to the library.  The main character, early twentieth century professor Nathaniel Peaslee, is switched, and while he is living with the Yith he meets a number of luminaries whose personalities have also been swiped, including:

Compared to most of the gory dismemberments other Lovecraftians entities were fond of, the Yith are remarkably genteel in their approach. Of course, it's not without its downside for the kidnapped individual; not only do they lose control over their own bodies for a period up to a couple of years, they experience serious disorientation (bordering on insanity in some cases) upon their return to their own bodies.

Nevertheless, it's a fantastic concept for a story, and I remember when I first read it (at about age sixteen) how taken I was with the idea of being able to meet and talk with individuals from both past and future, not to mention other species.  But what struck me most viscerally when I read it was when Peaslee, in the Yith's body, describes what he sees surrounding the library.

It's a tropical rain forest.  What now is a barren desert, with barely a scrap of vegetation, was a lush jungle:

The skies were almost always moist and cloudy, and sometimes I would witness tremendous rains.  Once in a while, though, there would be glimpses of the Sun -- which looked abnormally large -- and the Moon, whose markings held a touch of difference from the normal that I could never fathom.  When -- very rarely -- the night sky was clear to any extent, I beheld constellations which were nearly beyond recognition.  Known outlines were sometimes approximated, but seldom duplicated; and from the position of the few groups I could recognize, I felt I must be in the Earth's southern hemisphere, near the Tropic of Capricorn.

The far horizon was always steamy and indistinct, but I could see that great jungles of unknown tree ferns, Calamites, Lepidodendron, and Sigillaria lay outside the city, their fantastic fronds waving mockingly in the shifting vapors...  I saw constructions of black or iridescent stone in glades and clearings where perpetual twilight reigned, and traversed long causeways over swamps so dark I could tell but little of their towering, moist vegetation. 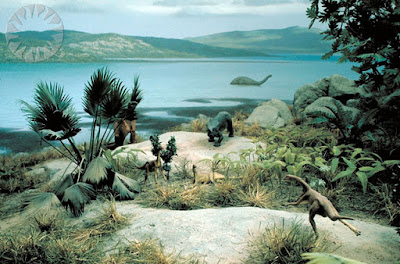 I think it's the first time I'd really gotten hit square between the eyes with how different the Earth is now than it had been, and that those changes haven't halted.  In the time of Lovecraft's Yith, 250 million years ago, where I am now (upstate New York) was underneath a shallow saltwater ocean.  Only a hundred thousand years ago, where my house stands was covered with a thick layer of ice, near the southern terminus of the enormous Laurentide Ice Sheet.  (In fact, the long, narrow lakes that give the Finger Lakes Region its name were carved out by that very glacier.)

I was immediately reminded of that moment of realization when I read a paper a couple of days ago in Nature called "Temperate Rainforests Near the South Pole During Peak Cretaceous Warmth," by a huge team led by Johann Klages of the Alfred-Wegener-Institut Helmholtz-Zentrum für Polar- und Meeresforschung, of Bremerhaven, Germany.  Klages's team made a spectacular find that demonstrates that a hundred million years ago, Antarctica wasn't the windswept polar desert it currently is, but something more like Lovecraft's vision of the site of the prehistoric library of Yith.  The authors write:

The mid-Cretaceous period was one of the warmest intervals of the past 140 million years, driven by atmospheric carbon dioxide levels of around 1,000 parts per million by volume.  In the near absence of proximal geological records from south of the Antarctic Circle, it is disputed whether polar ice could exist under such environmental conditions.  Here we use a sedimentary sequence recovered from the West Antarctic shelf—the southernmost Cretaceous record reported so far—and show that a temperate lowland rainforest environment existed at a palaeolatitude of about 82° S during the Turonian–Santonian age (92 to 83 million years ago).   This record contains an intact 3-metre-long network of in situ fossil roots embedded in a mudstone matrix containing diverse pollen and spores.  A climate model simulation shows that the reconstructed temperate climate at this high latitude requires a combination of both atmospheric carbon dioxide concentrations of 1,120–1,680 parts per million by volume and a vegetated land surface without major Antarctic glaciation, highlighting the important cooling effect exerted by ice albedo under high levels of atmospheric carbon dioxide.

It's a stunning discovery from a number of perspectives.  First, just the wonderment of realizing that the climate could change so drastically.  Note that this wasn't, or at least wasn't entirely, because of tectonic movement; the site of the find was still only eight degrees shy of the South Pole even back then.  Despite that, the warmth supported a tremendous assemblage of life, including hypsilophodontid dinosaurs, labyrinthodontid amphibians, and a diverse flora including conifers, cycads, and ferns.  (And given that at this point Antarctica and Australia were still connected, Lovecraft's vision of the home of the Yith was remarkably accurate.)

So, if it wasn't latitude that caused the warm climate, what was it?  The other thing that jumps out at me is the high carbon dioxide content of the atmosphere back then -- 1,000 parts per million.  Our current levels are 410 parts per million, and going up a steady 2.5 ppm per year.  I know I've rung the changes on this topic often enough, but I'll say again -- this is not a natural warm-up, like the Earth experienced during the mid-Cretaceous.  This is due to our out-of-control fossil fuel use, returning to the atmosphere carbon dioxide that has been locked up underground for hundreds of millions of years.  When the tipping point will occur, when we can no longer stop the warm up from continuing, is still a matter of debate.  Some scientists think we may already have passed it, that a catastrophic increase in temperature is inevitable, leading to a complete melting of the polar ice caps and a consequent rise in sea level of ten meters or more.

What no informed and responsible person doubts any more is that the warm-up is happening, and that we are the cause.  People who are still "global warming doubters" (I'm not going to dignify them by calling them skeptics; a skeptic respects facts and evidence) are either woefully uninformed or else in the pockets of the fossil fuel interests.

I don't mean to end on a depressing note.  The Klages et al. paper is wonderful, and gives us a vision of an Earth that was a very different place than the one we now inhabit, and highlights that what we have now is different yet from what the Earth will look like a hundred million years in the future.  It brings home the evocative lines from Alfred, Lord Tennyson's wonderful poem "In Memoriam:"

There rolls the deep where grew the tree.
O Earth, what changes hast thou seen?
There where the long road roars hath been
The stillness of the central sea.
The hills are shadows, and they flow
From form to form, and nothing stands;
They melt like mist, the solid lands,
Like clouds, they shape themselves and go.