I'm fascinated with history, and have always been especially interested in times and places for which we have few records and, therefore, not much way of knowing what really went on.

I'm not sure if this is because I'm a fiction writer and rely a lot on imaginary realms of the mind to fill in the gaps, or if I just have a perverse enjoyment of setting myself up with impossible tasks.  My favorite time and place to read about is western Europe during the Dark Ages, in the centuries after the fall-ish of Rome.  I phrase it that way because just as Rome wasn't built in a day, neither did it fall in a day, as if the Hordes of Barbarians went through the gates and the Romans basically just dropped their swords and said, "Okay, fuck it, we give up."  In fact, the aforementioned hordes weren't themselves a single unit; starting in the fourth century C.E., various tribes and sub-tribes of Celts, Goths, Huns, Scythians, et al. kind of chipped away at the empire until there wasn't much left of it.  The Western Roman Empire collapsed first, but the Eastern persisted for a while longer, devolving into chaos more than once -- nearly falling apart entirely during the mid-sixth-century Plague of Justinian, that wiped out a quarter of Europe's population and seems to have exceeded the both the fourteenth-century Black Death and the twentieth-century Spanish flu for sheer number of victims.  (I dealt with that topic, and what may have caused it, a couple of years ago, if you want to read about what historians call "the worst century in history.")

Another time and place I find intriguing is the early years of ancient Egypt, once again because so little is known for sure about it.  Our knowledge of the Old Kingdom, First Intermediate Period, and Middle Kingdom -- up until around the sixteenth century B.C.E. -- is hampered not only because it was a long time ago and a lot of the records haven't survived, but because what records were kept weren't all that accurate.  Just as with a lot of other theocratic cultures, the scribes of early pharaonic Egypt were as invested in depicting the rulers as gods as they were with writing down an accurate account of what happened.  The result was a mishmash of actual history, divine genealogies, miracle stories, and whitewashing that makes teasing the truth from the fiction damn near impossible.

Not that I blame the scribes, mind you.  Keeping monarchs in good humor is a full-time job, and often doesn't end well.  I've recently been re-reading the Shakespearean history plays, and he, like the scribes, knew which side his bread was buttered on.  Shakespeare was writing during the reigns of Elizabeth I and James 1, and if you take a look at works like Richard II, Henry IV (parts 1 and 2), Henry V, Henry VI (parts 1, 2, and 3), Richard III, and especially Henry VIII, you'll pretty quickly notice that any ancestors of the monarchs he was writing for are depicted as good guys, while ones who weren't -- like the villainous King Richard III of the play -- are the opposite.  I love the history plays, and that sort of treatment makes for great theater, but honestly, "history" is kind of the last thing they actually are.

So all of this is a long-winded way of leading up to a paper I stumbled upon yesterday in Frontiers of Medicine entitled, "Computed Tomography Study of the Mummy of King Seqenenre Taa II: New Insights Into His Violent Death," by renowned scholars of ancient Egypt Sahir Saleem (of Cairo University) and Zahi Hawass (former Egyptian Minister of Antiquities).  Pharaoh Seqenenre Taa II was the second-to-last pharaoh of the Seventeenth Dynasty, and ruled over part of Egypt during the chaotic Second Intermediate Period, when much of Egypt was controlled by a race of "warrior kings" from what is now Israel, Jordan, and southern Lebanon called the Hyksos.

The constant fighting, along with a long run of weak, short-lived rulers, makes the Second Intermediate Period hard to parse, because records from that time are even more sparse than they were from the preceding dynasties.  We know that the pharaoh in question, Seqenenre Taa II, was killed in battle with the Hyksos, and after a short reign by his elder son, Kamose, his younger son Ahmose I took over, overcame and drove out the Hyksos, and became the first pharaoh of both the Eighteenth Dynasty and the New Kingdom, which saw the peak of pharaonic power.

Fortunately for us history buffs, the Egyptians did leave behind one thing that helps us to figure out what was going on back then -- mummified bodies of their leaders.  And despite the chaotic conditions of the Seventeenth Dynasty, Seqenenre Taa II's body has survived for almost 3,600 years, and now Saleem and Hawass have done a CT scan to see if they can figure out more about him.

The hints from the records of the time that Seqenenre Taa II died in battle are almost certainly correct.  He had multiple injuries, including wounds that appear to have been made with an axe, a dagger, a club, and a spear.  (It's grimly amusing that several times in the paper, during the description of each injury, the authors say "this blow was probably fatal," as if the poor man got killed over and over.)  Most interesting, injury to his wrists suggests his hands had been tied behind his back -- and that he probably was captured in battle, possibly injured at the time, and afterward executed. 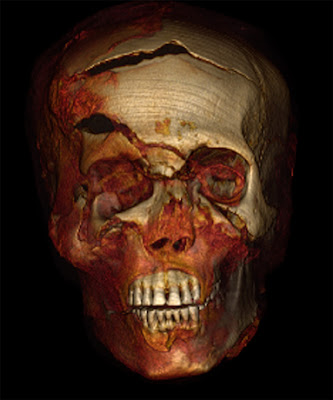 "This suggests that Seqenenre was really on the front line with his soldiers risking his life to liberate Egypt," said study lead author Dr. Sahar Saleem, in a press release.  "In a normal execution on a bound prisoner, it could be assumed that only one assailant strikes, possibly from different angles but not with different weapons.  Seqenenre's death was rather a ceremonial execution."

Which is gruesome but fascinating, and illustrates that parts of history that have seemed like closed books may one day be understood using cutting-edge techniques from science.  And a bit of luck; the information about the unfortunate pharaoh only is available to us because his mummified body survived for three and a half millennia.  But it does mean that we haven't uncovered everything there is to study about cryptic and chaotic chapters in our history -- and that with diligence, ages that have appeared dark might eventually be illuminated.
*********************************
Back when I taught Environmental Science, I used to spend at least one period addressing something that I saw as a gigantic hole in students' knowledge of their own world: where the common stuff in their lives came from.  Take an everyday object -- like a sink.  What metals are the faucet, handles, and fittings made of?  Where did those metals come from, and how are they refined?  What about the ceramic of the bowl, the pigments in the enamel on the surface, the flexible plastic of the washers?  All of those substances came from somewhere -- and took a long road to get where they ended up.
Along those same lines, there are a lot of questions about those same substances that never occur to us.  Why is the elastic of a rubber band stretchy?  Why is glass transparent?  Why is a polished metal surface reflective, but a polished wooden surface isn't?  Why does the rubber on the soles of your running shoes grip -- but the grip worsens when they're wet, and vanishes entirely when you step on ice?
If you're interested in these and other questions, this week's Skeptophilia book-of-the-week is for you.  In Stuff Matters: Exploring the Marvelous Materials that Shape Our Man-Made World, materials scientist Mark Miodownik takes a close look at the stuff that makes up our everyday lives, and explains why each substance we encounter has the characteristics it has.  So if you've ever wondered why duct tape makes things stick together and WD-40 makes them come apart, you've got to read Miodownik's book.
[Note: if you purchase this book using the image/link below, part of the proceeds goes to support Skeptophilia!]