The haunting of Hinton Ampner

On her mom's side, my wife is descended from English nobility, a fact of which she reminds me periodically when I get uppity.  Her great-great grandfather, one William R. Hylton, was born in Jamaica to a family of British sugar planters, and the line (if you extend it back far enough) includes not only the Mad Baron Hylton (about whom I should write another time) but a woman named "Benedicta de Shelving," a member of the Norman gentry named "Marmaduke de Thweng," and best of all, an illegitimate daughter of King Edward IV.

One of her ancestors on the maternal side of her Hylton lineage is a Rachel (Ricketts) Johnson, who would have been (if I'm counting correctly) the aforementioned William R. Hylton's great-great grandmother.  I found out quite by accident that Rachel is related to the central figures in one of Britain's creepiest ghost stories -- the tale of the haunting of Hinton Ampner, a mansion in Hampshire.

Hinton Ampner was built in the 1620s, during the reign of James I, by one Sir Thomas Stewkeley.  Sir Thomas's great-grandson Hugh had no male heirs; his daughter, Mary, married Edward Stawell, a nobly-descended young man who was also apparently a little loose on the morals side.  Despite this, Stawell was appointed as Sir Hugh's heir.

After his father-in-law's death, Stawell apparently decided that he could get away with whatever he wanted, and he invited his wife's beautiful young sister, Honoria, to come live with them at Hinton Ampner.  Mary Stawell died shortly afterwards -- an eventuality that many of their neighbors found convenient -- and he lived there with Honoria (carrying on, sources say, in "a scandalous manner") until her death in 1754.  Stawell himself died the following year, and some claimed that the couple's demise was "divine retribution" for their having done away with an illegitimate child born to the union -- perhaps more than one.

Be that as it may, the house was purchased and then rented out to William Henry Ricketts (cousin to Carol's forebear Rachel (Ricketts) Johnson) and his wife, Mary (Jervis) Ricketts.  William was frequently away for long periods of time -- as I mentioned earlier, he and his family had ties to Jamaica, and voyages across the Atlantic were dangerous and drawn-out affairs -- but Mary was a no-nonsense, down-to-earth type who was quite up to the task of running a household (including their three children and a bevy of servants) by herself.

Whether she was up to dealing with ghosts remains to be seen.

The haunting, if such it was, started out slowly.  Mr. and Mrs. Ricketts both heard noises at night, prompting them on more than one occasion to awaken the servants for a thorough search of the house, which turned up nothing.  Then the nurse to the Ricketts's infant son saw a "man in drab clothes" walk into "the Yellow Room" -- Mary Ricketts's own bedroom.

Once again a search found no one.

Events accelerated.  Servants saw not only the apparition of the drab-clothed man, but a woman in a silk dress. "Dismal moans" were heard at night, and doors opened and quietly shut by themselves.  Mary Ricketts, at first scornful of the claims of the servants, began to experience them herself -- especially when the disturbances intensified while her husband was away in Jamaica in 1769.  She was terrified one night to hear heavy, plodding footsteps near her bed, and in the days following began to make inquiries in the neighborhood regarding the history of the house.  She found only one curious story -- an elderly man who said that a long-time friend of his, who was a carpenter, had been summoned to the house while old Sir Hugh Stewkeley was still alive to pull up some of the floorboards in the dining room.  The carpenter saw Stewkeley and his son-in-law, the depraved Edward Stawell, place something in the space underneath.  The carpenter was ordered to replace the floorboards -- and not to tell a soul what he'd seen, on pain of death.  (A threat the carpenter either didn't believe, or didn't break until Stewkeley and Stawell were both dead themselves.)

Oddly, Mary Ricketts didn't have the floorboards pried up to determine the truth of the claim.  She was apparently reluctant to ascribe the occurrences to ghosts.  But even she began to have second thoughts when the haunting continued to worsen.  A strange murmuring could be heard in several rooms in the house, which sometimes resolved itself into intelligible words. Not only did Mary hear it, but so did her brother, the famous British Navy officer Captain John Jervis, who wrote about it in his journal (a document that still exists today in a museum in London).  They also heard a tremendous "rushing sound," like a great wind, that would "fall with infinite velocity and force" upon a room, without a breath of air stirring. 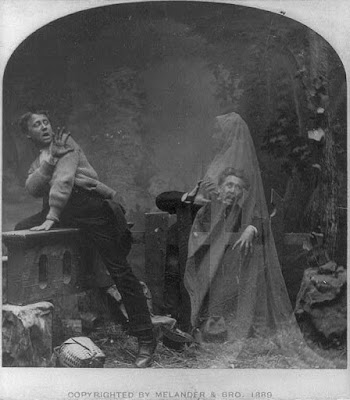 [Image is in the Public Domain]
Mary wrote about the entire story herself in a narrative that was given for publication to The Gentleman's Magazine by her descendants in 1872.  Throughout the tale, Mary strikes you as sane, calm, and collected, always looking for rational explanations, and not immediately leaping to the conclusion that ghosts were to blame.  One passage reads as follows:

Thoroughly convinced there were persons in the lobby before I opened the door, I asked her [Mary's servant Elizabeth Godin] if she saw no one there.  On her replying in the negative, I went out to her, examined the window that was shut, looked under the couch, the only furniture of concealment there; the chimney board was fastened, and when removed all was clear behind it.  She found the door into the lobby shut, as it was every night.  After this examination, I stood in the middle of the room, pondering with astonishment, when suddenly the door that opens into the little recess leading to the yellow apartment sounded as if played to and fro by a person standing behind it.  This was more than I could bear unmoved.  I ran into the nursery and rang the bell there that goes into the men's apartment.

I think if it'd been me, "not unmoved" would have been putting it mildly.  I think I would have fallen more into the "pissing my pants and then having a stroke" category.

Eventually, however, even Mary's stalwart patience was tried to the limit.  During his stay, her brother -- who is certainly a credible witness if anyone is -- heard groans, banging, dragging footsteps, and (on one occasion) a gunshot.  None of the noises seemed to have a corporeal source.  Jervis pressed his sister to leave the mansion, which she did in 1771.  Its owners were understandably unable to find anyone else who would rent the place, and shortly afterwards Hinton Ampner was demolished.

Okay, I know, you can't put much weight into anecdote, but this story to me has some characteristics that have the ring of truth.  I think it's the open-endedness of it that is the most persuasive, and the most creepy as well.  A lot of ghost stories have predictable endings -- the haunting ends when a skeleton is unearthed and reburied in hallowed ground, when the guilty party is arrested for a murder, when well-deserved revenge is taken against a killer.  Here, we have two seemingly reliable people recounting experiences that have no easy wrap-up.  In the end, Mary Ricketts and her family moved away, John Jervis went on to win the Battle of St. Vincent, and the haunted house itself was torn down.

So I find this a pretty cool story, even though I wouldn't call myself a true believer by any stretch.  Cool, too, that we have a family connection to the main characters; in fact, Captain John Jervis had no children of his own and chose as his heir Mary's son Edward Jervis Ricketts, who spent his childhood in Hinton Ampner, and who would be Carol's third cousin several times removed.  But whether it's true or not, and whether the explanation is supernatural or entirely rational, I still think it's a good tale to add a few extra chills to a chilly gray day in midwinter.
*********************************
Science writer Elizabeth Kolbert established her reputation as a cutting-edge observer of the human global impact in her wonderful book The Sixth Extinction (which was a Skeptophilia Book of the Week a while back).  This week's book recommendation is her latest, which looks forward to where humanity might be going.
Under a White Sky: The Nature of the Future is an analysis of what Kolbert calls "our ten-thousand-year-long exercise in defying nature," something that immediately made me think of another book I've recommended -- the amazing The Control of Nature by John McPhee, the message of which was generally "when humans pit themselves against nature, nature always wins."  Kolbert takes a more nuanced view, and considers some of the efforts scientists are making to reverse the damage we've done, from conservation of severely endangered species to dealing with anthropogenic climate change.
It's a book that's always engaging and occasionally alarming, but overall, deeply optimistic about humanity's potential for making good choices.  Whether we turn that potential into reality is largely a function of educating ourselves regarding the precarious position into which we've placed ourselves -- and Kolbert's latest book is an excellent place to start.
[Note: if you purchase this book using the image/link below, part of the proceeds goes to support Skeptophilia!]