The iconic movie Jurassic Park has provided us with quite a number of quotable lines:

"I hate it when I'm always right."

"That is one big pile of shit."

"Hold onto your butts."

But as someone who has studied (and taught) evolution for decades, none of them has stuck in my mind like Ian Malcolm's pronouncement, "Life... uh... finds a way."

This short sentence sums up something really profound; however the Earth's ecosystems are damaged, they always bounce back.  Even after the catastrophic Permian-Triassic Extinction -- which by some estimates wiped out 90% of the existing taxa on Earth -- there was a recovery and rediversification.

Note that I'm not saying that means it was a good thing.  The end Permian extinction event was, it is believed, caused by an unimaginably huge series of volcanic eruptions, followed by a major spike in the carbon dioxide content of the atmosphere -- leading to a jump in the global temperature and catastrophic oceanic anoxia.

So yeah.  "Life survived" doesn't mean it'd have been a fun event to live through.  But it should give us hope that the damage humans can do to the Earth as a whole is, in the grand scheme of things, short-lived.

As an encouraging example of this, take a recent study out of the University of Florida on snail kites.  These birds, related to hawks and falcons, are serious food specialists; they eat only one species of snail, found in salt marshes like the Everglades (and also parts of Central America; I first saw snail kites in Belize).  When things are stable, being a specialist is a good thing -- you pretty much corner the market on a particular resource, like the South American hummingbird species whose bills are shaped to fit one and only one species of flower.  The snail kite's food finickiness is this same sort of thing, and as long as the Everglades was undamaged and had an abundant supplies of snails, all was well. 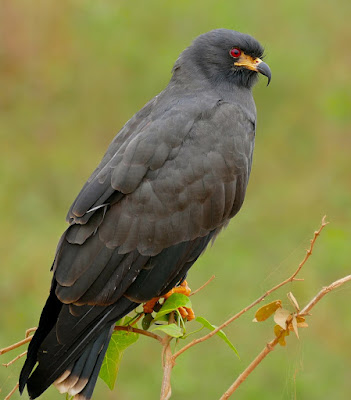 But when the environment is rapidly changing, either through human effects or because of natural events, being a specialist is seriously precarious.  When a new species of snail -- the island apple snail -- was introduced to the Everglades, its larger size and voracious appetite outcompeted the native snails, and the snail kites were in trouble because their bills weren't large and heavy enough to tackle the bigger prey.

Snail kites were already on the Endangered Species List, given that the Everglades has been massively damaged by human activity.  This, it seemed, might be the death blow to the Florida population of this striking bird.

The snail kite, in a near-perfect reenactment of the bill diversification in Darwin's finches in the Galapagos, had a variety of bill sizes.  Genetic diversity, despite their extreme specialization.  Before the introduction of the island apple snail, bill size probably didn't make much difference, positive or negative, to the individual birds.  But now, large bills were a serious advantage.  The birds with the biggest bills could tackle the larger snail species -- meaning they had a copious food source that their smaller-billed cousins couldn't utilize.

And in the thirteen years since the introduction of the island apple snail, the average bill size has gone up dramatically -- and the overall population is rebounding.

"Beak size had been increasing every year since the invasion of the snail from about 2007,” said Robert Fletcher, who co-authored the study.  "At first, we thought the birds were learning how to handle snails better or perhaps learning to forage on the smaller, younger individual snails...  We found that beak size had a large amount of genetic variance and that more variance happened post-invasion of the island apple snail.  This indicates that genetic variations may spur rapid evolution under environmental change."
As I said earlier, this is not meant to give the anti-environmental types another reason to say, "Meh, we don't have to change what we're doing, things'll be okay regardless."  Most species aren't as fortunate as the snail kites, already having the genetic diversity to cope with a sudden change.  Much more likely, if we keep doing what we're doing, the specialist species in the world will simply be wiped out.
Whether we'll be able to survive in such a changed world remains to be seen.
But one thing is nearly certain; even if we catastrophically damage the global ecosystem, it will rebound eventually.  Which is hopeful, as far as it goes.  Even after Homo sapiens is another fossilized footnote in the Earth's geological history, life will persist -- once more generating, in Darwin's immortal words, "endless forms most beautiful and most wonderful."