The oddest star in the galaxy

O day and night, but this is wondrous strange!

And therefore as a stranger give it welcome.

There are more things in heaven and earth, Horatio,

Than are dreamt of in your philosophy.

Horatio and Hamlet, of course, are talking about ghosts and the supernatural, but it could equally well be applied to science.  It's tempting sometimes, when reading about new scientific discoveries, for the layperson to say, "This can't possibly be true, it's too weird."  But there are far too many truly bizarre theories that have been rigorously verified over and over -- quantum mechanics and the General Theory of Relativity jump to mind immediately -- to rule anything out based upon our common-sense ideas about how the universe works.

That was my reaction while reading an article sent by a loyal reader of Skeptophilia about an astronomical object I'd never heard of -- Przybylski's Star, named after its discoverer, Polish-born Australian astronomer Antoni Przybylski -- a star 355 light years from Earth, in the constellation of Centaurus, which is weird in so many ways that it kind of boggles the mind.

Przybylski's Star is classified as a Type Ap star.  Type A stars are young, compact, and very hot; the brightest star in the night sky, Sirius, is in this class.

The "p" stands for "peculiar."

You probably know that most ordinary stars are primarily composed of hydrogen, and of the bit that's not hydrogen, most of it is helium.  Hydrogen is the fuel for the fusion in the core of the star, and helium is the product formed by that fusion.  Late in their life, many stars undergo core collapse, in which the temperatures heat up enough to fuse helium into heavier elements like carbon and oxygen.  Most of the rest of the elements on the periodic table are generated in supernovas and in neutron stars, a topic I dealt with in detail in a post I did last year.

My point here is that if you look at the emission spectra of your average star, the spectral lines you see should mostly be the familiar ones from hydrogen and helium, with minuscule traces of the spectra of other elements.  The heaviest element that should be reasonably abundant, even in the burned-out cores of stars, is iron -- it represents the turnaround point on the curve of binding energy, the point where fusion into heavier elements starts taking more energy than it releases.

So elements that are low in abundance pretty much everywhere, such as the aptly-named rare earth elements (known to chemists as the lanthanides), should be so uncommon as to be effectively undetectable.  Short-lived radioactive elements like thorium and radium shouldn't be there at all, because they don't form in the core of your ordinary star, and therefore any traces present had to have formed prior to the star in question's formation -- almost always, enough time that they should have long since decayed away.

The composition of Przybylski's Star, on the other hand, is so skewed toward heavy elements that it elicits more in the way of frustrated shrugs than it does in viable models that could account for it.  It's ridiculously high in lanthanides like cerium, dysprosium, europium, and gadolinium -- not elements you hear about on a daily basis.  There's more praseodymium in the spectrum of its upper atmosphere than there is iron.  Even stranger is the presence of very short-lived radioactive elements such as actinium, americium, and plutonium.

So where did they come from?

"What we’d like to know... is how the heavy elements observed here have come about," said astronomy blogger Paul Gilster.  "A neutron star is one solution, a companion object whose outflow of particles could create heavy elements in Przybylski’s Star, and keep them replenished.  The solution seems to work theoretically, but no neutron star is found anywhere near the star."

"[T]hat star doesn’t just have weird abundance patterns; it has apparently impossible abundance patterns," said Pennsylvania State University astrophysicist Jason Wright, in his wonderful blog AstroWright.  "In 2008 Gopka et al. reported the identification of short-lived actinides in the spectrum.  This means radioactive elements with half-lives on the order of thousands of years (or in the case of actinium, decades) are in the atmosphere...  The only way that could be true is if these products of nuclear reactions are being replenished on that timescale, which means… what exactly?  What sorts of nuclear reactions could be going on near the surface of this star?"

All the explanations I've seen require so many ad-hoc assumptions that they're complete non-starters.  One possibility astrophysicists have floated is that the replenishment is because it was massively enriched by a nearby supernova, and not just with familiar heavy elements like gold and uranium, but with superheavy elements that thus far, we've only seen produced in high-energy particle accelerators -- elements like flerovium (atomic number 114) and oganesson (atomic number 118).  These elements are so unstable that they have half-lives measured in fractions of a second, but it's theorized that certain isotopes might exist in an island of stability, where they have much longer lives, long enough to build up in a star's atmosphere and then decay into the lighter, but still rare, elements seen in Przybylski's Star.

There are a couple of problems with this idea, the first being that every attempt to find where the island of stability lies hasn't succeeded.  Physicists thought that flerovium might have the "magic number" of protons and neutrons to make it more stable, but a paper just last month seems to dash that hope.

The second, and worse, problem is that there's no supernova remnant anywhere near Przybylski's Star.

Which brings me to the wildest speculation about the weird abundances of heavy elements.  You'll never guess who's responsible. 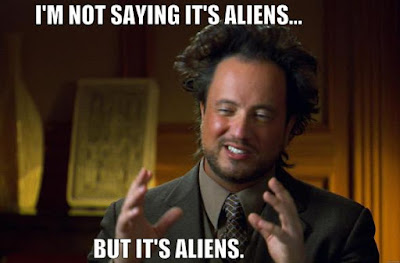 There is a serious suggestion out there -- and by "serious," I mean made by professional, highly-respected astrophysicists, not cranks, wackos, or bloggers.  (Irony intended.)  The idea here is that an advanced technological civilization might have struck on the solution for nuclear waste of dumping it into the nearest star.  This explanation, bizarre as it sounds, would explain not only why the elements are there, but why they're way more concentrated in the upper atmosphere of the star than in the core.

"Here on Earth, he notes, people sometimes propose to dispose of our nuclear waste by throwing it into the Sun,” Wright writes.  “Seven years before Superman thought of the idea, Whitmire & Wright (not me, I was only 3 in 1980) proposed that alien civilizations might use their stars as depositories for their fissile waste.  They even pointed out that the most likely stars we would find such pollution in would be… [type] A stars!  (And not just any A stars, late A stars, which is what Przybylski’s Star is).  In fact, back in 1966, Sagan and Shklovskii in their book Intelligent Life in the Universe proposed aliens might 'salt' their stars with obviously artificial elements to attract attention."

A curious side note is that I've met (Daniel) Whitmire, of Whitmire & Wright -- he was a professor in the physics department of the University of Louisiana when I was an undergraduate, and I took a couple of classes with him (including Astronomy).  He was known for his outside-of-the-box ideas, including that a Jupiter-sized planet beyond the orbit of Pluto was responsible for disturbing the Oort Cloud as it passed through every hundred million years or so (being so far out, it would have a super-long rate of revolution).  This would cause comets, asteroids, and other debris to rain in on the inner Solar System, resulting in a higher rate of impacts with the Earth -- and explaining the odd cyclic nature of mass extinctions.

So I'm not all that surprised about Whitmire's suggestion, although it bears mention that he was talking about the concept in the purely theoretical sense; the weird spectrum of Przybylski's Star was discovered after Whitmire & Wright's paper on the topic.

So we're left with a mystery.  The "it's aliens" explanation is hardly going to be accepted by the scientific establishment without a hell of a lot more evidence, and thus far, there is none.  The peculiar abundance of heavy elements in this very odd star remains unaccounted-for by any science we currently understand.