The universe is a dangerous place.

I'm not talking about crazy stuff happening down here on Earth, although a lot of that certainly qualifies.  The violence we wreak upon each other (and by our careless actions, often upon ourselves) fades into insignificance by comparison to the purely natural violence out there in the cosmos.  Familiar phenomena like black holes and supernovas come near the top of the list, but there are others equally scary whose names are hardly common topics of conversation -- Wolf-Rayet stars, gamma-ray bursters, quasars, and Thorne-Zytkow objects come to mind, not to mention the truly terrifying possibility of a "false vacuum collapse" that I wrote about here at Skeptophilia a while back.

It's why I always find it odd when people talk about the how peaceful the night sky is, or that the glory of the cosmos supports the existence of a benevolent deity.  Impressive?  Sure.  Awe-inspiring?  Definitely.

Benevolent?  Hardly.  The suggestion that the universe was created to be the perfectly hospitable home to humanity -- the "fine-tuning" argument, or "strong anthropic principle" -- conveniently ignores the fact that the vast majority of the universe is intrinsically deadly to terrestrial life forms, and even here on Earth, we're able to survive the conditions of less than a quarter of its surface area.

I'm not trying to scare anyone, here.  But I do think it's a good idea to keep in mind how small and fragile we are.  Especially if it makes us more cognizant of taking care of the congenial planet we're on.

In any case, back to astronomical phenomena that are big and scary and can kill you.  Even the ones we know about don't exhaust the catalog of violent space stuff.  Take, for example, the (thus far) unexplained invisible vortex that is tearing apart the Hyades.

The Hyades is a star cluster in the constellation Taurus, which gets its name from the five sisters of Hyas, a beautiful Greek youth who died tragically.  Which brings up the question of whether any beautiful Greek youths actually survived to adulthood.  When ancient Greeks had kids, if they had a really handsome son, did they look at him and shake their heads sadly, and say, "Well, I guess he's fucked"?

To read Greek mythology, you get the impression that the major cause of death in ancient Greek was being so beautiful it pissed the gods off.

Anyhow, Hyas's five sisters were so devastated by the loss of their beloved brother that they couldn't stop crying, so the gods took pity on them even though Zeus et al. were the ones who caused the whole problem in the first place, and turned them into stars.  Which I suppose is better than nothing.  But even so the sisters' weeping wouldn't stop -- which is why the appearance of the Hyades in the sky in the spring is associated with the rainy season.  (In fact, in England the cluster is called "the April rainers.") 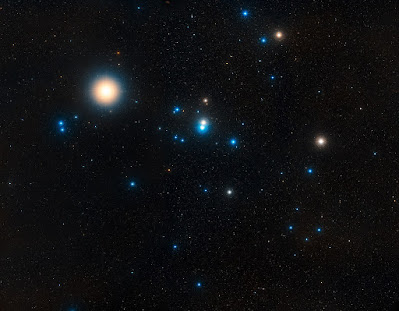 In reality, the Hyades have nothing to do with rain or tragically beautiful Greek youths.  They are a group of fairly young stars, on the order of 625 million years old (the Sun is about ten times older), and like most clusters was created from a collapsing clump of gas.  The Hyades are quite close to us -- 153 light years away -- and because of that have been intensively studied.  Like many clusters, the tidal forces generated by the relative motion of the stars is gradually pulling them away from each other, but here there seems to be something else, something far more violent, going on.

A press release from the European Space Agency this week describes a study of the motion of the stars in the Hyades indicating that their movements aren't the ordinary gentle dissipation most clusters undergo.  A team led by astrophysicist Tereza Jerabkova used data from the European Southern Observatory to map members of the cluster, and to identify other stars that once were part of the Hyades but since have been pulled away, and they found that the leading "tidal tail" -- the streamer of stars out ahead of the motion of the cluster as a whole -- has been ripped to shreds.

The only solution Jerabkova and her team found that made sense of the data is that the leading tail of the Hyades collided -- or is in the process of colliding -- with a huge blob of some sort, containing a mass ten million times that of the Sun.  The problem is, an object that big, only 153 light years away, should be visible, or at least detectable, and there seems to be nothing there.

"There must have been a close interaction with this really massive clump, and the Hyades just got smashed," Jerabkova said.
So what is this "really massive clump" made of?  Given the absence of anything made of ordinary matter that is anywhere nearby, the team suggests that it might be something more exotic -- a "dark matter sub-halo."  These hypothesized objects could be scattered across the universe, and might provide the energetic kick to objects whose trajectories can't be explained any other way.  But what exactly they are other than a bizarre phantom gravitational whirlpool, no one knows.
Nor what the risk is if we're close to one.
So add "dark matter sub-halos" to our list of scary astronomical phenomena.  I find the whole thing fascinating, and a little humbling.  I'll still find the beauty of a clear night sky soothing, but that's only if I can get my scientific mind to shut the hell up long enough to enjoy it.  Because the truth is, a lot of those twinkling lights are anything but peaceful.
But I suppose it's still better than the gods killing you if you're too handsome.  That would just suck, not that I'd be likely to be on the receiving end of it anyhow.
******************************************
Last week's Skeptophilia book-of-the-week, Simon Singh's The Code Book, prompted a reader to respond, "Yes, but have you read his book on Fermat's Last Theorem?"
In this book, Singh turns his considerable writing skill toward the fascinating story of Pierre de Fermat, the seventeenth-century French mathematician who -- amongst many other contributions -- touched off over three hundred years of controversy by writing that there were no integer solutions for the equation  an + bn = cn for any integer value of n greater than 2, then adding, "I have discovered a truly marvelous proof of this, which this margin is too narrow to contain," and proceeding to die before elaborating on what this "marvelous proof" might be.
The attempts to recreate Fermat's proof -- or at least find an equivalent one -- began with Fermat's contemporaries, Evariste de Gaulois, Marin Mersenne, Blaise Pascal, and John Wallis, and continued for the next three centuries to stump the greatest minds in mathematics.  It was finally proven that Fermat's conjecture was correct by Andrew Wiles in 1994.
Singh's book Fermat's Last Theorem: The Story of a Riddle that Confounded the World's Greatest Minds for 350 Years describes the hunt for a solution and the tapestry of personalities that took on the search -- ending with a tour-de-force paper by soft-spoken British mathematician Andrew Wiles.  It's a fascinating journey, as enjoyable for a curious layperson as it is for the mathematically inclined -- and in Singh's hands, makes for a story you will thoroughly enjoy.
[Note: if you purchase this book using the image/link below, part of the proceeds goes to support Skeptophilia!]