I ran across two stories yesterday that fall squarely into the "You People Do Realize You Have Bigger Problems To Worry About, Right?" department.

In the first, we have a senior Saudi cleric who has issued a fatwa on people taking selfies with cats.  Well, not just with cats.  Also with wolves.  But since cat selfies are way more common than wolf selfies (more's the pity), I can see why he specifically mentioned the cats.

The subject came up because of a question asked at a talk that Sheikh Saleh Bin Fawzan Al-Fawzan was giving, in which someone asked about a "new trend of taking pictures with cats which has been spreading among people who want to be like westerners."  Al-Fazwan was aghast.

Because that's evidently an ambiguous phrase, or something.  Maybe it has subtleties in Arabic I don't know about.

So the questioner clarified, and after he got over his outrage, Al-Fazwan gave his declaration.  "Taking pictures is prohibited," he said.  "The cats don't matter here."

Which is kind of odd, given that he was being filmed at the time.  But rationality has never been these people's strong suit.

"Taking pictures is prohibited if not for a necessity," Al-Fazwan went on to say.  "Not with cats, not with dogs, not with wolves, not with anything." 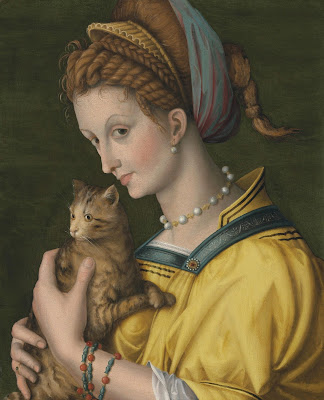 Wipe that smirk off your face, young lady.  Allah does not approve of you and Mr. Whiskers.
So alrighty, then.  Now that we've got that settled, let's turn to another thing a prominent Muslim cleric is worrying about, which is: gay sex.

Of course, gay sex seems to be on these people's minds a lot, and also on the minds of their siblings-under-the-skin the Christian evangelicals.  But this time, the cleric in question, Mallam Abass Mahmud of Ghana, has said that the practice is not only prohibited because it's naughty in Allah's sight (although it certainly is that as well), but because it causes...
... earthquakes.

"Allah gets annoyed when males engage in sexual encounter," Mahmud said in an interview, then went on to add, "Such disgusting encounter causes earthquakes."

As an example, he says that this is why Sodom and Gomorrah were destroyed.  Although as I recall from my reading of Genesis chapter 19, it wasn't an earthquake in that case, but having "fire and brimstone rained down upon them... so that the smoke of the country went up as the smoke of a furnace."  But I guess since gays are apparently the most powerful force of nature known, there's no reason why they couldn't also cause a volcanic eruption or something.

On the other hand, if two guys having sex is causing the ground to shake, they must really be enjoying themselves.  I don't know whether to feel scared or jealous.

What crosses my mind with all of this is that there are a few more urgent concerns in the Muslim world than worrying about cat selfies and guys making love.  Human rights, tribalism, poverty, wealth inequity, corruption, terrorism, radical insurgencies, drought.  To name a few.  You have to wonder if focusing their followers on nonsense is simply a way of keeping the hoi polloi from realizing what a horror much of the Middle East has become under the leadership of people like this.

And given the reactions they got -- which, as far as I can tell, were mostly nodding in agreement -- it appears to be working.  So if you go to Saudi Arabia or Ghana, just remember: no kitty selfies or gay sex.  Or, Allah forfend, you and your gay lover having sex then celebrating by taking a photograph of the two of you with your cat.  That'd probably just cause the Earth to explode or fall into the Sun or something.
************************************
This week's Skeptophilia book recommendation is pure fun: Arik Kershenbaum's The Zoologist's Guide to the Galaxy: What Animals on Earth Reveal About Aliens and Ourselves.  Kershenbaum tackles a question that has fascinated me for quite some time; is evolution constrained?  By which I mean, are the patterns you see in most animals on Earth -- aerobic cellular respiration, bilateral symmetry, a central information processing system/brain, sensory organs sensitive to light, sound, and chemicals, and sexual reproduction -- such strong evolutionary drivers that they are likely to be found in alien organisms?
Kershenbaum, who is a zoologist at the University of Cambridge, looks at how our environment (and the changes thereof over geological history) shaped our physiology, and which of those features would likely appear in species on different alien worlds.  In this fantastically entertaining book, he considers what we know about animals on Earth -- including some extremely odd ones -- and uses that to speculate about what we might find when we finally do make contact (or, at the very least, detect signs of life on an exoplanet using our earthbound telescopes).
It's a wonderfully fun read, and if you're fascinated with the idea that we might not be alone in the universe but still think of aliens as the Star Trek-style humans with body paint, rubber noses, and funny accents, this book is for you.  You'll never look at the night sky the same way again.
[Note: if you purchase this book from the image/link below, part of the proceeds goes to support Skeptophilia!]