Getting to the essence

One of the fastest-growing areas of alternative medicine is "essential oils."

Essential oils are at least something real; it's one step better than homeopathy, for example, which is charging money for water and/or sugar pills from which all biologically active compounds have been removed by serial dilution.  These oils are concentrated extracts of plants containing aromatic compounds, which the plants themselves make for a variety of reasons, including discouraging insects from eating the leaves, attracting pollinators, or encouraging animals to eat the fruits and disperse the seeds.

The claim is that these oils have positive health effects of all sorts, but when you start looking deeper, you find that a lot of times, what the essential oil companies have to say is pretty vague.  Here's one typical example, and a few representative quotes from the website:

So, in essence *rimshot* -- oils are good because they've been used by people for a long time, they're all-natural, and they smell nice.  We know this because... um... reasons.  Each one is useful for something different, because they're so versatile. 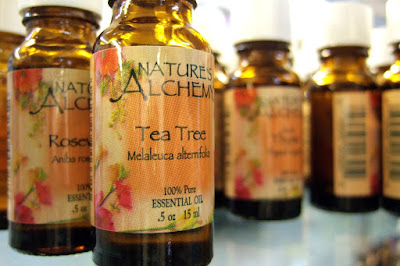 [Image licensed under the Creative Commons Stephanie (strph) from Oklahoma City, USA, Teatreeoil, CC BY-SA 2.0]
The problem is, there's little scientific support for the claim that they'll accomplish anything but making you smell nice.  The site HealthLine has a page on essential oils, and you can tell they really really want to say how great they are, but can't quite find a way to do so without lying outright.  Over and over, they say things like this:
Even so, HealthLine has a list of particular oils and what they can be used for -- which is more than a little disingenuous.
The problem is, we now know that beyond essential oils probably not doing anything positive for your health -- they can also be dangerous.
A study that came out a couple of weeks ago in the journal Epilepsy Research looked at a group of seizure sufferers in India, and found something staggering.  Here's a quote from The Academic Times that summarizes what they discovered:

[P]atients at four South Indian hospitals who had a seizure were evaluated for the use of camphor and eucalyptus essential oils.  Analyzing 350 seizure cases that spanned a four-year period, researchers found that 15.7%, or the seizures of 55 of the patients, may have been induced by the inhalation, ingestion, or topical use of essential oils.

Now, if you're gonna shout at me that this is correlation, not causation -- that the oil use may have been present in the patients, but not caused the seizures -- check out the next bit:

The patients were asked to stop their exposure to these essential oils and the products that contained them.  The researchers then followed up with the patients for a period of 1-3 years to monitor any recurrence of seizures.  All of the non-epileptic patients had been treated with anti-seizure medication, but for only two to four weeks following their first seizure, and none of them had a recurrence of seizures in the entire 1-3 year monitoring period after stopping their exposure to essential oils.  And 94% of the epileptic patients also remained seizure-free during the follow-up period.

Not proof, but certainly mighty suggestive.
A couple of years ago the journal Evidence-Based Complementary and Alternative Medicine published an article describing a comprehensive overview of essential oils and their connection to seizures.  The results: some essential oils have potential uses as anticonvulsants, but a much longer list have been associated with causing seizures.  Which, if you know any chemistry, is exactly what you'd expect; each essential oil contains a different set of compounds, so each one is going to interact with your body differently, and carry with it its own set of potential benefits and risks.
But that's not what the people selling essential oils tell you.  Their claim is that they're all beneficial, then wave their hands around when you ask them how they know this.  (This is called the package-deal fallacy, and is exactly the same mistake a lot of anti-GMO people make; they say "GMO = bad" without acknowledging that since clearly all genes don't do the same thing, implanting said genes in other organisms isn't going to have the same effect for each, good or bad.)
And one other thing: if an alternative health practice is getting the suspicious side-eye from Evidence-Based Complementary and Alternative Medicine -- which I'd expect to be biased toward stuff like this -- it's worth listening to.
So if you're using essential oils, it might be prudent to stop.  Or at least investigate what, if anything, scientists know about the specific essential oil you like to use.  The vast majority of evidence is that other than smelling nice, they're probably not doing much for you, and there is an increasing body of data suggesting that some of them have a real potential for dangerous side-effects.
I'll just end with a quote from the inimitable Tim Minchin, who in his brilliant monologue/poem "Storm," says, "There's a name for alternative medicine that works.  It's called... medicine."
****************************************
When people think of mass extinctions, the one that usually comes to mind first is the Cretaceous-Tertiary Extinction of 66 million years ago, the one that wiped out all the non-avian dinosaurs and a good many species of other types.  It certainly was massive -- current estimates are that it killed between fifty and sixty percent of the species alive at the time -- but it was far from the biggest.
The largest mass extinction ever took place 251 million years ago, and it destroyed over ninety percent of life on Earth, taking out whole taxa and changing the direction of evolution permanently.  But what could cause a disaster on this scale?
In When Life Nearly Died: The Greatest Mass Extinction of All Time, University of Bristol paleontologist Michael Benton describes an event so catastrophic that it beggars the imagination.  Following researchers to outcrops of rock from the time of the extinction, he looks at what was lost -- trilobites, horn corals, sea scorpions, and blastoids (a starfish relative) vanished completely, but no group was without losses.  Even terrestrial vertebrates, who made it through the bottleneck and proceeded to kind of take over, had losses on the order of seventy percent.
He goes through the possible causes for the extinction, along with the evidence for each, along the way painting a terrifying picture of a world that very nearly became uninhabited.  It's a grim but fascinating story, and Benton's expertise and clarity of writing makes it a brilliant read.
[Note: if you purchase this book using the image/link below, part of the proceeds goes to support Skeptophilia!]