Mimes in the brain

Maybe there's a reason why so many people despise mimes.
Okay, I know that seems like a non sequitur even for me, but the topic comes up because of a study by Patrick Little and Chaz Firestone (of Johns Hopkins University) called "Physically Implied Surfaces," which appeared this week in the journal Psychological Science.  And from this study, we find that the problem with watching a mime is that you can't help "seeing" the invisible wall or rope or cage or whatnot that (s)he is interacting with.
Apparently you can't ignore a mime even if you want to. 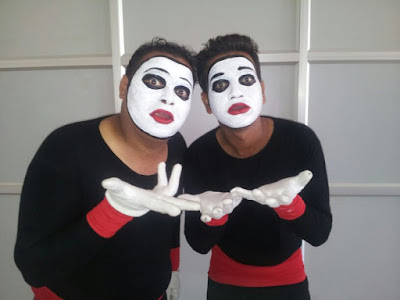 In addition to seeing objects that are directly in view, we also represent objects that are merely implied (e.g., by occlusion, motion, and other cues).  What can imply the presence of an object? Here, we explored (in three preregistered experiments; N = 360 adults) the role of physical interaction in creating impressions of objects that are not actually present.  After seeing an actor collide with an invisible wall or step onto an invisible box, participants gave facilitated responses to actual, visible surfaces that appeared where the implied wall or box had been—a Stroop-like pattern of facilitation and interference that suggested automatic inferences about the relevant implied surfaces.  Follow-up experiments ruled out confounding geometric cues and anticipatory responses.  We suggest that physical interactions can trigger representations of the participating surfaces such that we automatically infer the presence of objects implied only by their physical consequences.

The "Stroop-like pattern" the authors mention refers to the Stroop effect, wherein a test subject is given an image where there are the names of various colors represented in different colors of ink, but they don't match -- e.g. the word "green" is written in red ink.  The subject is then asked to state, as quickly as possible, the colors of each word, ignoring the word that's actually written and focusing only on the ink color.

It's quite difficult to do.  You are attempting to force your brain to ignore the textual information (the words themselves) and focus only on the colors, but the two interfere with each other so much -- and we're so geared to getting information by reading text -- that to do it accurately, most people have to concentrate and slow down, and still they make mistakes.

Here, the implied surfaces the mime is creating generate such a strong illusion that if they don't correspond with a visual indicator of where the surfaces are, we tend to believe the mime rather than the indicator.  For example, in one test, volunteers were asked to state whether a line superimposed on a video clip of a mime was horizontal or vertical.  In some of the clips the line was oriented the same way, and in the same position, as the "surface" the mime was creating; in other cases, they didn't agree.  In the latter case, test subjects were routinely tripped up -- they tended to answer based on the (invisible) surface the mime's actions indicated rather than the (visible) marker they were supposed to be focusing on.

"Very quickly people realize that the mime is misleading them, and that there is no actual connection between what the person does and the type of line that appears," said study co-author Patrick Little, in an interview with Science Daily.  "They think, 'I should ignore this thing because it's getting in my way', but they can't.  That's the key.  It seems like our minds can't help but represent the surface that the mime is interacting with -- even when we don't want to."
It also reminds me a bit of the McGurk effect, a rather baffling interference between sound and sight that occurs when we hear a person say one syllable ("ba," for example) and watch their mouths move as if they were saying a different one (such as "va").  You'd think that since we're talking about making sense of an auditory input, the brain would rely much more on what's coming in through the ears than what's coming in through the eyes, but that's not what happens; if you see someone's lips moving as if they're saying "va" but you hear them say "ba," what you think you're hearing is "va."  It's absolutely convincing, and works even if you know what's going on.
So yet another example of how easy it is to befuddle our brains with contradictory input.  It also explains why, in Berke Breathed's brilliant comic strip Bloom County, Opus the Penguin got arrested for assaulting a street mime, but the charge was eventually ruled by the judge to be "justifiable."
It's one thing to do street performances, but creating invisible surfaces in our brain just crosses a line, even though we probably won't be able to determine if the line is vertical or horizontal.
**************************************
This week's Skeptophilia book-of-the-week is a bit of a departure from the usual science fare: podcaster and author Rose Eveleth's amazing Flash Forward: An Illustrated Guide to the Possibly (and Not-So-Possible) Tomorrows.
Eveleth looks at what might happen if twelve things that are currently in the realm of science fiction became real -- a pill becoming available that obviates the need for sleep, for example, or the development of a robot that can make art.  She then extrapolates from those, to look at how they might change our world, to consider ramifications (good and bad) from our suddenly having access to science or technology we currently only dream about.
Eveleth's book is highly entertaining not only from its content, but because it's in graphic novel format -- a number of extremely talented artists, including Matt Lubchansky, Sophie Goldstein, Ben Passmore, and Julia Gförer, illustrate her twelve new worlds, literally drawing what we might be facing in the future.  Her conclusions, and their illustrations of them, are brilliant, funny, shocking, and most of all, memorable.
I love her visions even if I'm not sure I'd want to live in some of them.  The book certainly brings home the old adage of "Be careful what you wish for, you may get it."  But as long as they're in the realm of speculative fiction, they're great fun... especially in the hands of Eveleth and her wonderful illustrators.
[Note: if you purchase this book from the image/link below, part of the proceeds goes to support Skeptophilia!]