I have bad news for those of you who enjoy being creative: a new study has suggested that a key ingredient in crafting timeless masterpieces is unhappiness.

As a fiction writer, I've been fascinated for years with the question of where creativity comes from.  While some of the ideas that have inspired my writing come from readily identifiable sources, a lot of my stories had their genesis in the mysterious "it just popped into my head" phenomenon.  I've talked to a lot of writers about this, and many of them have had the experience of feeling as if their inspiration came, literally, from outside of their own minds.

And like many writers (and artists and musicians) I have had serious dry spells, when the inspiration simply didn't want to come.  I keep writing through those -- I've found that the best way to push through writer's block is to throw some discipline at it -- but I won't say that what I produce during those times has much of the spark I look for when I critique my own work.  The best writing comes during times when the ideas leap into my mind unannounced, from heaven-only-knows-where.

But take a look at this study, which indicates that what I may be missing in my life is a good dose of plain, old-fashioned misery.

Entitled "How Are You, My Dearest Mozart?  Well-being and Creativity of Three Famous Composers Based on their Letters," this paper in the Review of Economics and Statistics by economist and statistician Karol Jan Borowiecki of the University of Southern Denmark analyzes the letters and diaries of Wolfgang Amadeus Mozart, Ludwig van Beethoven, and Franz Liszt, and attempts to correlate the use of words indicating level of well-being with their productivity.

Not only their productivity in quantity, but in quality.  He looked at the timing of composition of works that "made a significant contribution to the classical canon," not just how many compositions they'd been able to churn out per month.  And the highest productivity, both in quality and quantity, came during the times these composers were most likely to use words like "sadness," "hurt," "grief," and "nervous."

"An increase in negative emotions by about 36.7 percent inspires one additional important composition the following year," Borowiecki writes.  "Since depression is strongly related to sadness, and is sometimes even defined as a state of chronic sadness, this result comes very close to previous claims made by psychologists that depression leads to increased creativity."

Factors that tended to decrease creative output were being in a happy marriage and finding a permanent position with its attendant job security. 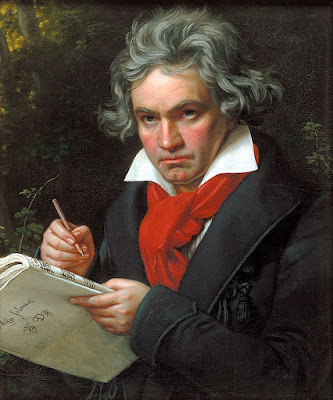 Don't tell him to cheer up -- maybe he's working on a masterpiece.  [Image is in the Public Domain]
As an aside, I recall hearing a while back on my favorite classical music radio station that there was an inquiry done into which of the famous composers had the most happy, well-balanced lives.  Some were clearly pretty awful -- Robert Schumann, who ended his life in an insane asylum, comes to mind -- but it was interesting that the winner of the happiest life contest was Franz Josef Haydn.
He of the 104 full-length symphonies.
So Borowiecki's result is certainly not the whole story.  On the other hand, it's made me wonder if the reason I've had the attention span of a hyperactive fruit fly recently every time I sit down to get some writing done on my current work-in-progress is because I'm enjoying the beautiful spring weather too much.  Should I tell my wife that I'm sick of her being nice to me and bringing me glasses of wine and giving me shoulder rubs, that it'd be better for my muse if she gave me the silent treatment, or just smacked me in the head every so often?  Maybe even the companionship of my ever-cheerful dog is dampening my creativity.  Maybe I should get a pet that is perfectly content viewing me with sneering disdain, or even ignoring my existence completely.

As interesting as this study is, I'm not sure that's the approach, frankly.  All of us creative types see ebbs and flows of our output, and the fact that I've had some unproductive moments in the last few months shouldn't concern me.  Nor, I think, should it make me seek out ways to be more miserable.  It might be that the dark side of human existence can generate beautiful works of art, writing, or music -- listen to the second movement of Beethoven's Pathetique Sonata for a wonderful example of heart-wringing pathos -- but without joy as an inspiration, we'd never have had the "Bergamasca" from Ottorino Respighi's Ancient Airs and Dances, my vote for one of the most purely exuberant moments in all of classical music.

So it's a mixed bag, as you might expect.  The most creative minds weave the entirety of human experience into their works, and draw on all aspects of emotion to color what they create.  We may be no closer to understanding where creativity itself comes from, but if we can take our pain and sometimes distill it into something beautiful, at least it gives us something to carry us forward when we're at our lowest points.
************************************
This week's Skeptophilia book recommendation is pure fun: Arik Kershenbaum's The Zoologist's Guide to the Galaxy: What Animals on Earth Reveal About Aliens and Ourselves.  Kershenbaum tackles a question that has fascinated me for quite some time; is evolution constrained?  By which I mean, are the patterns you see in most animals on Earth -- aerobic cellular respiration, bilateral symmetry, a central information processing system/brain, sensory organs sensitive to light, sound, and chemicals, and sexual reproduction -- such strong evolutionary drivers that they are likely to be found in alien organisms?
Kershenbaum, who is a zoologist at the University of Cambridge, looks at how our environment (and the changes thereof over geological history) shaped our physiology, and which of those features would likely appear in species on different alien worlds.  In this fantastically entertaining book, he considers what we know about animals on Earth -- including some extremely odd ones -- and uses that to speculate about what we might find when we finally do make contact (or, at the very least, detect signs of life on an exoplanet using our earthbound telescopes).
It's a wonderfully fun read, and if you're fascinated with the idea that we might not be alone in the universe but still think of aliens as the Star Trek-style humans with body paint, rubber noses, and funny accents, this book is for you.  You'll never look at the night sky the same way again.
[Note: if you purchase this book from the image/link below, part of the proceeds goes to support Skeptophilia!]