A few days ago I was casting about for topics for Skeptophilia, and was perusing that amazing clearinghouse for everything from the profound to the ridiculous, Reddit.

I ran into a link to a Science Daily article about some delightful research that came out of a collaboration between physicists at four different universities in China, which centered on the physics of skipping rocks.  I absolutely love skipping rocks, and whenever I'm by a lake I will spend inordinate amounts of time finding, and then slinging, the most perfectly flat stones I can find, trying to beat my record (which stands at thirteen skips). 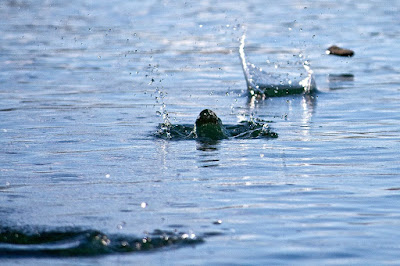 The math in the original research is way way beyond my ability to understand, despite my bachelor's degree in physics (but to be fair, I kind of sucked as a physics student).  The reader is put on notice that it's going to be rough going immediately, because the first thing the authors do is to define no fewer than 49 different variables they considered in modeling the behavior of a skipping stone.

So I went back to the summary in Science Daily, and found a nicely dumbed-down explanation of what they'd done.  They used an aluminum disk launched by an air compressor in place of the typical round stone and person's arm, with a motorized feature that started the disk spinning at a chosen rate before launch.  Attached to the disk was a set of sensors that monitored the disk while in flight, because -- as you know if you're a rock-skipper -- it can all happen so fast that it's hard to keep track of all-important data like how much the rock's path curves (and which direction), the angle your rock hits the water, and the number of skips you get.

The upshot of it was that the rate of spin is critical, because spinning induces the gyroscopic effect and stabilizes the pitch of the rock as it flies.  Less intuitively obvious, to me at least, is that the vertical acceleration of the rock has to be higher than a certain threshold (which turns out to be about four times the acceleration due to gravity) in order for the stone to bounce.

So I thought all this was pretty cool -- taking a familiar phenomenon and explaining how complex it really is using mathematical modeling.

Then I did what you should never, ever, ever do.

I looked at the comments section.

I swear, I should get fitted out with something like those "Invisible Fence" dog collars, only instead of zapping me when I cross a line on our property, it would zap me when I try to look at the comments section.  Any comments section.  Because I started sputtering with rage almost immediately, when I saw comments like these -- which, for the record, are reproduced here verbatim, because I don't want to write sic over and over:

More sensitive readers may want to plug their ears.

WILL ALL OF YOU ANTI-SCIENTIFIC, ILLITERATE YAHOOS KNUCKLE-DRAG YOUR WAY BACK TO YOUR CAVES, AND LEAVE THE INTELLECTUAL COMMENTARY TO PEOPLE WHO HAVE AN ACTUAL INTELLECT?

First of all, zero American tax dollars were spent on this study, because the entire thing was done in China.  I know we Americans have a regrettable tendency to think "America" = "the entire world," but all you have to do is look at the author affiliation list, or even the line in the Science Daily summary that says the research was done by "scientists from several universities in China."  And while the research itself studied stone-skipping, the model has applications to a lot of important stuff, which you'd have figured out if you bothered to look at the very first line of the original paper: "Although skipping stones seems like a time-honored pastime, an in-depth study of this game is of vital importance for the understanding of the water landing of space flight re-entry vehicles and aircraft, hull slamming, antitorpedo and antisubmarine water entry, etc."

And even if the researchers hadn't pointed out in the introduction to the paper exactly what the potential applications are, I absolutely abhor the attitude that pure research -- investigating a scientific question without regard to immediate utility -- is useless.  It's worth pointing out how many times what seemed like "nothing more than pure research" generated something that turned out to be incredibly important.  Here are a few examples that come to mind:

See why I get a little impatient?
But I think what gets me most about this whole thing, and comments sections in general, is how people who are obviously ignorant on a subject still feel like their opinions have relevance.  I have a lot of faults, but at least I try not to pontificate on topics I know nothing about.
It once again reminds me of the wonderful quote by Isaac Asimov: "Anti-intellectualism has been a constant thread winding its way through our political and cultural life, nurtured by the false notion that democracy means that 'my ignorance is just as good as your knowledge.'"
So, that's my maddening excursion of the day.  To the scientists who did the skipping-stone study, I'll say, "Bravo."  To the people who responded to it with sneers and snarls, I'll say, "Until you learn some science, shut the fuck up."  And to the Invisible Fence people, I'll reiterate my request for a Comments-Section Collar.  I bet you could make some serious cash selling those.
************************************
This week's Skeptophilia book recommendation is pure fun: Arik Kershenbaum's The Zoologist's Guide to the Galaxy: What Animals on Earth Reveal About Aliens and Ourselves.  Kershenbaum tackles a question that has fascinated me for quite some time; is evolution constrained?  By which I mean, are the patterns you see in most animals on Earth -- aerobic cellular respiration, bilateral symmetry, a central information processing system/brain, sensory organs sensitive to light, sound, and chemicals, and sexual reproduction -- such strong evolutionary drivers that they are likely to be found in alien organisms?
Kershenbaum, who is a zoologist at the University of Cambridge, looks at how our environment (and the changes thereof over geological history) shaped our physiology, and which of those features would likely appear in species on different alien worlds.  In this fantastically entertaining book, he considers what we know about animals on Earth -- including some extremely odd ones -- and uses that to speculate about what we might find when we finally do make contact (or, at the very least, detect signs of life on an exoplanet using our earthbound telescopes).
It's a wonderfully fun read, and if you're fascinated with the idea that we might not be alone in the universe but still think of aliens as the Star Trek-style humans with body paint, rubber noses, and funny accents, this book is for you.  You'll never look at the night sky the same way again.
[Note: if you purchase this book from the image/link below, part of the proceeds goes to support Skeptophilia!]