The child on the road

One of the creepiest urban legends is the tale of the Black-eyed Children.

The whole thing seems to have begun with a Texas man named Brian Bethel, who reported back in 1996 that he had an encounter with what appeared to be a ten-year-old child on the side of a highway near Abilene.  When he stopped to see if the child was okay, or needed a ride or something, the kid came up to Bethel's open window and said, "Please, can you help me?  I'm lost."

But when Bethel looked closer, he saw that the child's eyes were entirely black.  No white, no iris, just solid, glossy black.  Understandably, he gunned the engine and took off. 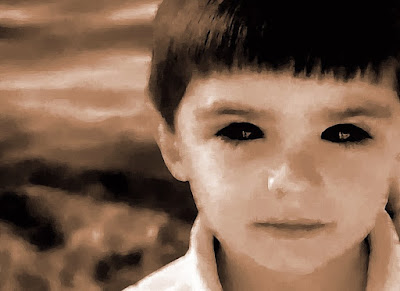 Since then, the legend has grown by accretion, with other people pitching in with their own stories of the Black-eyed Children.  The claim is that if you let one into your car or house, you'll never be seen again, although it's hard to understand how they'd know that, given that the only ones who could verify this are the ones who did let them in.

And they were never seen again.  Right?  Or am I missing some part in the logical chain, here?

The plausibility issues notwithstanding, the idea was creepy enough that I made it the basis of my trilogy of novels called The Boundary Solution -- Lines of Sight, Whistling in the Dark, and Fear No Colors.  I hope I did it justice, because whatever else you can say about it, the concept is scary as hell.

The topic comes up because of a report out of Australia, where something really peculiar is alleged to have happened last weekend.  According to a man named Mitch Kuhne, he was driving on the Hume Highway south of Sydney when he saw what looked like a child on the road.  Here's what Kuhne said:

In the video you’ll see what we seen on our way home from racing what looked to be a child on the middle of the highway!

Instantly called 000 as we couldn’t stop as we had a huge toy hauler we were carrying and would have caused an accident, police said they were putting patrols out immediately, I called the local station after realising the dash cam would have footage and called to see where I could send it to help them so they know what it is we saw and could pinpoint the location.  I was told on the phone by the officer that there is no need to send it as the child had been collected safely and was on its way home, I felt absolutely sick when all this happened I instantly felt so much better when I was told the kid had been collected.

If you want to see the dashcam footage, you can check it out at News.com.au, at the link I posted above.  But here's a still: 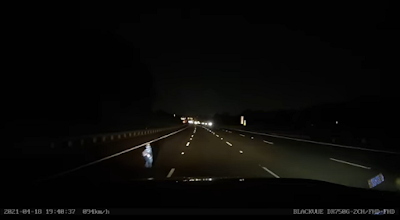 There's no doubt that the video is creepy.  The figure moves as the car passes it, and you can see its shadow rotating beneath its feet, indicating it's a solid object (i.e. not a lens flare or some camera glitch).  But this isn't as creepy as the postscript -- because the Australian media covering the story contacted the police, and they denied the entire thing.

They'd searched the area after Kuhne's call, they said, and found nothing.  Furthermore, there'd been no reports of a missing person in the area.

If it weren't for the discrepancy, the story wouldn't be that odd; just a kid wandering where (s)he shouldn't, and getting rescued by the police.  But the police at the Macquarie Fields Police Station are now saying there was no child found, and furthermore, that Kuhne was told that after the search was complete.

"The only reason I posted the video [of the dashcam footage on social media] is because I thought the kid was safe and felt okay posting it," Kuhne said.  "Now to see that they are claiming I was never told this makes me sick."

So it's a weird story, I'll give it that.  There may not be anything to it; it could be that Kuhne made up the part about the police having confirmed they'd found a child.  (I don't mean to impugn the honesty of someone I don't know, but we have to admit that as a possibility.)  If it's the police who are lying, the next obvious question is, "Why?"  What would they have to gain by telling Kuhne the child was safe if they hadn't found any child -- or, conversely, denying the existence of the child to the media if they had found one and gotten him/her home safely?  Either way, there's something about this whole situation that doesn't add up.
Take a look at the video, and let me know what you think in the comments.  Skeptics are saying it isn't a child at all, but a bit of rubbish being blown on the wind, an animal, or a statue (although what a statue was doing in the middle of the road is a question in and of itself).  Other, less skeptical types are saying it was a ghost or an alien.
Or, possibly, a Black-eyed Child.  Gotta watch out for those.  And if that's what it was, it's a good thing Kuhne didn't stop.  Maybe that's what happened to the police -- the ones who picked up the child were never seen again.
I hear that happens sometimes.
****************************************
When people think of mass extinctions, the one that usually comes to mind first is the Cretaceous-Tertiary Extinction of 66 million years ago, the one that wiped out all the non-avian dinosaurs and a good many species of other types.  It certainly was massive -- current estimates are that it killed between fifty and sixty percent of the species alive at the time -- but it was far from the biggest.
The largest mass extinction ever took place 251 million years ago, and it destroyed over ninety percent of life on Earth, taking out whole taxa and changing the direction of evolution permanently.  But what could cause a disaster on this scale?
In When Life Nearly Died: The Greatest Mass Extinction of All Time, University of Bristol paleontologist Michael Benton describes an event so catastrophic that it beggars the imagination.  Following researchers to outcrops of rock from the time of the extinction, he looks at what was lost -- trilobites, horn corals, sea scorpions, and blastoids (a starfish relative) vanished completely, but no group was without losses.  Even terrestrial vertebrates, who made it through the bottleneck and proceeded to kind of take over, had losses on the order of seventy percent.
He goes through the possible causes for the extinction, along with the evidence for each, along the way painting a terrifying picture of a world that very nearly became uninhabited.  It's a grim but fascinating story, and Benton's expertise and clarity of writing makes it a brilliant read.
[Note: if you purchase this book using the image/link below, part of the proceeds goes to support Skeptophilia!]