The power of relentless positivity

I have a friend whom I frequently take out for walks.  I'll call him Jim.  Jim doesn't have it easy; he's of normal intelligence but has a lot of serious developmental disabilities, and things that most of us don't even give much thought to -- brushing teeth, shaving, showering, changing clothes -- are time-consuming and arduous chores for him.  His only living relative is a five-hour drive away, so he is completely reliant on non-family members for his care.

Despite this, Jim is the single most positive person I've ever met.  Whoever coined the term "sunny disposition" must have known him.  Whenever we get together, he always tells me how much he appreciates my help and companionship.  At the end, he thanks me again, and says, "I had a lot of fun.  It was a good outing.  Thank you so much."

He also cares deeply about the people around him.  He always asks me how I'm doing, and unlike with some people -- for whom "how are you?" is a perfunctory and rather meaningless greeting -- Jim honestly seems delighted when I tell him what's going on in my life.

He's like that about almost everything.  One Friday I told him I wouldn't see him till Monday, but I hoped he had a good weekend.

Yesterday we went for a walk in Cass Park, a big, sprawling piece of parkland along the west shore of Cayuga Lake.  We'd only been out for a few minutes when Jim said, "It sure is a beautiful day.  Isn't it a beautiful day?"

For the record, at the time he said this it was about thirty degrees Fahrenheit, spitting snow, and there was a stiff breeze off the lake.  Here's a photo I took of Jim's beautiful day: 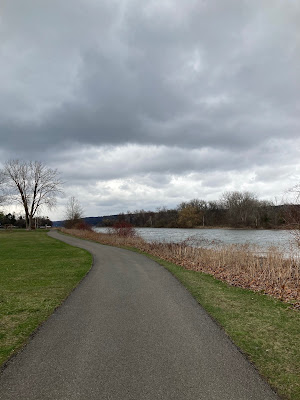 Okay, the Finger Lakes region of New York, where we both live, is pretty gorgeous even in midwinter, but I was immediately struck by the fact that no one I've ever met -- other than Jim -- would have characterized the day as "beautiful."  We were both well-wrapped with coats, scarves, and gloves, so we were comfortable enough, but it was still gray, chilly, and windy.

But for Jim, it really was a beautiful day.  For him, a beautiful day is a long walk with a friend out in the fresh air in a place he loves.  He's not impervious to discomfort; when we got back to the car, I turned the heater up, and he said, "That feels nice.  My hands are cold."  But what stands out to me is that Jim chooses to accept the discomfort because he appreciates what he has so deeply.

As we walked, it came to me that there was a descriptor for Jim: he's relentlessly positive.  There's nothing forced about it.  It's completely genuine.  He doesn't do it to be polite, or because it'll get me to come back and walk with him another day, or to make me feel good.

He's relentlessly positive because he chooses to focus on the beautiful things in his world rather than the (many) difficulties.

I wonder what it'd be like if more of us were like Jim.  Recognizing the problems we face and doing what we can about them, but first and foremost appreciating what we have.  As a lifelong sufferer of depression and anxiety, I know that telling a person "just be happy" is the opposite of helpful; and that's not what I'm saying.

What I'm saying is make the choice to look at the positive things first, and be grateful for them.  Make a practice of aiming for relentless positivity.

Jenny Lawson puts it differently in her amazing book Furiously Happy: A Funny Book About Horrible Things, which should be on everyone's reading list.  Lawson has struggled with serious, debilitating mental illness her whole life, and this memoir (and her first book, Let's Pretend This Never Happened) are the only books I can think of that made me ugly cry and howl with laughter, sometimes on the same page.

I’ve often thought that people with severe depression have developed such a well for experiencing extreme emotion that they might be able to experience extreme joy in a way that “normal” people also might never understand, and that’s what Furiously Happy is all about.  It’s about taking those moments when things are fine and making them amazing, because those moments are what make us who we are, and they’re the same moments we take into battle with us when our brains declare war on our very existence. It’s the difference between “surviving life” and “living it”... To all who walk the dark path, and to those who walk in the sunshine but hold out a hand in the darkness to those who travel beside them: Brighter days are coming.  Clearer sight will arrive.  And you will arrive too.  No, it might not be forever.  The bright moments might be for a few days at a time, but hold on for those days.  Those days are worth the dark.

It's like my walk yesterday with Jim.  There were probably people walking that same path in Cass Park yesterday who spent the entire time focusing on how miserable the cold is, how gray it all was, how a cold snap on the first day of April was a bummer.  Jim chose to look instead at the stark beauty of the lake under the gray clouds, the way the wind was making the fallen leaves tumble and rattle under our feet, how pretty the snowflakes looked swirling past our faces.
All of us were cold, out there in the park.  But some of us were cold and miserable; Jim was cold and relentlessly positive.  And I'm guessing that despite the continuous difficulties he lives with, he's the only one who got home and grinned and said, "Nice to be in a warm house again... but wasn't that fun?"
I'll end with one more quote from Jenny Lawson, that captures what I'm trying to say better than I ever could: "I see that there is dust in the air that will eventually settle onto the floor to be swept out the door as a nuisance, but before that, for one brilliant moment I see the dust motes catch sunlight and sparkle and dance like stardust.  I see the beginning and the end of all things.  I see my life.  It is beautifully ugly and tarnished in just the right way.  It sparkles with debris.  There is wonder and joy in the simplest of things."
*********************************
The sad truth of our history is that science and scientific research has until very recently been considered the exclusive province of men.  The exclusion of women committed the double injury of preventing curious, talented, brilliant women from pursuing their deepest interests, and robbing society of half of the gains of knowledge we might otherwise have seen.
To be sure, a small number of women made it past the obstacles men set in their way, and braved the scorn generated by their infiltration into what was then a masculine world.  A rare few -- Marie Curie, Barbara McClintock, Mary Anning, and Jocelyn Bell Burnell come to mind -- actually succeeded so well that they became widely known even outside of their fields.  But hundreds of others remained in obscurity, or were so discouraged by the difficulties that they gave up entirely.
It's both heartening and profoundly infuriating to read about the women scientists who worked against the bigoted, white-male-only mentality; heartening because it's always cheering to see someone achieve well-deserved success, and infuriating because the reason their accomplishments stand out is because of impediments put in their way by pure chauvinistic bigotry.  So if you want to experience both of these, and read a story of a group of women who in the early twentieth century revolutionized the field of astronomy despite having to fight for every opportunity they got, read Dava Sobel's amazing book The Glass Universe: How the Ladies of the Harvard Observatory Took the Measure of the Stars.
In it, we get to know such brilliant scientists as Willamina Fleming -- a Scottish woman originally hired as a maid, but who after watching the male astronomers at work commented that she could do what they did better and faster, and so... she did.  Cecilia Payne, the first ever female professor of astronomy at Harvard University.  Annie Jump Cannon, who not only had her gender as an unfair obstacle to her dreams, but had to overcome the difficulties of being profoundly deaf.
Their success story is a tribute to their perseverance, brainpower, and -- most importantly -- their loving support of each other in fighting a monolithic male edifice that back then was even more firmly entrenched than it is now.  Their names should be more widely known, as should their stories.  In Sobel's able hands, their characters leap off the page -- and tell you a tale you'll never forget.
[Note: if you purchase this book using the image/link below, part of the proceeds goes to support Skeptophilia!]