Have you heard of Tennessee's House Bill 0800?

It just passed the Education Subcommittee two days ago, and stands a good chance of passing the remaining steps as well.  What Governor Bill Lee will do with it if it gets to his desk is unknown, but given his support for denying LGBTQ couples the right to adopt children, I'd say the chances of his signing it into law are pretty good.

To say this makes me livid is an understatement of sizable proportions.  I can't even read words like "normalize" in the context of LGBTQ people without seeing red.  And for fuck's sake, "lifestyles?"

Being queer is who you are. 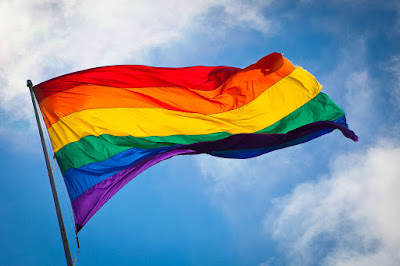 The insidious nature of this bill is horrifying.  It's implying that somehow, you become LGBTQ because you read a book about it, as if some sixteen-year-old straight guy picked up a copy of Rainbow Boys and suddenly his sex drive took a 180-degree about face, or that gay teens wouldn't be gay if they never heard the word.

To believe this, you honestly have to be an idiot, and also never talk to an actual LGBTQ person.  I grew up in a culture that didn't so much demonize queerness as much as ignoring it into oblivion.  I knew I was attracted to both males and females when I was in high school, but I didn't even know the word "bisexual" existed until I was about twenty.  By then, the sense of secrecy and shame surrounding the whole thing stopped me from admitting, even to myself, who I was, and I ended up closeted.

The psychological damage this does is devastating.  Queer kids in Tennessee will now be blocked from having access to information that might help them understand and accept themselves, to be open about their identities, to be confident enough to speak out against the homophobia that is still all too common.  The only possible justification for this, besides outright prejudice, is the biblical prohibition against male/male sex (in the entire Bible there is not a single mention of female/female sex).

But let me make something clear, Tennessee politicians, and I'll speak slowly, because some of you seem to be lacking in the IQ department:

The laws of the United States are based upon the Constitution, not the Bible.

With bullshit like this, is it any wonder that the suicide rate amongst queer teens is through the roof?  Suicide is the second leading cause of death of people between the ages of ten and twenty-four, and LGBTQ youth are five times more likely to attempt suicide than heterosexuals are.  Forty percent of transgender adults report having made a suicide attempt.

If this bill passes into law, the blood of every queer teenager who commits suicide in Tennessee from then on will be on the hands of the legislators who voted for it.

It appalls me that in 2021 we are still fighting the same fucking battles that we've fought for as long as I can remember.  To convince people that we were born this way, that it's not a choice or a sin or a "lifestyle."  To prove that we can be loving, caring, faithful partners and parents.  To make it illegal to discriminate against anyone on the basis of sexual orientation.

I do have some hope that there might be a sea change coming, however.  I recently listened to an episode of the NPR show Hidden Brain, originally aired in April 2019, which looked at the fact that attitudes toward queer people have changed at a rate that is completely unprecedented.  Previous anti-LGBTQ bills in Georgia and South Carolina resulted in the pullout of businesses, investors, and sports teams, costing the states millions of dollars in lost revenue, a move that never would have happened even twenty years ago.

But this kind of mindless, ugly bigotry is not gone, not yet.  Tennessee is hardly the only place it still exists.  We queer people, and LGBTQ allies, can not afford to stop speaking out.

The stakes are way, way too high.

**************************************
This week's Skeptophilia book-of-the-week is a bit of a departure from the usual science fare: podcaster and author Rose Eveleth's amazing Flash Forward: An Illustrated Guide to the Possibly (and Not-So-Possible) Tomorrows.
Eveleth looks at what might happen if twelve things that are currently in the realm of science fiction became real -- a pill becoming available that obviates the need for sleep, for example, or the development of a robot that can make art.  She then extrapolates from those, to look at how they might change our world, to consider ramifications (good and bad) from our suddenly having access to science or technology we currently only dream about.
Eveleth's book is highly entertaining not only from its content, but because it's in graphic novel format -- a number of extremely talented artists, including Matt Lubchansky, Sophie Goldstein, Ben Passmore, and Julia Gförer, illustrate her twelve new worlds, literally drawing what we might be facing in the future.  Her conclusions, and their illustrations of them, are brilliant, funny, shocking, and most of all, memorable.
I love her visions even if I'm not sure I'd want to live in some of them.  The book certainly brings home the old adage of "Be careful what you wish for, you may get it."  But as long as they're in the realm of speculative fiction, they're great fun... especially in the hands of Eveleth and her wonderful illustrators.
[Note: if you purchase this book from the image/link below, part of the proceeds goes to support Skeptophilia!]