Coming hard on the heels of an encouraging paper about the possibilities of near-light-speed travel, at which we might potentially have probe data from the nearest star to the Sun in ten years or so, we have an even more encouraging study of a place right here in the Solar System that might be worth looking at as a home of extraterrestrial life.

The place is Enceladus, the sixth largest moon of the planet Saturn.  It's a pretty decent-sized object, about one-seventh the diameter of the Earth.  Flyby data from the spacecraft Cassini in 2014 showed that it's a curious place, with a liquid water ocean capped by a shell of solid ice.  There are geysers coming up through cracks in the surface, and Cassini was able to sample the spray and confirm that it is, indeed, water. 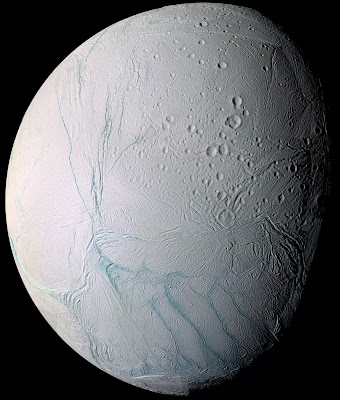 But it's kind of a topsy-turvy world even so.  Here on the Earth, oceans are warmest at the top and coolest at the bottom; the deep parts of the ocean are the most stable ecosystems on Earth, always completely dark, under crushing pressure, and about four degrees Celsius (the temperature at which water is densest).  On Enceladus, it's the other way around; coldest on top, where it's in contact with the undersurface of the ice cap, and warmest at the bottom, where it's in contact with the core of the moon.  There's no land surface; the oceans on Enceladus are estimated at thirty kilometers deep (contrast that to an average three kilometers for Earth's oceans).

The upside-down temperature structure on Enceladus is what makes it an excellent place to look for extraterrestrial life, but to see why, we'll need to take a brief digression for a physics lesson.

One of the main drivers of ocean currents -- the movement of water not only horizontally, but vertically -- is convection, which is fluid flow because of differences in density.  One of the best-studied examples, which I described more fully in a post a few weeks ago, is the Atlantic Conveyor (known to scientists as the Atlantic Meridional Overturning Circulation), in which evaporation from the warm Gulf Stream as it flows north cools the water and makes it more saline, both of which have the effect of increasing its density.  Eventually, the blob of water becomes cool and saline enough that it exceeds the density of the water surrounding it, and it sinks.  This usually occurs in the North Atlantic southwest of Iceland, and that draw-down is what pulls more warm water north, keeping the whole system moving.

This has multiple effects, two of which concern us here.  The first is that it acts as a heat transfer mechanism, warming the air (and the land near it) and giving the American Northeast, the Maritimes of Canada, Iceland, and northwestern Europe the temperate climate they have, which otherwise would be a lot more like Siberia.  Second, the water carries with it nutrients of various sorts, and redistribution of those nutrients forms the basis of phytoplankton growth and the food chain.  (The most obvious example of this latter effect is the El Niño Southern Oscillation, in which upwelling of nutrient-laden water off the coast of Peru supports a huge population of fish -- until an El Niño year, when warm water flowing east blocks the upwelling, and the entire food chain collapses.  The four-year lots-of-fish to no-fish cycle was observed as far back at the seventeenth century, when the Spanish rulers of Peru noted that the collapse often started in midwinter, and gave it the name El Niño, which refers to the baby Jesus.)

So as long as you have alterations in density, a fluid will move.  It's what drives all weather, in fact; ground heating raises the temperature of air, lowering its density and making it rise, generating a low-pressure system that draws in more air to replace what's moving aloft.  This causes wind, and if the air has moisture, it'll condense out as it rises and cools, causing rain and/or snow.

Of course, the water drawn down by the sinking of the Gulf Stream near Iceland (or the air moving upward because of warming) is only half the picture.  It's got to come back somehow, and both the atmosphere and ocean are filled with convection cells, swirling, more-or-less circular currents following the motion both vertically and horizontally.  And once again -- to return to why the topic comes up -- these redistribute not only heat, but (in the case of water), nutrients.

On Enceladus, the pattern is upside down as compared to Earth's oceans.  Water in contact with the underside of the ice shell cools and eventually sinks, drawing warmer water up from near the center of the moon.  This mixing stirs the pot, and any potential nutrient chemicals don't just settle out on the bottom.  Thus, Enceladus is a prime candidate for extraterrestrial life of some sort.

To be sure, it'd be different from what we have here on Earth.  A lot different.  Despite the cracks and geysers, the ice shell on Enceladus is thick and pretty much solid, so any living things under there would never come into contract with direct rays of the Sun (as dim as they'd be out there).  The only energy source would be the warmth of the core, so there'd be no photosynthesis, only chemosynthesis, perhaps similar to the weird organisms near Earth's hydrothermal vents in the deep oceans.

Even so, it's a prime spot to look for signs of life.  And unlike Proxima Centauri, the nearest star, which in a best-case scenario would require ten years for an outward-bound near-light-speed probe and returned signal back on Earth, the same round-trip to Enceladus would take on the order of three hours.

Once again highlighting that the universe is freakin' huge.

If we can develop near-light-speed travel, maybe the first thing to do is to send some probes to explore our own Solar System more thoroughly.  Not only Enceladus, but a similar water-world moon of Jupiter, Europa, which is even closer.  I'd say the likelihood of finding intelligent life on either one is slim to none, so I wouldn't be looking for anything like the super-tech civilization on a planet orbiting Vega in the movie Contact, but I think there's an excellent chance that there's something living down there, even if it turns out to be only as complex as bacteria.

But even so.  How cool would that be?  A life form completely unrelated to anything we have down here.  And if we did find life on Europa or Enceladus, it would really bolster the hunch I've had for years, which is that life is common in the universe.

And I, for one, would settle for that in a heartbeat.

*********************************
The sad truth of our history is that science and scientific research has until very recently been considered the exclusive province of men.  The exclusion of women committed the double injury of preventing curious, talented, brilliant women from pursuing their deepest interests, and robbing society of half of the gains of knowledge we might otherwise have seen.
To be sure, a small number of women made it past the obstacles men set in their way, and braved the scorn generated by their infiltration into what was then a masculine world.  A rare few -- Marie Curie, Barbara McClintock, Mary Anning, and Jocelyn Bell Burnell come to mind -- actually succeeded so well that they became widely known even outside of their fields.  But hundreds of others remained in obscurity, or were so discouraged by the difficulties that they gave up entirely.
It's both heartening and profoundly infuriating to read about the women scientists who worked against the bigoted, white-male-only mentality; heartening because it's always cheering to see someone achieve well-deserved success, and infuriating because the reason their accomplishments stand out is because of impediments put in their way by pure chauvinistic bigotry.  So if you want to experience both of these, and read a story of a group of women who in the early twentieth century revolutionized the field of astronomy despite having to fight for every opportunity they got, read Dava Sobel's amazing book The Glass Universe: How the Ladies of the Harvard Observatory Took the Measure of the Stars.
In it, we get to know such brilliant scientists as Willamina Fleming -- a Scottish woman originally hired as a maid, but who after watching the male astronomers at work commented that she could do what they did better and faster, and so... she did.  Cecilia Payne, the first ever female professor of astronomy at Harvard University.  Annie Jump Cannon, who not only had her gender as an unfair obstacle to her dreams, but had to overcome the difficulties of being profoundly deaf.
Their success story is a tribute to their perseverance, brainpower, and -- most importantly -- their loving support of each other in fighting a monolithic male edifice that back then was even more firmly entrenched than it is now.  Their names should be more widely known, as should their stories.  In Sobel's able hands, their characters leap off the page -- and tell you a tale you'll never forget.
[Note: if you purchase this book using the image/link below, part of the proceeds goes to support Skeptophilia!]