Sometimes I bump into a piece of research that's just so cool I have to tell you about it.
Yesterday when I was casting about for a topic for today's post, I found a link to a paper in the Journal of Geophysical Research called "The Physics of Falling Raindrops in Diverse Planetary Atmospheres," by Kaitlyn Loftus and Robin Wordsworth, of Harvard University's Department of Earth and Planetary Sciences.  In it, they consider the models of how raindrops alter as they fall -- evaporating, changing shape because of atmospheric drag, interacting with nearby drops -- and how that might differ not only in different environments on Earth, but on other planets.
You may already know that raindrops aren't as they're usually pictured, with a teardrop shape that's bulbous on the bottom and tapers to a point at the top; they're more or less spherical.  Large raindrops, or drops in high winds, will sometimes be deformed into fat ellipses, but modeling raindrop shapes as spheres is going to be a pretty good approximation most of the time.  Where things get interesting, though, is the fact that they sometimes coalesce with other drops, or partially evaporate as they fall.  In fact, it's the evaporation of rain on the way down, especially when falling into warm, dry air, that gives rise to my all-time favorite atmospheric phenomenon: a convective microburst.
Microbursts don't occur where I live, here in central New York, which I'm disappointed about because it'd be cool to experience one, and relieved about because having your stuff blown into the next time zone is kind of inconvenient.  They're much more common in areas that have turbulent updrafts from a layer of warm air near the surface -- like the American Midwest.  (It's no coincidence that places with microbursts are usually also prone to tornados.)
What happens is something like this.  A moisture-laden cloud reaches the point where the droplets of water are heavy enough to fall, so they do, dropping into the layer of warm, dry air underneath.  This makes the drops begin to evaporate.  Evaporation cools the air layer, and if the gradient -- the temperature difference between the blob of rain-cooled air and the hot, dry air below it -- gets big enough, the cool air literally falls out of the sky like an Acme anvil in a Roadrunner and Coyote cartoon.
If you're underneath this, all you know is that it's lightly raining, and then all of a sudden, WHAM.  The winds go from zero to a hundred kilometers per hour in thirty seconds flat.  Then equally quickly, it's all over, leaving you to pick yourself up and wander around trying to figure out where your trash cans and patio furniture went. 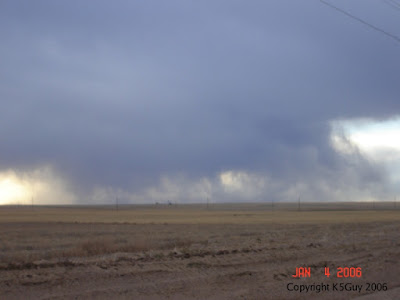 A microburst near Denver, Colorado in 2006. There aren't many good photographs of them because they're over so quickly, and also because if you're in one, the last thing you'll be thinking about is taking pictures. [Image licensed under the Creative Commons Unixluv, Denver-microburst, CC BY 3.0]
Anyhow, raindrops are way more interesting than a lot of people realize, as is weather in general.  If I hadn't become a science teacher I think I'd have been a tornado chaser.  As things stand, I have to content myself with frequently updating my wife about such critical information as the status of frontal systems in North Dakota, usually eliciting a comment of, "Yes, dear," which I choose to interpret as a sign of breathless fascination.
But back to the study.  What Loftus and Wordsworth did was to model raindrop behavior, and then extrapolate that model to other, less familiar environments -- like the thunderstorms on Titan, which are made of droplets of ammonia.  The authors write:

The behavior of clouds and precipitation on planets beyond Earth is poorly understood, but understanding clouds and precipitation is important for predicting planetary climates and interpreting records of past rainfall preserved on the surfaces of Earth, Mars, and Titan.  One component of the clouds and precipitation system that can be easily understood is the behavior of individual raindrops.  Here, we show how to calculate three key properties that characterize raindrops: their shape, their falling speed, and the speed at which they evaporate.  From these properties, we demonstrate that, across a wide range of planetary conditions, only raindrops in a relatively narrow size range can reach the surface from clouds.  We are able to abstract a very simple expression to explain the behavior of falling raindrops from more complicated equations, which should facilitate improved representations of rainfall in complex climate models in the future.

Which I think is amazingly cool.  The idea that we could use information about rainfall here on Earth to make some guesses about what weather is like on other planets is astonishing.  I'm sure if we ever get real data from extrasolar planets, or better data from places like Titan and Enceladus here in our own Solar System, we'll still be in for plenty of surprises; I'm reminded of the cyclic violent downpours of liquid methane on the planet where the Robinsons are stranded in the remake of Lost in Space (which, unlike the original series, is actually good).

But even having a start at understanding the weather on exoplanets, based upon speculation about the conditions and knowledge of how raindrops behave on Earth, is nothing short of fascinating.

So who knows.  Maybe soon I'll be able to update my wife about what the low-pressure systems are doing on Titan.  With luck, that will produce a better reaction than "Yes, dear."

**************************************
This week's Skeptophilia book-of-the-week is a bit of a departure from the usual science fare: podcaster and author Rose Eveleth's amazing Flash Forward: An Illustrated Guide to the Possibly (and Not-So-Possible) Tomorrows.
Eveleth looks at what might happen if twelve things that are currently in the realm of science fiction became real -- a pill becoming available that obviates the need for sleep, for example, or the development of a robot that can make art.  She then extrapolates from those, to look at how they might change our world, to consider ramifications (good and bad) from our suddenly having access to science or technology we currently only dream about.
Eveleth's book is highly entertaining not only from its content, but because it's in graphic novel format -- a number of extremely talented artists, including Matt Lubchansky, Sophie Goldstein, Ben Passmore, and Julia Gförer, illustrate her twelve new worlds, literally drawing what we might be facing in the future.  Her conclusions, and their illustrations of them, are brilliant, funny, shocking, and most of all, memorable.
I love her visions even if I'm not sure I'd want to live in some of them.  The book certainly brings home the old adage of "Be careful what you wish for, you may get it."  But as long as they're in the realm of speculative fiction, they're great fun... especially in the hands of Eveleth and her wonderful illustrators.
[Note: if you purchase this book from the image/link below, part of the proceeds goes to support Skeptophilia!]