Thanks to a friend and loyal reader of Skeptophilia, I found out yesterday that those of you who would like a nice place to retire can now buy property...

I'm not joking, although the people who set up the site may well be.  Here's the idea:

Own an acre of land in our Solar System’s 4th planet; package includes the deed, a map with location of your land, and a Mars info eBook.

Which sounds like it's completely aboveboard, given that it comes with an official deed and an informational booklet and all. 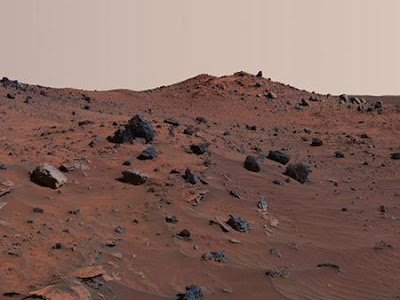 Home, sweet home.  [Image is in the Public Domain courtesy of NASA/JPL]
They go on to give us more details:

Buying land on Mars sounds like a plot line in some futuristic sci-fi flick about billionaires.  In truth, it's a modern-day possibility for thousandaires.  Buy Planet Mars gives astrophiles the chance to buy one acre of land on the Red Planet.  Much like the purchase of a star, Martian Land Packages include a map charting your acre's location, an owner's deed, a NASA report on Mars exploration, and a photo eBook.  These packages are issued digitally, meaning they're available for download immediately after purchase.

Yes, thousandaires, as long as they have more money than sense.  An acre of land on Mars costs $35, which sounds pretty cheap, until you realize that (1) you're never going to go there, and (2) even after you purchase it, you don't really own land on Mars, because (3) the person selling the property on Mars doesn't technically own what he's selling.

Which evidently is not apparent to the 210 people who have paid actual money for this unreal estate.  The seller's Groupon page has a lot of positive testimonials, such as the following:
Worthless!  Yay!  Isn't that fun?

Okay, I know I'm coming across as a sarcastic, grumpy, humorless, sour-tempered curmudgeon here.  Which is hardly fair, because I am not humorless.  As far as the others, well, okay, maybe.  For example, my wife contends that I've been a curmudgeon since infancy.  I can't quite dodge the "sarcastic" thing, either, given that it's in the tagline of this blog.
But in my own defense, I'm not immune to pointless stuff sometimes.  After all, I'm the guy who was fully in favor of everyone purchasing alien abduction insurance.  (After posting that one, an anonymous reader of Skeptophilia purchased alien abduction insurance for me, and made my dog the beneficiary.)

So maybe I should be encouraging people to buy property on Mars.  You never know, maybe one day we'll have manned missions to Mars, and you could go visit your homestead.  Although this didn't work out so well for Matt Damon in The Martian.  As I recall, it became uncomfortably breezy.  He ended up having to do some impromptu self-surgery with a staple gun.  And he learned that Mars is really not the place if your lifelong dream is growing potatoes.

Anyhow.  If you've got an extra $35 that you can't think of doing something more productive with, which in my opinion would include using it to start a campfire, you can buy an acre of land on Mars.  If you do, make sure to post here and let me know the details.  I'm especially curious about the deed, because you have to wonder under whose jurisdiction it's being issued.
****************************************
When people think of mass extinctions, the one that usually comes to mind first is the Cretaceous-Tertiary Extinction of 66 million years ago, the one that wiped out all the non-avian dinosaurs and a good many species of other types.  It certainly was massive -- current estimates are that it killed between fifty and sixty percent of the species alive at the time -- but it was far from the biggest.
The largest mass extinction ever took place 251 million years ago, and it destroyed over ninety percent of life on Earth, taking out whole taxa and changing the direction of evolution permanently.  But what could cause a disaster on this scale?
In When Life Nearly Died: The Greatest Mass Extinction of All Time, University of Bristol paleontologist Michael Benton describes an event so catastrophic that it beggars the imagination.  Following researchers to outcrops of rock from the time of the extinction, he looks at what was lost -- trilobites, horn corals, sea scorpions, and blastoids (a starfish relative) vanished completely, but no group was without losses.  Even terrestrial vertebrates, who made it through the bottleneck and proceeded to kind of take over, had losses on the order of seventy percent.
He goes through the possible causes for the extinction, along with the evidence for each, along the way painting a terrifying picture of a world that very nearly became uninhabited.  It's a grim but fascinating story, and Benton's expertise and clarity of writing makes it a brilliant read.
[Note: if you purchase this book using the image/link below, part of the proceeds goes to support Skeptophilia!]