A little life, rounded with a sleep

An unsolved mystery of biology is the question of why we -- and just about every other animal studied -- have to sleep.

I've looked at this issue before here at Skeptophilia, and from the research I've read, we're no closer to a definitive answer.  There's the physical rest aspect, of course, but I think we can all attest that when you're exhausted, you don't recover equally well by sitting quietly awake for two hours or by taking a two-hour nap.  (In fact, if you're like me, when you're exhausted, sitting quietly for two hours without falling asleep is damn near impossible.)  There's some indication that sleep, especially the REM (rapid eye movement) stage wherein we dream, is critical for memory consolidation.  Other studies have found that during sleep, potentially toxic metabolic byproducts are cleared from the brain and cerebrospinal fluid, so sleep may act as a time for cleaning house.

Or all three.  And probably others.  But even if these are partial answers to the conundrum of sleep, they leave a number of facets of the sleep cycle unaccounted for.  Why, for example, does sleep need vary so greatly?  Elephants in the wild sleep about two hours a day; lions, on the other end of the spectrum, snooze for eighteen to twenty hours a day.  Famously, dolphins and whales do something even stranger.  They let half of their brain sleep at a time -- one side becomes quiescent, then that side wakes up and the other one takes a nap. 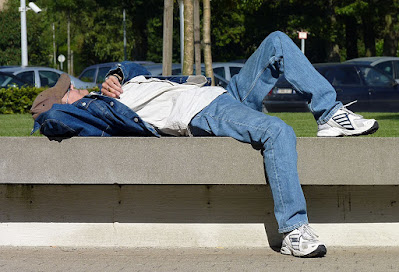 Recent studies have shown that however far you go down the animal-brainpower-scale, they still sleep.  Insects and other arthropods sleep.  Even roundworms do.  One difficulty is that at that stage, it's a little hard to define what sleep is; certainly, the mental activity isn't going to be closely analogous to what goes on in a human's brain during the sleep cycle.  So most biologists use a functional definition: sleep is occurring if (1) the animal becomes quiet and hard to rouse, (2) the behavior is on some kind of a circadian rhythm, and (3) if you disturb the animal's sleep one day, they make up for it by sleeping longer the next day (something called sleep homeostasis).  These are sufficient to differentiate it from other behaviors that might mimic some aspects of true sleep -- hibernation, coma, anesthetization, inebriation, fainting, and so on.

This generates a fascinating result when you look at some of the simplest animals in the world; because a recent paper in the journal Science Advances has demonstrated that by this definition, hydras sleep.

Hydras are a group of freshwater animals in the Phylum Cnidaria, and thus are related to jellyfish, sea anemones, and corals.  This generates a difficulty if you try to apply any brain-based evolutionary reason for the ubiquity of sleep, because hydras don't have a brain.  They have a decentralized nerve net with no central nervous system whatsoever.  And yet, they undergo behavior that meet all three of the criteria of the functional definition for sleep.

This not only raises some interesting questions about the purpose of sleep, it brings up an entirely different one for the evolutionary biologists.  When did sleep evolve?  There's a general rule that the more ubiquitous a feature is (be it an organ, a protein, a gene, a behavior, whatever), the older it is evolutionarily and the more important it is to survival.  By this argument, sleep is really critical (which we already sort of knew), and it's really old.  Hydras are almost as distant as you can get from mammals on the family tree of Kingdom Animalia; our last common ancestor with hydras lived at least five hundred million years ago.  Amongst animals, only sponges are more distantly related.  It is possible that sleep is not a conserved feature -- that it was evolved independently on more than one of the branches of the family tree -- but in my mind, given the fact that every animal studied shows sleep behavior, it seems like it requires a great many more ad hoc assumptions to claim that sleep evolved over and over than it does to assert that we all inherited it from a common ancestor a very long time ago.

Nota bene: you might be thinking that the same could be said for the presence of eyes, but eyes almost certainly evolved separately in different groups.  We can tell this because however functionally similar the eyes of (for example) humans, flies, flatworms, and squids are, they are structurally different.  It may be that they all come from a common ancestor with light-sensing patches of some sort, but if so, in the interim each branch of Kingdom Animalia refined those structures in entirely different ways.  The same, by the way, is true of wings and the presence of flight in a number of different animal groups.

So the discovery that hydras sleep makes a curious question even curiouser.  Clearly, if sleep aids higher brain functioning and memory consolidation in humans, those were advantages it gained us much later, because as I mentioned, hydras don't even have brains.  The presence of sleep behavior in hydras and other simple animals points to it having a function in maintaining metabolism, so perhaps the "sleep as time to clean house" answer will turn out to be closer to the universal answer.

And who knows?  Maybe the next thing they'll find out is that sponges sleep, or that amoebas sleep.  At that point, we'll have a whole new set of questions, because those are organisms that not only lack a brain, but don't have nerves at all.  But given the ubiquity of snoozing in the animal kingdom, I actually wouldn't be surprised if it were true.