Some of you may have seen the piece done on 60 Minutes a few days ago about UAPs -- unidentified aerial phenomena -- which most of us call UFOs.

It was brought to my attention by a friend and loyal reader of Skeptophilia, who sent me a link where I could watch the entire segment (it's about fifteen minutes long, and well worth the watch).  What stood out to me was that now that the government has gotten seriously interested in these reports, we're finding out that they're (1) common, and (2) bizarre enough that even a skeptic would have trouble coming up with a sensible scientific explanation. 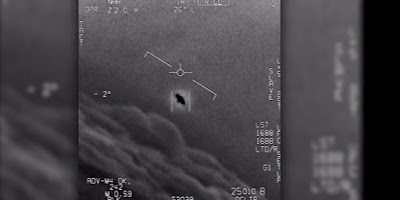 One particularly compelling example is from the commander of the F/A-18F squadron on the USS Nimitz, David Fravor.  Fravor and three others saw a bizarre UAP in 2004 that included "multiple anomalous aerial vehicles" performing maneuvers including descending 25,000 meters in less than a second.  Best of all, the sightings were backed up by radar tracking.  It started when they noticed an area of roiling whitewater in an otherwise calm sea, and went in to investigate.  Fravor says:

So as we're looking at this, her [referring to Lieutenant Alex Dietrich, who was in another plane flying at Fravor's wing] back-seater says, "Hey, Skipper, do you..."  And about when that got out, I said, "Dude, do you, do you see that thing down there?"  And we saw this little white Tic Tac-looking object.  And it's just kind of moving above the whitewater area...  The Tic Tac's still pointing north-south, it goes, click, and just turns abruptly.  And starts mirroring me.  So as I'm coming down, it starts coming up...  It was aware we were there...  I want to see how close I can get... vAnd it's climbing still. vAnd when it gets right in front of me, it just disappears.

Seconds later, the object (or one like it) was caught on radar tracking -- by the USS Princeton, which was sixty miles away!

If this was just one isolated report, it'd be curious enough, but former Navy pilot Ryan Graves says this kind of thing happens every day.  Pilots have been reluctant to speak up about it because of the chance of facing disbelief and ridicule.  But thanks to people like Luis Elizondo, formerly of AATIP (the Pentagon's now-defunct Advanced Aerospace Threat Identification Program), who has worked to get video and audio evidence of UAPs declassified, the phenomena have come to the attention of the powers-that-be (and not just via such dubious conduits as The History Channel).

It worked.  Senator Marco Rubio, at the time head of the Senate Intelligence Committee, asked for a complete (and unclassified) report to be given to the Senate on these sightings by next month.  He said, "I want us to take it seriously and have a process to take it seriously.  I want us to have a process to analyze the data every time it comes in.  That there be a place where this is catalogued and constantly analyzed, until we get some answers.  Maybe it has a very simple answer.  Maybe it doesn't...  Anything that enters an airspace that's not supposed to be there is a threat."

People who are dubious about these reports having an extraterrestrial origin naturally lean toward it being evidence of advanced technology from rival governments, especially Russia and China.  While I am certainly not ready to leap at "aliens" as the answer either, the idea that the sort of thing Fravor and Dietrich report is Russian or Chinese surveillance technology just doesn't make sense to me.  I grant you there are undoubtedly tech programs over there that we here in the United States don't know about, but we're not talking about technology that's ten years ahead of us; what these reports detail (and Fravor and Dietrich's story is just one of hundreds) comes right out of Star Trek.

I find the whole thing fascinating.  I am reminded, of course, of the line from astronomer Neil de Grasse Tyson, "Remember what the 'U' in 'UFO' stands for.  It stands for 'unidentified.'  Well, if it's 'unidentified,' that's where the conversation stops.  You don't say something is 'unidentified' and then go on to say that it 'must be' anything."

But it leaves us with a mystery.  I don't agree with Tyson's opinion that the conversation should stop here.  Surely such an apparently common phenomenon warrants serious inquiry.  I'm also not ready to jump to Marco Rubio's stance that what we're seeing is a threat; if these things -- whatever they are -- have the capabilities they appear to, they're technologically advanced enough that if they'd have meant us harm, they'd already have done it.  I more tend to agree with investigative journalist Leslie Kean, who said, "Most sightings that people have – Oh, I see something in the sky! – those kinds of sightings can usually be explained: the planet Venus, airplanes, comets, shooting stars, birds.  Let’s say five to ten percent are the cases that any conventional explanation can be ruled out; those are the cases that are of interest.  Those are worth investigating."