Any cat owners amongst my readers will undoubtedly know about the strange propensity of cats to climb into boxes.  Apparently it works for cats of all sizes: 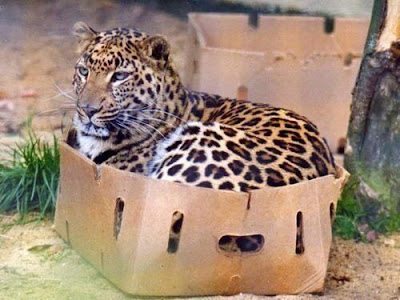 With apologies to Robert Burns, a cat's a cat for a' that.
In fact, it doesn't even have to be a real box: 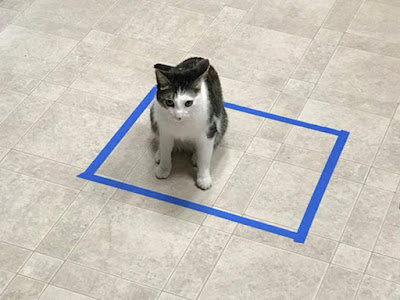 I've never heard a particularly convincing explanation of why cats do this.  Some people suggest it's because being in close quarters gives them a sense of security, perhaps a remnant of when they lived in the wild and slept in burrows or caves.  Me, I suspect it's just because cats are a little weird.  I've been of this opinion ever since owning a very strange cat named Puck, who used to sleep on the arm of the couch with one front and one back leg hanging limp on one side of the arm and the other two dangling over the other side, a pose that earned her the nickname "Monorail Cat."  She also had eyes that didn't quite line up, and a broken fang that caused her tongue to stick out of one side of her mouth.  She was quite a sweet-natured cat, really, but even people who love cats thought Puck looked like she had a screw loose.
The topic comes up because of a delightful piece of research that came out a few days ago in the journal Applied Animal Behaviour Science.  The paper was titled "If I Fits, I Sits: A Citizen Science Investigation into Illusory Contour Susceptibility in Domestic Cats," by Gabriella Smith and Sarah-Elizabeth Byosiere (of Hunter College) and Philippe Chouinard (of LaTrobe University), and looked at data collected from cat owners to find out if cats are fooled by the Kanizsa Rectangle Illusion.
The Kanizsa Rectangle Illusion is an image that tricks the brains into seeing contours that aren't there.  Here's one representation of it: 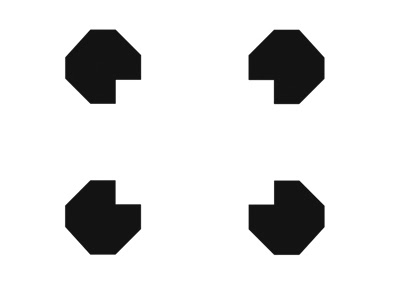 To most people, this looks like an opaque white rectangle laid over four black hexagons, and not what it really is -- four black hexagons with triangular wedges cut out.  Apparently the brain goes with an Ockham's Razor-ish approach to interpreting what it sees, deducing that a white rectangle on top of black hexagons is much more likely than having the cut-out bits just happening to line up perfectly.  It's amazing, though, how quickly this decision is made; we don't go through a back-and-forth "is it this, or is it that?"; the illusion is instantaneous, and so convincing that many of us can almost see the entire boundary of the rectangle even though there's nothing there.
Well, apparently, so can cats.  And, as one would expect, they sit in the middle of the nonexistent rectangle just as if it was a real box.  The authors write:

A well-known phenomenon to cat owners is the tendency of their cats to sit in enclosed spaces such as boxes, laundry baskets, and even shape outlines taped on the floor.  This investigative study asks whether domestic cats (Felis silvestris catus) are also susceptible to sitting in enclosures that are illusory in nature, utilizing cats’ attraction to box-like spaces to assess their perception of the Kanizsa square visual illusion...  [T]his study randomly assigned citizen science participants booklets of six randomized, counterbalanced daily stimuli to print out, prepare, and place on the floor in pairs.  Owners observed and videorecorded their cats’ behavior with the stimuli and reported findings from home over the course of the six daily trials...  This study revealed that cats selected the Kanizsa illusion just as often as the square and more often than the control, indicating that domestic cats may treat the subjective Kanizsa contours as they do real contours.

It's a fascinating result, and indicative that other animal species see the world much as we do.  It still doesn't explain why cats like to sit in boxes, though.  I think my conclusion ("cats are weird") covers it about as well as anything.  But at least in one way, our perceptual/interpretive centers are just as weird as the cats' are.  I'm not inclined to go sit in a box, but it does make me wonder what our pets would think if we showed them other optical illusions.

I doubt my dogs would be interested.  If what they're looking at has nothing to do with food, petting, or playing, they pretty much ignore it.  Must be nice to see the world in such simple terms.

****************************************
Ever get frustrated by scientists making statements like "It's not possible to emulate a human mind inside a computer" or "faster-than-light travel is fundamentally impossible" or "time travel into the past will never be achieved?"
Take a look at physicist Chiara Marletto's The Science of Can and Can't: A Physicist's Journey Through the Land of Counterfactuals.  In this ambitious, far-reaching new book, Marletto looks at the phrase "this isn't possible" as a challenge -- and perhaps, a way of opening up new realms of scientific endeavor.
Each chapter looks at a different open problem in physics, and considers what we currently know about it -- and, more importantly, what we don't know.  With each one, she looks into the future, speculating about how each might be resolved, and what those resolutions would imply for human knowledge.
It's a challenging, fascinating, often mind-boggling book, well worth a read for anyone interested in the edges of scientific knowledge.  Find out why eminent physicist Lee Smolin calls it "Hugely ambitious... essential reading for anyone concerned with the future of physics."
[Note: if you purchase this book using the image/link below, part of the proceeds goes to support Skeptophilia!]