In the Star Trek: The Next Generation episode "Night Terrors," the ship gets trapped in a phenomenon called "Tyken's Rift," one of the myriad hand-waving scientific phenomena they came up with as plot devices.  It's some sort of rip in the space-time continuum -- I swear, given how often it rips in that show, you'd swear the space-time continuum was made of wet Kleenex -- and the upshot is that it causes a weird result for the crew.  They lose their ability to drop into REM sleep, so they're prevented from dreaming.

And it causes them to start hallucinating, and eventually, to go violently insane.  It'd happened to another ship, whose crew ended up killing each other.  This led to one of the single creepiest images the show ever came up with, while Dr. Crusher is in the morgue doing post-mortems on the dead crew members -- and is beginning to hallucinate herself. 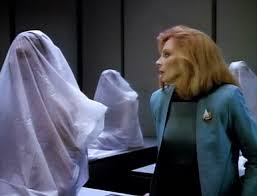 There are a number of aspects of the episode that are pretty silly, but this one scene works brilliantly, mainly because it highlights exactly how surreal and terrifying dreams can be.  While you're inside them, they seem absolutely real.  In the last couple of years, I've had a number of dreams of being attacked by an animal -- odd in and of itself, because I always have gotten along with animals.  Dogs, in fact, like me a great deal better than people do.  But each time, I'm minding my own business, and some animal charges me, causing me to wake up, and more than once, to shout out, waking my poor long-suffering wife.

Why do I dream this stuff?  In fact, why does anyone dream what they do?  That's an interesting, and not an easy, question.  It brings to mind a topic that came periodically in my biology classes, involving the difference between proximal and ultimate causes.  In a proximal sense, we know that dreaming is caused by an activation of the visual and auditory cortices and a reduction in activity of the prefrontal cortex during REM sleep, triggering us to imagine vivid images and sounds while simultaneously shutting off one of the primary "reality filters" we have (explaining why dreams can seem to make sense while we're in them, and completely batshit insane once we wake up).

But when students asked "why do we dream?" that's not usually what they meant.  They were looking for a deeper, ultimate cause -- what purpose does it serve?  What is the overarching reason for dreaming?  And there, we go into what is largely uncharted territory.  Science, it turns out, is not so good at teleology -- the analysis of ultimate causes, explanations that don't just look at the mechanism, but the purpose or driver behind them.

This is why I was a little dubious about a paper by Erik Hoel of Tufts University that appeared in the journal Patterns last week.  Entitled, "The Overfitted Brain: Dreams Evolved to Assist Generalization," Hoel claims that his study of artificial intelligence/deep neural networks suggests that the purpose of dreams is to help us generalize what we've learned -- that our ordinary experience gives us limited ability to develop flexibility (i.e., we usually are confronted with the same stuff over and over again), so dreams interject a hefty dose of pure weirdness to help us learn to deal with the unexpected.

Understanding of the evolved biological function of sleep has advanced considerably in the past decade.  However, no equivalent understanding of dreams has emerged.  Contemporary neuroscientific theories often view dreams as epiphenomena, and many of the proposals for their biological function are contradicted by the phenomenology of dreams themselves.  Now, the recent advent of deep neural networks (DNNs) has finally provided the novel conceptual framework within which to understand the evolved function of dreams.  Notably, all DNNs face the issue of overfitting as they learn, which is when performance on one dataset increases but the network's performance fails to generalize (often measured by the divergence of performance on training versus testing datasets).  This ubiquitous problem in DNNs is often solved by modelers via “noise injections” in the form of noisy or corrupted inputs.  The goal of this paper is to argue that the brain faces a similar challenge of overfitting and that nightly dreams evolved to combat the brain's overfitting during its daily learning.  That is, dreams are a biological mechanism for increasing generalizability via the creation of corrupted sensory inputs from stochastic activity across the hierarchy of neural structures.  Sleep loss, specifically dream loss, leads to an overfitted brain that can still memorize and learn but fails to generalize appropriately.

It's an interesting idea.  And I have to admit that the dream I had a few nights ago, wherein a horse jumped a fence and charged straight at me, hooves flying and teeth bared, is pretty fucking stochastic.  I am, however, a bit wary of any claim of the form "X is a widespread phenomenon, and it happens because of Y."  Complex phenomena -- which dreaming certainly is, given people's varied experience of it -- seldom have only a single proximal cause, much less a single ultimate cause.  And as I said, ultimate causes are notoriously tricky to identify anyhow.  Even some simpler questions to frame than dreaming -- such as why humans have upright posture -- have yet to be settled.  (Some suggestions are that it was to give us farther sight distance in the grasslands where we evolved, to leave our hands free to manipulate tools, that it made it easier to wade in order to gather aquatic organisms like shellfish for food, that it improved walking and running endurance, that it allowed our ancestors to reach fruit in trees more easily, that it made it easier for mothers to hold their infants while moving from place to place...  In point of fact, it could be any of these, all of these, or various other advantages not on the list, and it would be extremely difficult to discern which is correct.)

All of which is not meant to criticize Hoel's hypothesis specifically, because it's pretty intriguing.  I'm just always hesitant to jump to an appealing explanation just because "it sounds like it makes sense."  Reality is awfully complex, and explanations can be hard to come by.

But whatever the reason is, I'd sure like it if I could stop dreaming about being attacked by vicious animals.  My wife would like it, too.  Being awakened in the middle of the night because your husband is dreaming he's being attacked by a raging wombat kind of gets old after a while.