What would an artificial intelligence dream about?

We may have just found out.

An AI development company called Nested Minds is working on creating increasingly sophisticated deep learning networks modeled on the connectivity of the human brain, and especially the brain's ability to form links between disparate ideas and images -- something that is a significant part of the creative process, and also seems to account for a lot of dream content.  Their project, called "Huxley," has generated some pretty amazing and provocative pieces.  On their home page, they describe their project this way:

Nested Minds unites an interdisciplinary team of neuroscientists, mathematicians, developers, social scientists, and entrepreneurs with over 100 years of combined experience building predictive analytics and machine learning models across multiple industries...  We designed Huxley, an AI artist who takes concepts rooted in human language and translates them into provocative and daring imagery redefining the boundaries of imagination.

What Huxley excels at is what we would describe in humans as free association.  For example, the word "keyboard" prompted Huxley to come up with an image of a zebra; the link, presumably, was keyboard > black and white > zebra.  A bass guitar generated a fish; bass has both meanings (although pronounced differently).  While this may seem to be a rudimentary sort of punning, it's not so different from what happens during a long, rambling conversation.  I can remember my younger son and I talking and at some point trying to figure out how we got where we ended up, backtracking every link and reconstructing the whole causal chain -- Doctor Who > time travel > wormholes > astronomy > Galileo > the Inquisition > Monty Python > King Arthur > Camelot > Cornwall etc.

What I find absolutely fascinating is that Nested Minds turned Huxley loose on a song -- a new release from Duran Duran called "Invisible." 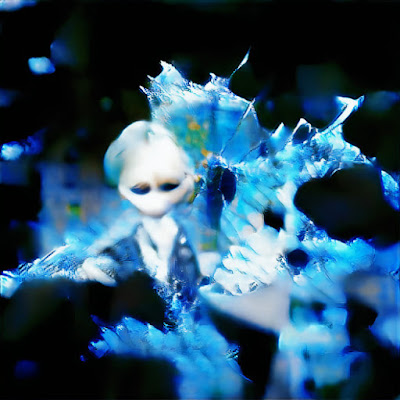 The result is weird, surreal, beautiful, and a little disturbing.  (The song is pretty awesome, too.)  Watch it and see what you think:

"When you look at Huxley, this is the sort of first new generation of this type of intelligence, but that will grow and be useful in many, many other fields," singer/keyboardist Nick Rhodes said, in an interview in ITV. "It's incredible new technology because before AI has been more mathematical, this one's actually more arts based.  It does actually dream and think in different ways...  I think we've always viewed technology as something that we can use that can really help us.  We're not intimidated by it...  And if you can use it to enhance your toolkit for what you're doing, I think that's fantastic."

Huxley was given two things -- the lyrics, and video clips of the band singing, and with those two inputs it created the entire video.  And while some of the associations you can fathom (such as the keyboard and the bass guitar), others are obscure and/or complex enough to resist parsing.

"They just took those images of us all singing and put them into the program," said band member Roger Taylor.  "And it came out with these incredible kind of ghostly images which kind of blew me away."
Is this creativity -- I mean, of course, on the part of Huxley, not of its creators nor of Duran Duran themselves?  I don't think you can call it anything other than that.  To me, a large part of creativity is novelty; when we say, "wow, that was really creative," we often mean, "I would never have come up with that."  There has to be some technical skill too, of course.  Depicting that novel connection in a vivid manner requires that you have significant ability in your chosen medium, whether it's writing, music, art, or any other creative endeavor.  But simple technical skill isn't enough.  That spark -- that melding of ideas, words, or images in a unique way -- is absolutely essential, or what you have is no more than a rehashing (however well executed) of what you've seen other people do.
It's true in science, too, isn't it?  A really groundbreaking discovery occurs because someone put data together in such a way as to generate an insight no one else had.  As just one of many examples, take Fred Vine's and Drummond Matthews's development of the model of plate tectonics, using data from magnetic traces on the ocean floor, the geology of mountain ranges on opposite sides of the Atlantic Ocean, the prehistoric animal fossils that had been dug up in Africa and South America, and the presence of active volcanoes along the Mid-Atlantic Ridge.  We'd had all of that information prior to Vine and Matthews; but they were the first to have the insight to put the pieces together, and what they came up with revolutionized the whole field of geology.
That's creativity.
But back to Huxley.  What I find most amazing about this is that this is the first attempt at a music video created entirely by an artificial intelligence, so the creative output can only be expected to improve over time.  What will Huxley, or something like it, be creating in ten years?  Fifty years?  A century?
I think we creative types better hold onto our hats, because my guess is that we're seeing something humanity has never seen before -- the creative output of a non-human intelligence.  And what it can teach us about our own creativity might be only the first step into what is truly uncharted territory.
***********************************
Saber-toothed tigers.  Giant ground sloths.  Mastodons and woolly mammoths.  Enormous birds like the elephant bird and the moa.  North American camels, hippos, and rhinos.  Glyptodons, an armadillo relative as big as a Volkswagen Beetle with an enormous spiked club on the end of their tail.
What do they all have in common?  Besides being huge and cool?
They all went extinct, and all around the same time -- around 14,000 years ago.  Remnant populations persisted a while longer in some cases (there was a small herd of woolly mammoths on Wrangel Island in the Aleutians only four thousand years ago, for example), but these animals went from being the major fauna of North America, South America, Eurasia, and Australia to being completely gone in an astonishingly short time.
What caused their demise?
This week's Skeptophilia book of the week is The End of the Megafauna: The Fate of the World's Hugest, Fiercest, and Strangest Animals, by Ross MacPhee, which considers the question, and looks at various scenarios -- human overhunting, introduced disease, climatic shifts, catastrophes like meteor strikes or nearby supernova explosions.  Seeing how fast things can change is sobering, especially given that we are currently in the Sixth Great Extinction -- a recent paper said that current extinction rates are about the same as they were during the height of the Cretaceous-Tertiary Extinction 66 million years ago, which wiped out all the non-avian dinosaurs and a great many other species at the same time.
Along the way we get to see beautiful depictions of these bizarre animals by artist Peter Schouten, giving us a glimpse of what this continent's wildlife would have looked like only fifteen thousand years ago.  It's a fascinating glimpse into a lost world, and an object lesson to the people currently creating our global environmental policy -- we're no more immune to the consequences of environmental devastation as the ground sloths and glyptodons were.
[Note: if you purchase this book using the image/link below, part of the proceeds goes to support Skeptophilia!]