The concept of the umwelt is a little mind-boggling.
It's defined as "the world as perceived by a particular organism."  In superficial terms we know that a dog must perceive life differently than we do.  For example, we know their senses of smell are a lot more keen than ours are, but the magnitude is staggering.  They have about fifty times the number of olfactory receptors than we do (three hundred million as compared to six million), so their world must be as vivid a tapestry of smells as ours is a tapestry of sights and sounds.
While it might be possible to imagine what it's like to have an enhanced sense, what about having a sense we lack entirely?  A number of animals, including sharks, platypuses, and knifefish, have an ability to sense electric fields, so the voltage change in the water around them registers as a sensory input, just as light or sound or taste does for us.  They use this sense to locate prey, because the neuromuscular systems of the animals they're hunting create a weak electrical discharge, which all of these animals can "see."
In the amazing 2015 TED Talk "Can We Create New Senses for Humans?",  neuroscientist David Eagleman explores what it would be like to expand our umwelt.  He has designed a vest, to be worn against the skin, that has a series of motors that create tiny vibrations.  The vest's input can be whatever you want; in one demonstration, sounds picked up by a microphone are the input used to create a pattern of vibrations on the chest and back.  With only a couple of days of training, a profoundly deaf individual was able to translate the patterns into a perception of the sounds, and correctly identify spoken words.
His brain had basically taken a different peripheral input device and plugged it into the auditory cortex! 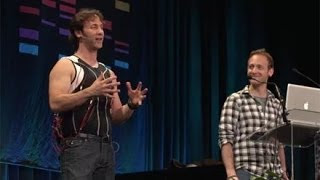 Experiments with other "peripherals" have included using a pattern of weak electrical tingles transmitted onto the tongue via a horseshoe-shaped flat piece of metal to allow blind people to navigate around objects while walking, and even get good enough with it that they can throw an object into a basket.  One of Eagleman's experiments with the vest trained people using an input from an unidentified source -- all they did was press one of a pair of buttons and found out if their choice was right:

A subject is feeling a real-time streaming feed from the Net of data for five seconds.  Then, two buttons appear, and he has to make a choice.  He doesn't know what's going on.  He makes a choice, and he gets feedback after one second.  Now, here's the thing: the subject has no idea what all the patterns mean, but we're seeing if he gets better at figuring out which button to press.  He doesn't know that what we're feeding is real-time data from the stock market, and he's making buy and sell decisions.  And the feedback is telling him whether he did the right thing or not.  And what we're seeing is, can we expand the human umwelt so that he comes to have, after several weeks, a direct perceptual experience of the economic movements of the planet.

The wildest thing is that the peripheral you add doesn't have to be input; it can be output.  Two different papers, both in the journal Science, have shown that you can add an output device, and like with the inputs -- all it takes is a little training.

In the first, "A Brain-Computer Interface that Evokes Tactile Sensations Improves Robotic Arm Control," test subjects have a computer interface device implanted into their brain, which then translates thoughts into movements of a robotic arm, analogous to what an intact neuromuscular system is doing to our actual arms.  This has been doable for a while, but the advance in this study is that the robotic arm has sensors that provide feedback, again just like our own systems do when working properly.  Think about picking up a coffee cup; you adjust the pressure and position of your grip because you're constantly getting feedback, like the temperature of the cup, the weight and balance, whether your fingers are hanging on well or slipping, and so forth.

Here, the feedback provided by the sensors on the robotic arm cut in half the time taken for doing an action without mishap!  The brain once again picked up very quickly how to use the additional information to make the output go more smoothly.

In the second, people were trained with a "third thumb" -- an artificial extra digit strapped to the hand on the pinky-finger side.  It's controlled by pressure sensors under the toes, so you're using your feet to move something attached to your hand while simultaneously using your brain to control your other hand movements, which seems impossibly complicated.  But within a day, test subjects could perform tasks like building a tower from wooden blocks using the augmented hand... even when distracted or blindfolded!

Study author Paulina Kieliba, of University College - London's Institute of Cognitive Neuroscience, said, "Body augmentation could one day be valuable to society in numerous ways, such as enabling a surgeon to get by without an assistant, or a factory worker to work more efficiently.  This line of work could revolutionize the concept of prosthetics, and it could help someone who permanently or temporarily can only use one hand, to do everything with that hand.  But to get there, we need to continue researching the complicated, interdisciplinary questions of how these devices interact with our brains."

Co-author Tamar Makin summed it up: "Evolution hasn’t prepared us to use an extra body part, and we have found that to extend our abilities in new and unexpected ways, the brain adapts the representation of the biological body."

I think what amazes me most about all this is the flexibility of the brain.  The fact that it can adjust to such radical changes in inputs and outputs is phenomenal.  Me, I'm waiting for something like Tony Stark's suit in Iron Man.  That'd not only allow me to fight crime, but it'd make yard chores a hell of a lot easier.