I've recognized for some time that I'm very sound-sensitive.  When I'm around loud, chaotic noise for too long, I get a little frantic, and if I can't get away it can bring on a full-blown anxiety attack.  What I've found interesting is how suddenly the switch can flip between "I'm okay" and "I've got to get out of here now."  In the pre-pandemic days, my wife and a few of our friends used to go to a local bar after Cornell hockey games, and like just about every bar in the world, it was noisy and crowded.  For a while, I'd be fine.  Okay, it wasn't my preferred environment even so, but I was coping.  Then, with a startling suddenness, I'd find I couldn't even hear what my friends were saying -- it was all lost in a gigantic roar of what sounded to me like white noise.

At that point, it was get out or risk a panic attack. 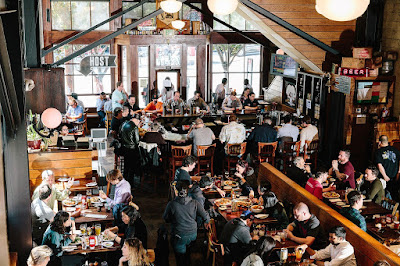 I've often wondered what the difference is between my brain and the brains of people who actually enjoy noisy chaos.  Along the same lines, you might be questioning how I managed to survive for 32 years as a high school teacher, because public schools are kind of inherently loud places.

As far as the latter goes, I coped by taking breaks.  I closed my classroom door during my planning period, and student contact during that time was by prior arrangement only.  I avoided the worst parts of it -- I very early on decided that rules or no rules, I wasn't attending pep assemblies or chaperoning school dances.  Most importantly, I made sure to take rests after the school day was over -- not naps, per se, but silence breaks.  Fortunately, my wife and I live in a big old house out in the country, so after school I usually had a good couple of hours after work to relax and play with my dog and, most importantly, enjoy the comparative quiet.

Turns out I'm not alone.  There are lots of people who have what neuroscientists call SPS (sensory processing sensitivity).  This phenomenon, and how people like me have coped with the extra stress of the pandemic and everything that's come with it, was the subject of a paper in the journal Neuropsychobiology by a team led by Bianca Acevedo of the University of California - Santa Barbara's Department of Psychological and Brain Sciences.  In "Sensory Processing Sensitivity Predicts Individual Differences in Resting-State Functional Connectivity Associated with Depth of Processing," Acevedo and her team took test subjects who had been evaluated for their proneness to SPS, and gave them an emotionally evocative task -- looking at faces of people experiencing various strong emotions (positive and negative), and either going from one photograph to the next without a break or doing the equivalent of a mental palate-cleansing in between (counting backwards from a large number by sevens).

They found some fascinating patterns.  People who scored high on the SPS scale showed greater activity during breaks between the parts of the brain called the hippocampus and the precuneus, which are known to be involved in episodic memory consolidation.  From the fMRI studies, highly sensitive people showed a progressive weakening of signals between the periaqueductal gray matter and the amygdala, two parts of the brain controlling our perceptions of anxiety and distress, especially when they weren't given breaks.  Both trends were not as pronounced in people who scored lower on the SPS scale.

"Behaviorally, we observe it as being more careful and cautious when approaching new things," Acevedo said in a press release.  "In a new situation, those with the trait are more likely to hang back and see what happens.  Another broad way of thinking about it, that biologists have been using to understand people’s individual differences in responses to different things, is that the person with high sensitivity will be more responsive, both for better and for worse.  So while people with high sensitivity might get more rattled by uncomfortable situations, they might also experience higher levels of creativity, deeper bonds with others and a heightened appreciation of beauty.  What we found was a pattern that suggested that during this rest, after doing something that was emotionally evocative, their brain showed activity that suggested depth of processing, and this depth of processing is a cardinal feature of high sensitivity."
So SPS isn't all bad.  Besides my weird reaction to loud environments, it also explains why I get overwhelmed when I spend too much time doomscrolling through social media, something that occupied way too much of my time during the Former Guy's administration.  I found that if I didn't go on periodic news fasts, it would effectively short-circuit my ability to concentrate.  So emotional noise can be as debilitating to people with SPS as actual noise is.
"Take a break," Acevedo said.  "For all of us, but especially for the highly sensitive, taking a few minutes’ break and not necessarily doing anything but relaxing can be beneficial.  We’ve seen it at the behavioral level and the level of the brain."
Good advice.  These days we all need to be more cognizant of what helps us to cope with the ramped-up emotional stress we've been exposed to.  For me, listening to a quiet piece of music, walking around outside, or going for a run has the effect of discharging a lot of the built-up anxiety.  It's all a matter of finding what kind of pressure valve works for you.  But as the Acevedo et al. study shows, if the result is a better ability to manage the chaotic world we live in, it's well worth the search.