The running coach I work with has a good laugh at me nearly every week because I'm directionally impaired.  He tells me, "Okay, ten lateral lunges, starting on the right side," and the chance is 50/50 I'll lunge to the left.  I was talking with my dear friend, the amazing writer K. D. McCrite, about this -- turns out she suffers from the same malady, and we're not alone.  Current research has found that about twelve percent of adults have poor left-right discrimination, which can lead to some embarrassment... or worse.  A 2011 report found that forty wrong-side surgeries are done in the United States every week.  We're talking well-educated, highly trained professionals here, so clearly, it's nothing to do with intelligence.

K. D. is our guest here on Skeptophilia today, sharing her experiences of having issues with knowing which side is which.  And as an aside: when you're done reading this, check out her books...!

Just outside the open window next to my desk, water dribbled from the spray nozzle of the hose and drove me nutty.  The man of the house told me the nozzle needs to be either replaced or adjusted.  I lack the strength to turn off the outdoor spigot to halt the flow, the hubs wasn’t home to take care of it, so when the young man next door came home from school, I asked him for help.  Tall and strong, this high schooler would be able to take care of the problem.

I reminded him that he needed to turn it to the right to shut off the water.  So why did he keep turning it to the left?  I kept muttering, silently, “To the right, to the right!”

He accomplished the task, and then…

And then I was so relieved I had not hollered “TO THE RIGHT!” because he’d been doing just that.

I have always had a hard time with left and right.  It’s so much easier for me to understand north and south, or landmarks, or if you simply point.  This left and right mess causes me to pause every time.  It will congeal in my brain especially when I’m under stress or someone is watching me.  It’s confounding, embarrassing, and hard to explain to that person sneering at you.

One time stands out sharply in my memory.  I was visiting a friend, an older man whom I highly regarded and respected.  He asked me to turn down the radio on the other side of the room.  There were several knobs along the front of that old radio, but none of them were marked for volume control.

Of course, I immediately reached for the knobs on the right.

Immediately, I froze, unable to make the adjustment he asked for.  He’d never been verbally abusive to me before.  My frozen state made him even angrier and more abusive.  His wife quickly adjusted the volume, then touched my shoulder and told me it was okay, she understood.  He, on the other hand, continued to mumble and curse, and I truly believed my intellect was deeply flawed if I couldn’t grasp something as simple as right and left.  Later, I realized I didn’t need that abusive friend in my life, nor did he deserve my respect.

It stays with me, though, those times when I’ve been berated for this inability to differentiate quickly between left and right.  Believe me, I beat myself up plenty, and still do, even though there is a scientific reason for this disability. 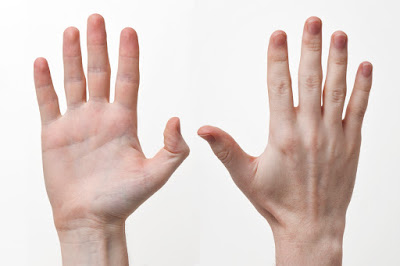 [Image licensed under the Creative Commons Evan-Amos, Human-Hands-Front-Back, CC BY-SA 3.0]
If you have a friend or loved one who struggles with this, the last thing they need is to feel foolish or ignorant, so be patient.  You will likely have to be patient about this all their lives because I don’t think there is a pill, procedure, counseling, or surgery that can take care of it.  Aging certainly doesn’t make it any easier for us.  It might help if you consider for a moment how you might feel if it was your struggle.  Suppose someone told you to turn left, but before you could do that, you had to think about it, had to look at your hands to see which one had the ring or which one you write with or which one has that little birthmark?

I’ve thought of getting L and R tattooed on the appropriate hands, but I’d still have to pause and look.
****************************************
Ever get frustrated by scientists making statements like "It's not possible to emulate a human mind inside a computer" or "faster-than-light travel is fundamentally impossible" or "time travel into the past will never be achieved?"
Take a look at physicist Chiara Marletto's The Science of Can and Can't: A Physicist's Journey Through the Land of Counterfactuals.  In this ambitious, far-reaching new book, Marletto looks at the phrase "this isn't possible" as a challenge -- and perhaps, a way of opening up new realms of scientific endeavor.
Each chapter looks at a different open problem in physics, and considers what we currently know about it -- and, more importantly, what we don't know.  With each one, she looks into the future, speculating about how each might be resolved, and what those resolutions would imply for human knowledge.
It's a challenging, fascinating, often mind-boggling book, well worth a read for anyone interested in the edges of scientific knowledge.  Find out why eminent physicist Lee Smolin calls it "Hugely ambitious... essential reading for anyone concerned with the future of physics."
[Note: if you purchase this book using the image/link below, part of the proceeds goes to support Skeptophilia!]