It's a little odd that someone as center-of-attention-phobic as I am has chosen something that is bound to garner close looks.  I'm referring to my tattoos, which are obvious and colorful -- and include a full sleeve, so they're a little hard to hide.

Virtually everyone who comments on them, however, is complimentary.  With good reason; my artist, James Spiers of Model Citizen Tattoos in Ithaca, New York, is -- in a word -- brilliant, and realized my vision of what I wanted just about perfectly. 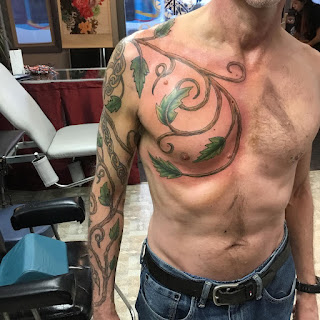 Just after it was finished

Not everyone's a fan, of course.  I was given the stink-eye by a sour-faced old lady in a local hardware store a while back, who informed me that having tattoos meant I was going to hell.

My response was, "Lady, that ship sailed years ago."

But if I do end up in hell because of my ink, I'll have a lot of company.  Not only is tattooing pretty common these days -- since I got my first one, about twenty years ago, it's gone from being an infrequent sight to just about everywhere -- humans have been decorating their bodies for a long time.  Ötzi "the Ice Man," a five-thousand-year-old body found frozen in glacial ice on the Austrian-Italian border, had 61 tattoos, mostly on his legs, arms, and back.  (Their significance is unknown.)  In historical times, tattooing has been observed in many cultures -- it was widespread in North and South American Indigenous people and throughout east Asia and Polynesia, which is probably how the tradition jumped to Europe in the eighteenth century (and explains its associations with sailors).

The role of self-expression in tattoos varies greatly from person to person.  Ask a dozen people why they chose to get inked and you'll get a dozen wildly different answers.  For me, it's in honor of my family and ethnic roots; the Celtic snake is for my wildlife-loving, half-Scottish father, the vines for my gardener mother.  But the reasons for getting tattooed are as varied as the designs are.

The reason all this comes up is because of a discovery that was described this week in the Journal of Archaeological Science of the oldest-known tattoo tools, some sharpened turkey leg and wing bones found near Fernvale, Tennessee that predate Ötzi by over five hundred years.  The hollow pointed tips of the bone tools still contained residue of black and red pigments, and the microscopic wear on the tips and edges match that found on tattoo tools found at other sites around the world.

The ordeal of being jabbed over and over with a sharpened bird bone, though, sounds a lot more painful than what I underwent, which was bad enough. 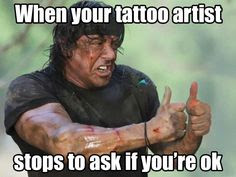 But it was worth it.  After I stopped screaming.

In any case, I find it fascinating how old the drive to adorn our bodies is, and also that the designs had (and have) such depth of meaning that people were willing to wear them permanently.  For myself, I've never regretted them for a moment; I'm proud of my ink, whatever the sour-faced little old ladies of the world might think of it.  And knowing that what I have is part of a tradition that goes back at least six thousand years gives me a connection to the rituals and culture of the past.

And for me, that's something to cherish.  Even if I do end up in hell because of it.

***********************************
Saber-toothed tigers.  Giant ground sloths.  Mastodons and woolly mammoths.  Enormous birds like the elephant bird and the moa.  North American camels, hippos, and rhinos.  Glyptodons, an armadillo relative as big as a Volkswagen Beetle with an enormous spiked club on the end of their tail.
What do they all have in common?  Besides being huge and cool?
They all went extinct, and all around the same time -- around 14,000 years ago.  Remnant populations persisted a while longer in some cases (there was a small herd of woolly mammoths on Wrangel Island in the Aleutians only four thousand years ago, for example), but these animals went from being the major fauna of North America, South America, Eurasia, and Australia to being completely gone in an astonishingly short time.
What caused their demise?
This week's Skeptophilia book of the week is The End of the Megafauna: The Fate of the World's Hugest, Fiercest, and Strangest Animals, by Ross MacPhee, which considers the question, and looks at various scenarios -- human overhunting, introduced disease, climatic shifts, catastrophes like meteor strikes or nearby supernova explosions.  Seeing how fast things can change is sobering, especially given that we are currently in the Sixth Great Extinction -- a recent paper said that current extinction rates are about the same as they were during the height of the Cretaceous-Tertiary Extinction 66 million years ago, which wiped out all the non-avian dinosaurs and a great many other species at the same time.
Along the way we get to see beautiful depictions of these bizarre animals by artist Peter Schouten, giving us a glimpse of what this continent's wildlife would have looked like only fifteen thousand years ago.  It's a fascinating glimpse into a lost world, and an object lesson to the people currently creating our global environmental policy -- we're no more immune to the consequences of environmental devastation as the ground sloths and glyptodons were.
[Note: if you purchase this book using the image/link below, part of the proceeds goes to support Skeptophilia!]