So far loyal readers of Skeptophilia have sent me four different links to the same underlying story, along with a message along the lines of "Whaddya think of this?"  The links all take various angles on a paper by Rhawn Gabriel Joseph and Xinli Wei in Advances in Microbiology claiming that photos taken by the Mars rover Curiosity show the presence of live fungi.

Without further ado, here are the photos, which are real enough: 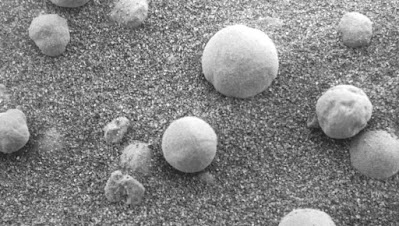 [Photos are in the Public Domain courtesy of NASA/JPL]
When I saw the top photo, my immediate thought was that if you think the only way to explain wiping away stuff and having it reappear is if the stuff is a living organism, you need to come take a look at how long furniture in my house remains clean after being dusted.  I'll admit that I'm kind of housework-impaired, and chances are one day I'll go missing and when people come to investigate they'll find me trapped inside an enormous dust bunny, but still, the fact remains that "dirt blows around" seems to be a universal tendency.  Second, the lower photo looks like a fungus or at least fungus spores, but saying "it looks like X, so it is X" is not how science is done.
The claim has generated a lot of hype and also a lot of backlash from actual science types, such as this scathing piece by Tristan Greene over at TheNextWeb, wherein Joseph and Wei basically get their asses handed to them for leaping to an entirely unwarranted conclusion based on a handful of photographs that can be explained by any number of other, more likely hypotheses.  There are lots of microscopic round things besides fungal spores, so without any sort of biochemical analysis there's no way these can conclusively be labeled as alive, much less as terrestrial-type fungi.
Rhawn Gabriel Joseph, however, is not a man to take this sort of criticism lying down.  Saying Joseph is "combative" is a little like saying Stalin had "anger management issues."  He has sued NASA for ignoring his previous claims about life on Mars, sued Springer (the academic publishing company that publishes the journals Nature and Scientific American) for retracting one of his papers, and on his website defiantly proclaims that he has "published major scientific studies in the fields of neuroscience, development, embryology, evolution, quantum physics, consciousness, genetics, and astrobiology."
Funny, if he's an expert in basically everything, how just about every reference to him in actual scientific journals describe him as a "crank," a "kook," and "a self-aggrandizing spotlight seeker."
Then there's the issue of the journal the paper is published in -- Advances in Microbiology.  AiM is one of the journals owned by SCIRP -- Scientific Research Publishing -- a China-based company long associated with predatory, pay-to-play practices:

[T]here may be some strong and honest articles published in SCIRP journals. However, these articles are devalued and stigmatized by association with all the junk science that SCIRP publishes.  The authors of the good articles are being victimized by the publisher’s policy of publishing pseudoscientific articles like “Basic Principles Underlying Human Physiology.”  SCIRP only rarely retracts articles, preferring instead to protect the interests of its customers, the paying authors.

Oh, and apropos of not much, here's the photo of himself he has on his website: 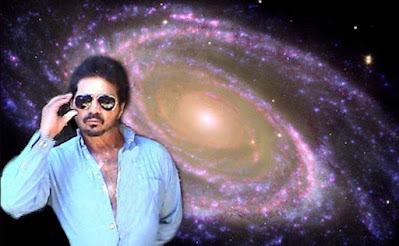 No, I'm not joking.
The issue here goes back to the ECREE Principle; Extraordinary Claims Require Extraordinary Evidence.  Okay, maybe those are Martian fungal spores.  But before you can conclude that, you'd better have some damn good evidence supporting your claim, something more than "we see stuff moving around":

Hundreds of dimpled donut-shaped "mushroom-like" formations approximately 1mm in size are adjacent or attached to these mycelium-like complexes.  Additional sequences document that white amorphous masses beneath rock-shelters increase in mass, number, or disappear and that similar white-fungus-like specimens appeared inside an open rover compartment.  Comparative statistical analysis of a sample of 9 spherical specimens believed to be fungal "puffballs" photographed on Sol 1145 and 12 specimens that emerged from beneath the soil on Sol 1148 confirmed the nine grew significantly closer together as their diameters expanded and some showed evidence of movement.

Look, no one would be more excited than me if the rovers did discover Martian life.  Honestly, it's not that I think microbial life on Mars is all that unlikely.  It's just that you don't support your claims in science by pointing and yelling, "Hey, lookit that!" over and over.  If these are fungal spores, then there are a lot of them, so it's only a matter of time before they'll be detected by the actual rigorous biochemical analysis the rovers are equipped to do.
And I can guarantee that the results will be published in a reputable science journal, not an open-access affair like Advances in Microbiology, and almost certainly the lead author won't be some Disco-Era refugee who claims to be the intellectual equivalent of Stephen Hawking, David Eagleman, Charles Darwin, Carl Sagan, and Gregor Mendel put together.
So, sad to say, that's where the issue stands.  If I'm wrong, I will happily eat crow and publish an update and/or retraction.  I'd like to think the firestorm Joseph has ignited will cause him to retreat in disarray, but his motto seems to be "Death Before Backing Down," so I'm guessing this isn't the last we'll hear from him on the topic.  Stay tuned.