Every once in a while, the targeted-ad software that decides which advertisement to paste to which website screws up, and you'll see something so poorly placed that it's comical.  This happened yesterday, when the software evidently picked up words from my blog like "psychic" and "quantum" and "alternate universes" without picking up words like "nonsense" and "bullshit," and pasted an advertisement for "Quantum Jumping" at the end of my last post.

Naturally I had to click on the link, and was greeted by a banner headline that said, "Jump into a universe of infinite possibilities."  I thought at first that they were speaking metaphorically, that whatever your situation, you can change your life's trajectory -- but no.  Apparently these people are really claiming that the 80s science fiction series Quantum Leap was a scientific documentary, and that if you don't like your current life, you can just leap into a different universe.

Since the 1920s, quantum physicists have been trying to make sense of an uncomfortable and startling fact -- that an infinite number of alternate universes exist.  Leading scientists like Stephen Hawking, Michio Kaku, and Neil Turok, all of whom are responsible for life-changing breakthroughs in the field of quantum physics, have all suggested the existence of multiple universes...  This jaw-dropping discovery was first made when, trying to pinpoint the exact location of an atomic particle, physicists found it was virtually impossible.  It had no single location.  In other words, atomic particles have the ability to simultaneously exist in more than one place at a time.  The only explanation for this is that particles don’t only exist in our universe -- They can spark into existence in an infinite number of parallel universes as well.  And although these particles come to being and change in synchronicity, they are all slightly different...  Drawing on the above-mentioned scientific theory and merging it with 59 years of study into mysticism and the human mind, Burt Goldman has come to one shocking conclusion: In these alternate universes, alternate versions of you are living out their lives.

To make a long, drawn-out explanation a little shorter, Goldman claims that through his training course (downloadable for $97, or available on DVDs starting at $197) you can mentally slide into these alternate universes, meet alternate versions of yourself, and learn from them.  It is how, he explains, he learned how to paint, to write, and (presumably) to market a serious bill of goods to the gullible.
Well, first of all, he evidently learned his physics from watching Lost in Space reruns, because the Heisenberg Uncertainty Principle (which I believe is what he is referencing when he mentions particles not having single locations) has nothing to do with things "sparking into existence in an infinite number of parallel universes."  What he's talking about is the Many Worlds interpretation of quantum mechanics, which is a fascinating but unproven (and probably unprovable) way of resolving the Schrödinger's cat paradox.  It says, in essence, that whenever a particle's wave function collapses (it is localized in one position), it splits the universe -- and in those alternate universes, the particle was localized in every other possible position it could have occupied. 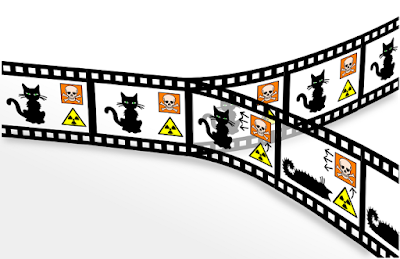 [Image licensed under the Creative Commons courtesy of Christian Schirm]
Now, while the Many-Worlds interpretation is intriguing, and has been the subject of thousands of plot twists on Star Trek alone, it has never been demonstrated experimentally.  (It's also the basis of my novel Lock & Key, available in fine bookstores everywhere, but which I feel obligated to point out is fiction.)  Most physicists believe that even if this interpretation is correct, those theoretical alternate universes are "closed off" to us permanently after the event that caused the split, and therefore such experimental verification is impossible by definition.  Thus, this model remains an interesting, but untestable, idea.

But the thing that pissed me off the most about the site was the namedropping.  Using quotes from such luminaries as Hawking, Kaku, Max Planck, Nikola Tesla, and various others is both unfair to those quoted (who, I suspect, would laugh Goldman's ideas out of the room) and is also Appeal to Authority in its worst form.  If I were one of the scientists quoted, I'd be pretty perturbed.

I also find it interesting that he claims that you can learn from your alternate selves, because in some universe you are a published author, a rock star, or a Nobel-prize-winning scientist.  Just given the law of averages, wouldn't you also expect that it's a 50-50 chance that in any given alternate universe, you'd be instead a bum, a felon, or dead?  Although, to be fair, I'd guess that you'd learn something from meeting those alternate selves, too.  It's like James Randi's criticism of mediums; that all of the dead relatives these people contact seem to have ended up in heaven.  Never once does a medium say to the subject, "Um, bad news...  Great-Uncle George isn't in heaven.  He's sort of, um, unavailable at the moment, but did ask me if you'd mind sending down an air conditioner."

However, I'd like to look more closely at something I saw on another website, one critical of Goldman and his claims.  The post by the critic launched something of a comment-war between people who agreed with the skeptic, and those who thought Goldman's ideas were reasonable.  The most interesting comment, I think, was the following:

Why are you bashing Quantum Jumping?  Maybe he's wrong about how it works, but who cares, as long as it does work?  If it can make someone's life better, then there's nothing wrong with what he's doing.

It probably goes without saying that I disagree with this (but I'm going to say it, anyhow).  The main point is that Goldman's claim states that other selves in other universes actually, honestly, truly exist, and he is actually, honestly, truly going to put you into direct contact with them.  Despite the testimonials, there is no evidence that this claim has any merit whatsoever.  So if his technique is really a visualization or actualization method -- the same as many others available out there -- then he should market it as such, and drop all of the bullshit about quantum physics and alternate universes.  Of course, he won't do that; mentioning Hawking and Kaku and the rest gives him credibility, and (most importantly) it sells DVDs.
Now, if you buy it, and it improves your life, allows you to accomplish things you otherwise would not have been able to do, then I'm glad for you.  But the fact remains that what Goldman is saying is false.  And honestly, if you accomplished wonderful things using his program, I strongly suspect you would have been able to do them equally well without it.

What it boils down to is a point I've made more than once: telling the truth matters.  The world is what it is, and scientists and other skeptics are trying their best to elucidate how it works.  When a huckster like Goldman comes along, and tries to convince you otherwise -- and makes lots of money at your expense in the process -- it is simple dishonesty, and is no more to be respected than were the peddlers of miraculous tonics in the nineteenth century.  Like those tonics, Quantum Jumping is so much snake oil -- and as usual, caveat emptor.