The last voyage of the doomed

On May 19, 1845, two ships -- the HMS Erebus and the HMS Terror -- set sail from Greenhithe, Kent, England, bound for an exploration of the fabled Northwest Passage, the alleged shipping route that crossed from the Atlantic to the Pacific via the Arctic Ocean, saving a long and arduous voyage southwest and around Cape Horn (in South America) or worse still, southeast around the Cape of Good Hope (South Africa) and thence into the pirate-ridden, and at that time uncharted, waters of the Indian Ocean.

The ships carried a combined total of 134 men, including the 24 officers, under the leadership of Captain John Franklin.  They didn't enter the expedition blindly; they were hardly the first ships to undertake polar exploration, and they knew some of the hazards.  The ships had heavy iron cladding, steam engines both to provide drive when the wind died down and also to provide warmth for the crew, and three years' supply of food.  For the crew's entertainment, they had a library of over a thousand books, which was a good thing because one of the first things Franklin did was to ban swearing and drunkenness.

The problem, as you undoubtedly know, is that the Northwest Passage doesn't exist, at least in the sense of an ice-free route north of Canada.  There is water between Greenland and northern Alaska, but (at least back in the nineteenth century) it was never without a covering of ice, even in midsummer.  But the rumors of a Northwest Passage had grown so large in the imaginations of merchants looking for a cheaper route for transporting goods that finding (nonexistent) open water became a positive obsession.

So Franklin's team took off in May of 1845.  They made a brief stop in Stromness (in the Orkney Islands), then made a thirty-day voyage to reach the Whalefish Islands in Disko Bay, Greenland, where five of the sailors were discharged due to illness, reducing the officers and crew to 129.  In late June, 1845, the crew were instructed to write their last letters home, which many of them did, voicing hope for a successful conclusion to their expedition.

That was the last any of them were ever heard from.

Some time in the late summer of 1845, both ships became icebound off Beechey Island (in what is now the Canadian territory of Nunavut).  It rapidly became obvious that they would not be getting free before the end of the (sort of) warm season, so they prepared themselves to face the deep freeze of an Arctic winter.

It appears that three of the crew died that winter and were buried on Beechey Island, and that as soon as there was a break in the ice, the ships attempted to move forward again, only to be trapped a second time off King William Island.  Some of them were still alive in 1847 -- Captain Franklin is recorded as having died in June of that year -- and when it became obvious that 1848 was going to be no different, the hundred or so survivors, under the leadership of executive officer Francis Crozier and second-in-command James Fitzjames, set out over the ice on foot to try to reach safety.

Ten years later, a subsequent (and luckier) expedition investigating the Arctic found a piece of paper under a cairn on the coast of King William Island, that said the following:

and start on tomorrow, 26th, for Back's Fish River.

None of them made it.  Thirty or forty are thought to have reached the northern coast of mainland Canada, but all of them died there, still hundreds of miles from the nearest settlement.

The reason all of this grim stuff comes up is a fascinating paper in the journal Polar Record describing the discovery of the remains of one of the men from the doomed expedition, and the fact that it has been shown to be what's left of Warrant Officer John Gregory, engineer aboard the Erebus.

The DNA evidence from the corpse matched the DNA of one of John Gregory's direct descendants, Jonathan Gregory of Port Elizabeth, South Africa.  "Having John Gregory's remains being the first to be identified via genetic analysis is an incredible day for our family, as well as all those interested in the ill-fated Franklin expedition," said Gregory in a press release.  "The whole Gregory family is extremely grateful to the entire research team for their dedication and hard work, which is so critical in unlocking pieces of history that have been frozen in time for so long."

Dozens of other skeletal remains have been located, most of them from Erebus Bay, King William Island, but this is the first one to be conclusively identified.

Better still, facial reconstruction of Gregory's skull has given us an idea of what he looked like: 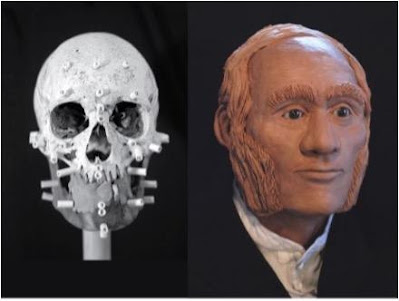 [Image courtesy of Diana Trepkov and the University of Waterloo]

I can't imagine what it must have been like for these 129 men to spend three years trapped in the ice.  At what point did they completely give up hope of being rescued?  That they retained at least some determination to survive is shown by Crozier and Fitzjames's last-ditch effort to reach safety.  But the whole story is as sad as it is inspiring.

And now, we have a face to put to one of the men on that last voyage of the doomed.  It's a haunting image, a relic of one of the most tragic attempts to explore the world.  I wonder what else we will learn from the remains that have been discovered -- and if, one by one, we will get to gaze into the faces of those men who died in the frozen wastelands of northern Canada over a century and a half ago.

****************************************
Ever get frustrated by scientists making statements like "It's not possible to emulate a human mind inside a computer" or "faster-than-light travel is fundamentally impossible" or "time travel into the past will never be achieved?"
Take a look at physicist Chiara Marletto's The Science of Can and Can't: A Physicist's Journey Through the Land of Counterfactuals.  In this ambitious, far-reaching new book, Marletto looks at the phrase "this isn't possible" as a challenge -- and perhaps, a way of opening up new realms of scientific endeavor.
Each chapter looks at a different open problem in physics, and considers what we currently know about it -- and, more importantly, what we don't know.  With each one, she looks into the future, speculating about how each might be resolved, and what those resolutions would imply for human knowledge.
It's a challenging, fascinating, often mind-boggling book, well worth a read for anyone interested in the edges of scientific knowledge.  Find out why eminent physicist Lee Smolin calls it "Hugely ambitious... essential reading for anyone concerned with the future of physics."
[Note: if you purchase this book using the image/link below, part of the proceeds goes to support Skeptophilia!]