In today's installment of "The Universe Is A Really Weird Place," we have: a piece of our own galaxy that we didn't even know existed until now.

It's called the "Cepheus Spur" after the constellation Cepheus, in which (from the Earth perspective) the structure seems to reside.  It's a spiral of stars lying above the galactic plane, and at the moment, astronomers don't know how it got there.   "Possibly these are oscillations of the galactic disk resulting from the convulsive evolution of the galaxy," said co-discoverer Michelangelo Pantaleoni González, of the Spanish Astrobiology Center.  "Perhaps they are the echoes of collisions with other galaxies billions of years ago, or maybe it’s something else."

The befuddlement of the experts is indicative that this structure has some seriously odd characteristics.  One of the strangest is that it seems to be mostly composed of type-OB blue supergiant stars, which are amongst the rarest star types known; from observations of the Milky Way, only one star in a million is a type-OB blue supergiant.

That's even taking into account the fact that the ones we know about are visible from a long way off.  They have masses between twenty and fifty times that of the Sun, and luminosities on the order of a hundred thousand times higher.  One familiar example is Rigel, in Orion, which is the brightest star in the constellation despite being 860 light years away. 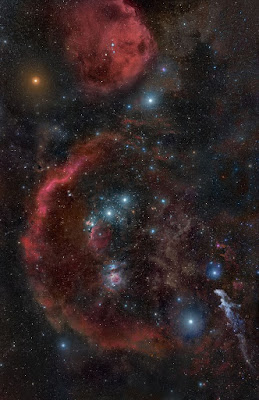 Their rarity isn't just because it's unusual to have such a huge clump of matter form; they're also exceedingly short-lived.  Because of their mass, they burn through their hydrogen fuel quickly, which makes them the hottest stars -- with surface temperatures of between 10,000 and 50,000 K (the Sun's surface is on the order of 5770 K).  It's estimated that a typical type-OB blue supergiant goes from formation to supernova in something between a few hundred thousand and thirty million years; again, by contrast, the Sun is estimated at 4.6 billion years in age, and is only about halfway through its life.

So to have a swirl of these rare and short-lived stars whirling above the plane of the galaxy is a significant puzzle.

"When we discovered the spur, there was no explosive revelation, but something inside me was transformed.  That’s what draws you in and gives meaning to so much effort," said Pantaleoni González.  "We were in front of [astrophysicist] Jesús [Apellániz]’s computer when he began to inspect this density of dots on the map. I ran to make a special diagram to see if it was consistent with the idea that there was a structure there, and it appeared."

The presence of these stars outside of the galactic plane has yet to be explained, and it's still unknown if the Cepheus Spur really is composed primarily of rare type-OB blue supergiants, or if we're overestimating their frequency because they're so luminous.  It could be that there are a lot of other, dimmer stars in the Spur that we're not seeing because of its distance (estimated at an average of 100,000 light years).  In any case, what seems certain is that this discovery will keep the astrophysicists working for a long while -- and illustrates that once again, the universe is full of surprises.

Which is one of the reasons that science is so endlessly fascinating.