Let me ask you a hypothetical question.

You're over on Twitter, and you post a link making a political claim of some sort.  Shortly thereafter, you get responses demonstrating that the claim your link made is completely false.  Would you...

I know this sounds like a setup, and it is, but seriously; why wouldn't everyone select answer #1?  As I discussed in a post just a few days ago, we all make mistakes, and we all hate the feeling of finding out we're in error.  So given that most animal species learn to avoid choices that lead to experiencing pain, why is the answer actually more commonly #3? 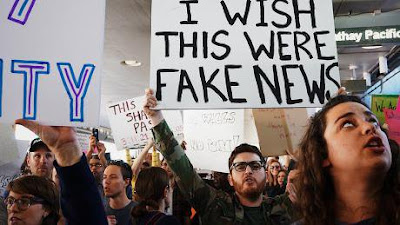 I'm not just making a wild claim up myself in order to have a topic to blog about.  The fact that most people increase their rate of promulgating disinformation after they've been caught at it is the subject of a paper that was presented last week at the CHI Conference on Human Factors in Computing Systems called, "Perverse Downstream Consequences of Debunking: Being Corrected by Another User for Posting False Political News Increases Subsequent Sharing of Low Quality, Partisan, and Toxic Content in a Twitter Field Experiment."  The title could pretty much function as the abstract; in an analysis of two thousand Twitter users who post political tweets, the researchers looked at likelihood of posting false information after having errors pointed out online, and found, amazingly enough, a positive correlation.

"We find causal evidence that being corrected decreases the quality, and increases the partisan slant and language toxicity, of the users’ subsequent retweets," the authors write.  "This suggests that being publicly corrected by another user shifts one's attention away from accuracy -- presenting an important challenge for social correction approaches."
"Challenge" isn't the right word; it's more like "tendency that's so frustrating it makes anyone sensible want to punch a wall."  The researchers, Mohsen Mosleh (of the University of Exeter) and Cameron Martel, Dean Eckles, and David Rand (of the Massachusetts Institute of Technology), have identified the twenty-first century iteration of the backfire effect -- a well-studied phenomenon showing that being proven wrong makes you double down on whatever your claim was.  But here, it apparently makes you not only double down on that claim, but on every other unfounded opinion you have.
In what universe does being proven wrong make you more confident?
I swear, sometimes I don't understand human psychology at all.  Yeah, I guess you could explain it by saying that someone who has a dearly-held belief questioned is more motivated in subsequent behavior by the insecurity they're experiencing than by any commitment to the truth, but it still makes no sense to me.  The times I've been caught out in an error, either here at Skeptophilia or elsewhere, were profoundly humbling and (on occasion) outright humiliating, and the result was (1) I apologized for my error, and (2) I was a hell of a lot more careful what I posted thereafter.
What I didn't do was to say "damn the torpedoes, full speed ahead."
This does pose a quandary.  Faced with a false claim on social media, do we contradict it?  I don't have the energy to go after every piece of fake news I see; I usually limit myself to posts that are explicitly racist, sexist, or homophobic, because I can't in good conscience let that kind of bullshit go unchallenged.  But what if the outcome is said racist, sexist, or homophobe being more likely to post such claims in the future?
Not exactly the result I'm looking for, right there.
So that's our discouraging piece of research for today.  I honestly don't know what to do about a tendency that is so fundamentally irrational.  Despite all of our science and technology, a lot of our behavior still seems to be caveman-level.  "Ogg say bad thing about me.  Me bash Ogg with big rock."