Combatting magical thinking can be an uphill battle, sometimes.

Even as a diehard skeptic, I get where it comes from.  It can sometimes be an amazingly short trip from "I wish the world worked this way" to believing the world does work that way.  Besides wishful thinking, superstitions can sometimes arise from correlation/causation errors; the classic example is going to watch your favorite sports team while wearing a particular shirt, and your team wins, so you decide the shirt's a lucky charm and proceed to wear it to subsequent games.

This reminds me of one of my college philosophy teachers, who recounted to us something that happened the previous evening.  There'd been a big thunderstorm, and the power went out, and his three-year-old daughter got scared and said, "Daddy, make the lights come back on!"

So he stood up and said, in a thunderous voice, "LET THERE BE... LIGHT."

And the power came back on.

His daughter really respected him after that.  But I bet she started getting suspicious the next time there was a power outage, and his magical ability suddenly didn't work so well any more.

Once a superstitious belief is in place, it can be remarkably hard to eradicate.  You'd think that, like my professor's daughter, once you had some experience disconfirming your belief, you'd go, "Oh, okay, I guess my lucky shirt doesn't work after all."  But we've got a number of things going against us.  Confirmation bias -- we tend to give more weight to evidence that supports what we already believed to be true.  The sunk-cost fallacy -- when we've already put a lot of energy and time into supporting a claim, we're very reluctant to admit we were wrong and it was all a waste.

Another, and weirder, reason superstitions can get cemented into place is the peculiar (but substantiated) nocebo effect.  As you might guess, the nocebo effect is kind of an anti-placebo effect; nocebo is Latin for "I will harm" (placebo means "I will please").  When somebody believes that some magical action will cause them injury, they can sometimes sustain real harm -- apparently the expectation of harm manifests as actual, measurable symptoms.  (This has sometimes been used to explain cases where "voodoo curses" have resulted in the targets becoming ill.)

The reason this comes up is because of two recent discoveries of artifacts for delivering curses in ancient Greece.  The ancient Greeks were a fascinating mix of science and superstition -- but, as I mentioned above, that seems to be part of the human condition.  When we think of them, it's usually either in the context of all the scientific inquiries and deep thought by people like Aristarchus, Pythagoras, Archimedes, and Aristotle, or because they had gods and sub-gods and sub-sub-gods in charge of damn near everything.

This latter tendency probably explains the 2,500 year old tablets that were recovered from a well in Athens, each one containing a detailed curse targeting a specific person.  The people who wrote each one didn't sign them; apparently, cursing someone and then signing it, "cordially yours, Kenokephalos" was considered a stupid move that was just asking for retribution.

The tablets, which were made of lead, were found by a team led by Jutta Stroszeck, director of the Kerameikos excavation on behalf of the German Archaeological Institute in Athens.  They were found in a well supplying a bath-house near the Dipylon -- the city gate near the classical Athenian Academy. 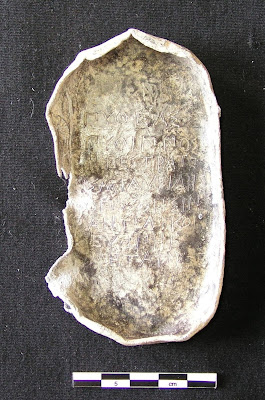 One of the curse tablets discovered by Stroszeck et al.

Apparently throwing the curses into the well started happening because the previous technique was to put them in the coffins of recently-deceased persons, with the intent that the dead guy's spirit would bring the curse-tablet down to the Underworld and say to Hades, "Hey, bro, get a load of this," and Hades would obligingly smite the recipient.  But around that time Athens tried to put the kibosh on people practicing the Black Arts, and made it illegal to put curses in coffins, so the would-be hexers started to throw them into wells instead.

You have to wonder if any ill effects their targets suffered upon drinking the well water came not from the curse, but from lead poisoning.

The second discovery, which was described in the journal Hesperia last week, is even more gruesome; the remains of a dead chicken that had been chopped up, its beak tied shut, then put in a clay vessel pierced with a nail.  It also contained a coin, presumably to pay whatever evil spirit found the cursed Chicken-o-Gram for carrying out the intent of the spell, which was probably to render the target unable to talk.  The paper describes a similar spell launched against one Libanos, a fourth-century C. E. Greek orator:

To his despair, Libanos had lost the ability to speak before an audience.  He could neither read nor write; he was plagued by severe headaches, bodily pain, and gout.  Libanos's condition improved upon the discovery and removal of a mutilated, dismembered chameleon, which had been hidden in his classroom -- a place where he spent much time.  The animal's head was bent between its hind legs, one of its front limbs cut off, and the other was stuffed into its mouth.

The weird mutilations and twisted pose had an obvious aim; to visit upon Libanos painful symptoms and an inability to speak.  What I suspect, though, is that the problems he had were purely natural in origin, and the discovery and removal of the curse acted as a placebo -- he thought, "Okay, now I should get better!", and did.

Why exactly the nocebo and placebo effects work isn't known; it may have to do with the production or inhibition (respectively) of stress hormones like cortisol and adrenaline, which are known to have long-term bad effects if levels stay high.  But honestly, that's just a guess.

Although I still think it's more likely than damage delivered directly by cursed chickens.

In any case, the discoveries are fascinating, and illustrate that the magical thinking we're still fighting today has a long genealogy.  Wouldn't it be nice if logical and science came as readily?

You have to wonder what the human race would have accomplished by now if we had an inborn tendency toward evidence-based thinking rather than believing in evil curses and wishing wells.