Is it just me, or has the Religious Right completely lost the plot?
And surprisingly, I am not referring to their continuing support of Donald "Two Corinthians" Trump.
To be fair, I've never been a fan of the Evangelicals.  I was in college during the height of the Jerry Falwell/Moral Majority years, when they seemed to follow the Puritan doctrine of disapproving of anyone, anywhere, having fun.  But back then, they had a sense of decorum.  I didn't agree with their beliefs, but at least they were consistent and articulate, and were able to sustain some glancing connection to reality.
Now?  To see how the Evangelicals have completely gone off the rails, look no further than Jim Bakker, who despite setbacks up to and including spending time in federal prison for fraud, is back to raking in the dough.  His program The Jim Bakker Show has millions of viewers, and while I'd like to think some of them watch it for the "what the fuck is this guy gonna say next?" factor, I'll bet it's a small minority.
(It bears mention that Jerry Falwell himself, shortly after he forced Bakker to hand over control of his church and shortly before Bakker went to prison, called him "The greatest scab on the face of Christianity in the entire two thousand years of our history."  That assessment doesn't seem to have cost Bakker anything in the way of viewership -- or monetary profits.)
This comes up because of a link sent to me by a friend and loyal reader of Skeptophilia, that appeared on the YouTube channel Telltale a couple of days ago.  And in it, Bakker is interviewing prominent Evangelical speaker Steve Quayle, and the topic is...
... zombies.
At first, generous soul that I am, I gave them the benefit of the doubt, and thought, "Oh, they're using the term metaphorically, for someone who is brainwashed or mindlessly acting under the influence of someone else."  Which would be ironic coming from them, but at least not batshit insane.
But no.  They're talking about literal zombies.  Like Dawn of the Dead. 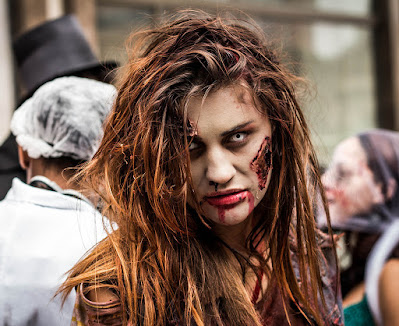 [Image licensed under the Creative Commons Gianluca Ramalho Misiti from São Paulo, Brazil, Zombie Walk 2012 - SP (8149613310), CC BY 2.0]
Bakker says to Quayle, "Zombies that are on the Earth are a disease like any other disease that affects people, and they become like zombies.  Is that right?"
And instead of saying what any normal person would say to a question like that, which is, "Time to lay off the controlled substances, bro," Quayle responds -- completely seriously -- in such a way as to make Bakker sound almost sane:

Forgive me, but that's only part of the story.  Zombies also have the evil spiritual entity known as demon possession, ok?  Because there is no rationale with a zombie...  The best way to explain zombie bloodlust is this: the appetite of demons expressed through humans.  It should be astonishing to people that the richest people in the world, not all of them but some of them, are into occult ceremonies where they have to drink, you know, blood that's extracted from a tortured child.  Now that's sick, but that's the appetite of demons expressed through humans ...  What I'm saying, Jim, is they can induce zombieism.  At least the appetite for human flesh.

Oh, and you'll never guess how Quayle and Bakker say the rich demon-people are turning their innocent victims into zombies.
Go ahead, guess.  You'll never get it.
They say that the contagion is being introduced into unsuspecting Americans via the nasal swabs they use to test for COVID-19.
I wish I was making this up, but listen to the clip I posted, which comes along with highly entertaining commentary from the guy who runs Telltale.  You will see that I am not exaggerating one iota.
Zombification from nasal swabs.  And yet another reason for the Religious Right not to trust the CDC and the medical establishment, and refuse vaccination.  Which makes it even more likely that the Evangelicals will contract COVID and get weeded out of the population by natural selection.
Speaking of irony.
If zombies aren't bad enough, another guest of Bakker's, one Tom Horn, says that we're going to be hit in ten years by the asteroid Apophis (we're not), that it's carrying an alien virus (it isn't), and that it's the "star Wormwood" mentioned in the Book of Revelation.
Oh, and he pronounces "contagion" as "cawn-tay-jee-on."  Which isn't relevant but is kind of hilarious.
What amazes me here is not that some wingnuts said something loony.  That, after all, is what wingnuts do.  What astonishes me is that the other three people sitting at the table with Bakker kept nodding and frowning, as if this was the most reasonable, rational philosophical discourse they'd ever heard, instead of doing what I'd have done, which is to burst into laughter, say, "You people are out of your ever-loving minds," and walk off the set.


But concerned head-nodding is, apparently, the reaction of the lion's share of Bakker's watchers, who not only now believe that we're at risk from demonic, blood-drinking, flesh-eating zombies and killer cawn-tay-jee-on-carrying asteroids, but have two more reasons to purchase his "Apocalypse Buckets" containing food to tide them over during the End Times (from which apparently he makes money hand over fist).
Anyhow, that's our dip in the deep end of the pool for the day.  I'd be discouraged to hear that Bakker has anyone who believes what he says; that he has millions of devoted viewers is kind of devastating.  It points up how far we have to go here in this country to counter the deeply-ingrained irrational, fearful, anti-science beliefs held by a significant number of people who live here -- and, unfortunately, who vote.
It also gives us further evidence that ignorance and fear combined with someone determined to profit off it is a very, very dangerous combination.
****************************************
Ever get frustrated by scientists making statements like "It's not possible to emulate a human mind inside a computer" or "faster-than-light travel is fundamentally impossible" or "time travel into the past will never be achieved?"
Take a look at physicist Chiara Marletto's The Science of Can and Can't: A Physicist's Journey Through the Land of Counterfactuals.  In this ambitious, far-reaching new book, Marletto looks at the phrase "this isn't possible" as a challenge -- and perhaps, a way of opening up new realms of scientific endeavor.
Each chapter looks at a different open problem in physics, and considers what we currently know about it -- and, more importantly, what we don't know.  With each one, she looks into the future, speculating about how each might be resolved, and what those resolutions would imply for human knowledge.
It's a challenging, fascinating, often mind-boggling book, well worth a read for anyone interested in the edges of scientific knowledge.  Find out why eminent physicist Lee Smolin calls it "Hugely ambitious... essential reading for anyone concerned with the future of physics."
[Note: if you purchase this book using the image/link below, part of the proceeds goes to support Skeptophilia!]