In Ursula LeGuin's amazing and disturbing novel The Lathe of Heaven, a very ordinary guy finds that he has a completely unordinary ability.

When he dreams, he wakes up and finds that whatever he dreamed has become reality.

George Orr, the protagonist, is terrified by this, as you might imagine.  It's not like he can control what he dreams; he isn't able to program himself to dream something pleasant in order to find he has it when he wakes.  No, it's more sinister than that.  Consider the bizarre, confusing, often frightening content of most of our dreams -- dreams that prompt you to say the next morning, "Where the hell did that come from?"

That is what makes up George's reality.

The worst part is that George is the only one who knows it's happening.  When his dream content alters reality, it alters everything -- including the memories -- of the people he knows.  When he wakes up and finds that the cityscape has changed and that some people he knew are gone, replaced with others he has never seen before, everyone else's memories changed as well.  George wakes to find he has a girlfriend, but she doesn't think it's sudden and weird; being George's girlfriend is what she remembers.

Only George sees that this is just the latest version of a constantly shifting reality.

So when he tries to explain to people what he can do, and (if possible) find a way to stop it, no one believes him.  No one... except a ruthless and ambitious psychiatrist who realizes that if he can figure out how to manipulate George's dreams, he can fashion a world to his own desires, using George as a tool to create the reality he wants.

LeGuin's terrifying vision of what happens when grasping amorality meets a naïve but useful skill is turning out not to be far from being realized.  George Orr's paranormal ability is the stuff of fiction, of course; but the capacity for influencing our dreams is not. 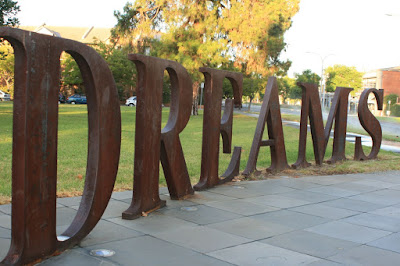 I found out yesterday from a friend and loyal reader of Skeptophilia that there is a cohort of powerful corporations who have teamed up to see if there's a way to insert advertising content into our dreams.  Xbox, Coors, Microsoft, and Burger King, among others, have been experimenting on volunteers to see if they can introduce targeted advertising while we're asleep, and (especially) while we're at the neurologically hyperactive REM (rapid eye movement) stage of sleep, in order to induce people to alter their behavior -- i.e., purchase the product in question -- once they wake up.  They've had some success; a test by Coors found that sixty percent of the volunteers were susceptible to having these kinds of product-based suggestions influence their dream content.

Forty sleep and dream researchers are now pushing back, and have drafted a document calling for regulation of what the corporate researchers are calling "dream incubation."  "It is easy to envision a world in which smart speakers—forty million Americans currently have them in their bedrooms—become instruments of passive, unconscious overnight advertising, with or without our permission," the authors state.

My fear is that the profit motive will outweigh any reluctance people might have toward having their dreams infiltrated by corporate content.  If cellular service providers were willing to give users a discount on their monthly fees, provided they agreed to allow themselves to be exposed to ads during the nighttime hours, how many people would say, "Sure, okay, go for it"?  I know for myself, I'm often willing to tolerate ads on games and video streaming services rather than paying extra to go ad-free.  I'd like to think that I'm able to tune out the ads sufficiently that they're not influencing my behavior, but what would happen if I'm exposed to them for all eight to ten hours that I'm sleeping every night?

Not all scientists are concerned about the technique's efficacy, however.  "Of course you can play ads to someone as they are sleeping, but as far as having much effect, there is little evidence," said Deirdre Barrett, a dream researcher at Harvard University.  "Dream incubation doesn’t seem very cost effective compared with traditional advertising campaigns."

Even if it doesn't have the manipulative capability the corporations are hoping, the idea still scares the hell out of me.  When every moment of our days and nights become just another opportunity for monetization, where will it all stop?   "I am not overly concerned, just as I am not concerned that people can be hypnotized against their will," said University of Montreal dream researcher Tore Nielsen.  "If it does indeed happen and no regulatory actions are taken to prevent it, then I think we will be well on our way to a Big Brother state … [and] whether or not our dreams can be modified would likely be the least of our worries."

Which is it exactly.  As I've pointed out before, my main concern is about the increasing control corporate interests have over everything.  And here in the United States, the problem is that the people who could potentially pass legislation to limit what the corporations can get away with are being funded largely by corporate donors, so they're not anxious to put the brakes on and see that flow of cash dry up suddenly.  It's a catch-22 that would require the government to police its own behavior for no other reason than simple morality and ethics.

And you can guess how successful that is likely to be.

I'm hoping that at least someone is listening, though.  I tend to agree with Nielsen; I don't think our dream content will be as easily manipulable, or as behavior-altering, as the corporations hope.  But what I'm more worried about is that once we refuse to delineate a hard line around our personal lives, and say to them, "Here, and no further," we've opened ourselves up to there being no part of our personal space that isn't considered a target for monetization.