Yesterday, we dealt with how freaking huge the universe is.  Today, we're going to look at something that, on its own scale, is also freaking huge.

Paleontologists working at a site in the Linxia Basin, in Gansu Province in northwestern China, found a skull and spine of what appears to be the largest land mammal that ever walked the Earth.  Called Paraceratherium, this thing was distantly related to modern rhinos, something that is apparent from the artist's reconstructions of what it may have looked like, except for being (1) hornless and (2) absolutely enormous, even by rhinocerosian standards.

Paraceratherium stood five meters tall at the shoulder.  That means if you took a typical twelve-foot extension ladder and propped it against one (Caution!  Do Not Try This At Home!), climbed to the top and reached as high as you could, you'd maybe be able to pat it on the back.  Its head was about seven meters off the ground, and it was on the order of eight meters long from nose to butt.

It's estimated to have weighed 24 tons, which for reference, is about as much as six full-grown African elephants. 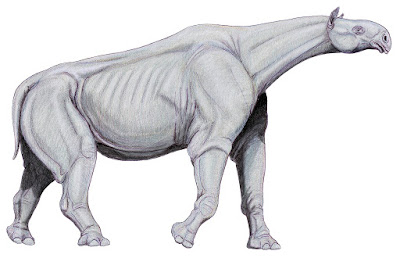 I don't know about you, but to me that is staggering.  Think of how much energy that thing used just to walk.  Think of the booming sounds it made when it set its feet down.  Think of how loud the vocalizations of that thing could have been.

Also, think about the piles of dung it must have left around.  "It's your turn to pooper-scoop the Paraceratherium" must have been a devastating thing to hear, back then.

Fortunately, there were no humans around to worry about such matters.  Paraceratherium lived during the Oligocene Epoch (between 34 and 25 million years ago), a time when a lot of groups of mammals got really large -- no one knows why, although there does seem to be a tendency for selection toward large body size when the climate is clement and there's plenty of food.  Also, this was the peak of recovery from the devastating Paleocene-Eocene Thermal Maximum, a climatic spike that had occurred about twenty million years earlier and which coincided with worldwide oceanic anoxia and widespread extinctions, so there was very high biodiversity, and probably equally high competition between species in similar niches.

In any case, that's the current holder of the "Largest Land Mammal Ever" award.  Given how stupendous they must have looked, it's sad they became extinct, although maybe it's just as well.  Imagine what it'd be like with these behemoths stomping around.  We have enough problems keeping deer out of our vegetable garden, I don't even want to think about how we'd keep out a Paraceratherium looking for a quick snack.