There are three reasons I don't tend to put much stock in conspiracy theories.

The first is that humans are seriously bad at keeping their mouths shut.  In fact, I wrote just a couple of months ago about a guy who developed a mathematical model that found the likelihood of a conspiracy staying secret varies inversely with the number of people who are involved in it.  So the idea of a grand global conspiracy that thousands of Illuminati operatives know about, but none of the rest of us do, is almost certainly nonsense.

The second is the more practical aspect.  A lot of conspiracies -- chemtrails, for example -- lack credence because what they're claiming is happening is next to impossible.  Okay, you could probably put some kind of nasty chemical in jet fuel so it gets spewed out in the exhaust contrail, but the fact remains that even so, it'd be an extremely stupid and inefficient way to poison people.  Likewise, the idea that the COVID-19 vaccine was being used as a delivery mechanism to inject people with 5G-capable microchips is indicative of the fact that whoever believes this understands neither microchips nor vaccines.

A third reason is specific to surveillance technology, which is a big part of a lot of alleged conspiracies.  Tracking even a fraction of the population of the world would generate so much data that it would be damn near impossible to analyze.  The idea that some evil agency is monitoring my every move, for example, is actually a little comical:

Evil conspirator #2:  Same as he was doing two hours ago.  He's eating potato chips and watching Doctor Who.

Evil conspirator #1:  The tracking device showed activity a few minutes ago, though.

Evil conspirator #2:  I think he got up to let his dog out.

So watching me 24/7 not only wouldn't generate anything sketchy, it would be the most boring and pointless job ever, sort of like monitoring Donald Trump to see how often he says something that's true.

But a recent development did raise my eyebrows.  A paper this week in Nature Communications describes a new invention -- a digital fiber that can store files and sense our physical activity and vital signs, and that's thin and flexible enough to be woven into cloth.

"Fibers still do what they've always done," said Yoel Fink of MIT, who was the senior author of the paper.  So my research has been to try to see if we can bring the world of devices and the world of function [together] to define a new path for fibers and align them with high-tech devices...  We think of the surface of our bodies as valued real estate, and we may be able to make better use of that real estate.  There's a lot of information that your body is communicating that we don't actually have the means to listen to or intercept.  That inaccessible data includes information about our health and physical activity.  To intercept that, sensing functions can be integrated into fabric." 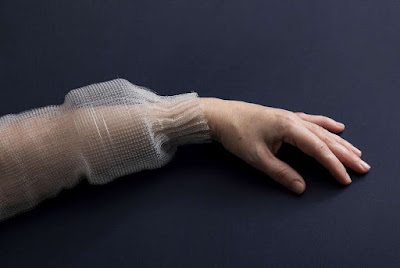 Okay, that got my attention, but maybe not for the reason you think.  I still don't believe that it is practical to monitor large numbers of people continuously, and most of the enormous quantity of data generated would be useless in any case.  What concerns me here is something more specific -- and that's the potential use of tech like this to monitor people and inform marketers, insurance companies, and so on of our health and physical activities, without our knowledge or permission.

It's already bad enough.  I'm perfectly aware that my phone is listening to me, but (like I said) since my life is kind of boring anyhow, it can listen to its little electronic heart's content.  I will say that I've been startled at times by this, though -- last year around Halloween my wife and I were in the car and were laughing about people dressing their dogs up in costume, and I suggested that we get a Star Wars AT-AT costume for our hound, Lena.  With her long legs, it would be just about perfect.

Then I got home, got on my computer, looked at Facebook, and the first thing I saw was an advertisement for -- I shit you not -- AT-AT costumes for dogs.

I know that my online activity is generating targeted ads for me all the time -- you wouldn't believe how many ads I see for running gear and writing software like Grammarly -- but the dog costume thing definitely gave me the sense of being watched by Big Brother.

So I don't see the evil global conspirators as being the potential problem, here; I'm more suspicious of the evil greedy capitalists.  If our activities are being watched via the clothes we wear, there'll be no way to hide anything from becoming an opportunity for targeted marketing, not to mention our health information no longer being private -- HIPAA be damned.

I guess the solution is to be naked all the time.  Where I live, that'd work in the summer, but being naked in the winter in upstate New York is just asking to freeze off body parts you may actually have a use for.  Plus, the neighbors might object.  In default of that, it seems to be only a matter of time that the intimate details of your life and activities might be monitored by your t-shirt.

With or without your permission.