The human drive to produce beauty is a curious thing, and one that science has thus far been unable to explain fully.  No less a luminary than Albert Einstein highlighted this when he said, "It would be possible to describe everything scientifically, but it would make no sense; it would be without meaning, as if you described a Beethoven symphony as a variation of wave pressure."

Many of us -- most of us, I suspect -- feel at least some need to create.  I'm defining this in its broadest sense; I mean not only the most obvious examples of art and music, but abstract beauty in writing, the graceful fluidity of truly gifted dancers and athletes, and the simple, everyday enjoyment of gardening, crocheting, macramé, and all of the other dozens of creative hobbies we engage in.

I'm no stranger to this drive myself.  My primary outlets are writing and music, but I'm also an amateur potter.  I came to art rather late in the game, which is odd because both of my parents were talented artists -- my mother was an oil painter and porcelain sculptor, while my father made jewelry and stained glass windows.  I showed no aptitude for art while growing up, but on a lark (and mainly because my wife was doing it and encouraged me to give it a try) took a class in making wheel-thrown pottery about ten years ago.  I got hooked, and stuck with it despite the fact that such skills do not come naturally to me.  By this point I can turn out some pieces that are pretty decent even to my hypercritical and rather unforgiving eye. 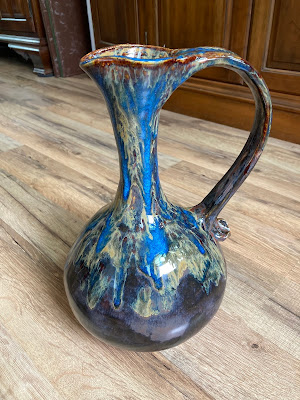 A stoneware bottle from my most recent firing
The open question is why so many of us feel a compulsion to do these sorts of things.  That they serve no practical purpose has become something of a running joke between my wife and I; "I'm heading out to the studio, because heaven knows we need more pottery" is a phrase one of us utters on nearly a daily basis.

The facile answer ("'cuz it's fun") doesn't really explain very much, and although it's tempting to ascribe an evolutionary/selective rationale -- that art and music and so on foster social cohesion, perhaps, giving the group stronger bonds and a better chance of surviving through enhanced cooperation -- explanations like those rest on some pretty tenuous grounds.  The truth is we don't know, but given the ubiquity of creative endeavors, it's certainly a powerful driver whatever its origins and purpose.

And it has quite a significant history in our species.  Two recent papers have looked at different aspects of truly ancient art, and found that (1) the impulse to create art goes back at least fifty thousand years, and (2) our ancestors were motivated enough to create it that they were willing to undergo considerable hardships to do so.

In the first, which appeared in Nature this week, a team of archaeologists working at a site called Einhornhöhle in northern Germany found a deer bone engraved with what appear to be symbolic carvings (i.e. not just knife marks left by butchering).  The bone has been dated at 51,000 years old -- at which point that region of Europe was populated by Neanderthals.

So wherever this artistic impulse comes from, we apparently share it with our cousins.

While there is substantial evidence for art and symbolic behaviour in early Homo sapiens across Africa and Eurasia, similar evidence connected to Neanderthals is sparse and often contested in scientific debates.  Each new discovery is thus crucial for our understanding of Neanderthals’ cognitive capacity.  Here we report on the discovery of an at least 51,000-year-old engraved giant deer phalanx found at the former cave entrance of Einhornhöhle, northern Germany.  The find comes from an apparent Middle Palaeolithic context that is linked to Neanderthals.  The engraved bone demonstrates that conceptual imagination, as a prerequisite to compose individual lines into a coherent design, was present in Neanderthals.  Therefore, Neanderthal’s awareness of symbolic meaning is very likely.  Our findings show that Neanderthals were capable of creating symbolic expressions before H. sapiens arrived in Central Europe.

In the second, which appeared last week in PLOS-ONE, a team of researchers led by archaeologist Iñaki Intxaurbe of the University of the Basque Country (Leioa, Spain) decided to see what technical hurdles our distant kin had to overcome in order to create cave art.  Working barefoot while carrying torches made of juniper branches or carved stone lamps filled with animal fat -- a decent guess for the kinds of artificial lighting they might have used -- Intxaurbe and his team found that producing paintings in deep caves (like the ones at Lascaux, France and Armintxe, Spain) took some serious planning.  Torches give good lighting, but burn out quickly (an average of 41 minutes) and produce a lot of smoke.  Lamps are relatively smokeless but produce much lower illumination.  And each site presented different challenges because of issues like dampness, temperature, and airflow.

So whatever significance these paintings had -- whether they were some kind of representative ritual magic, or whether (like many of us) they simply felt driven to create -- we might never know.  But what seems certain is that we are the inheritors of a very, very powerful drive, and one that goes back at least fifty millennia.

Think about that next time you get out the knitting needles, paintbrushes, or clay.