The idea that your personal fate and the course of global events are controlled by the apparent movement of the Sun and planets relative to bunches of stars that are at varying (but extreme) distances from the Earth, patterns which some highly nearsighted ancient Greeks thought looked vaguely like scorpions and rams and lions and weird mythical creatures like "sea-goats."

Like I said, all of that is old territory, here at Skeptophilia.  But yesterday, thanks to a loyal reader and frequent contributor, I found out something that I didn't know about astrology; lately, astrologers have been including the asteroids in their chart-drawing and fortune-telling.

Don't believe me?  Listen to this lady, Kim Falconer, who tells us that we should consider the asteroids in our astrological calculations -- but only use the ones we want.  There are too many asteroids, she said, to track them all; "Use the asteroids that have personal meaning to you."

As far as which ones to track, though -- this is where Falconer's recommendations get even funnier, because she says we should pay attention to the names of the asteroids.  Concerned about money?  Check out where the asteroids "Abundantia" and "Fortuna" are.  Would you like to find out what changes you can expect in your sex life?  Look for "Eros" and "Aphrodite."  And I'm thinking; where does she think these names came from?  All of them were named by earthly astronomers, more or less at random.  I mean, it's not like the names have anything to do with the actual objects.  For example, here's a photograph of Eros: 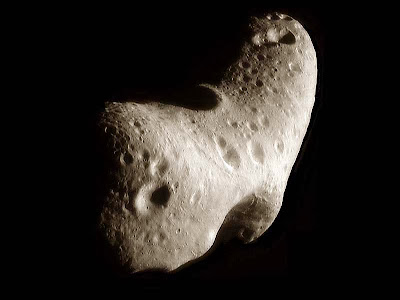 [Image is in the Public Domain courtesy of NASA]
Anything less sexy-looking is hard to imagine, especially given all of the craters and pits and warts on its surface.

But even so, the "choose the asteroids you like" thing more or less comprises drawing up the astrological chart you want and then acting as if what you got is some sort of profound and surprising revelation.  Because, after all, if there are over a million to choose from, there are bound to be some that have names and positions that are favorable to whatever direction you wish your life was taking.  It's a little like drawing up your Tarot card hand by going through the deck and pulling out the cards you like, and arranging them however you want, and claiming that's your reading and that it has deep implications for your future.

Anyhow, that's the latest from the world of horoscopes.  But I better wrap this up, because the asteroid Hygiea is currently crossing into the constellation Horologium the Clock, which probably means it's time for me to take a shower or something.
***************************************
Author Michael Pollan became famous for two books in the early 2000s, The Botany of Desire and The Omnivore's Dilemma, which looked at the complex relationships between humans and the various species that we have domesticated over the past few millennia.
More recently, Pollan has become interested in one particular facet of this relationship -- our use of psychotropic substances, most of which come from plants, to alter our moods and perceptions.  In How to Change Your Mind, he considered the promise of psychedelic drugs (such as ketamine and psilocybin) to treat medication-resistant depression; in this week's Skeptophilia book recommendation of the week, This is Your Mind on Plants, he looks at another aspect, which is our strange attitude toward three different plant-produced chemicals: opium, caffeine, and mescaline.
Pollan writes about the long history of our use of these three chemicals, the plants that produce them (poppies, tea and coffee, and the peyote cactus, respectively), and -- most interestingly -- the disparate attitudes of the law toward them.  Why, for example, is a brew containing caffeine available for sale with no restrictions, but a brew containing opium a federal crime?  (I know the physiological effects differ; but the answer is more complex than that, and has a fascinating and convoluted history.)
Pollan's lucid, engaging writing style places a lens on this long relationship, and considers not only its backstory but how our attitudes have little to do with the reality of what the use of the plants do.  It's another chapter in his ongoing study of our relationship to what we put in our bodies -- and how those things change how we think, act, and feel.
[Note:  if you purchase this book using the image/link below, part of the proceeds goes to support Skeptophilia!]