Being a linguistics nerd, I've often wondered why the phonemic repertoire differs between different languages.  Put more simply: why do languages all sound different?

I first ran into this -- although I had to have it pointed out to me -- with French and English.  I grew up in a bilingual family (my mom's first language was French), so while I'd heard, and to a lesser extent spoken, French during my entire childhood I'd never noticed that there were sounds in one language that didn't occur in the other.  When I took my first formal French class as a ninth-grader, the teacher told us that French has two sounds that don't occur in English at all -- the vowel sound in the pronoun tu (represented in the International Phonetic Alphabet as /y/) and the one in coeur (represented as /ø/).  Also, the English r-sound (/r/) and the French r-sound (/ʁ/) aren't the same -- the English one doesn't occur in French, and vice-versa. 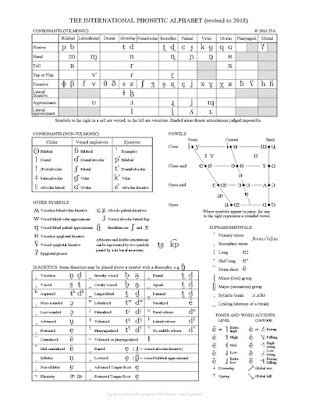 The International Phonetic Alphabet [image is in the Public Domain]

If you're curious, the largest phonemic inventory of any human language is Taa, one of the Khoisan family of languages, spoken mainly by people in western Botswana.  Taa has 107 different phonemes, including 43 different "click consonants."  If you want to hear the most famous example of a language with click consonants, check out this recording of the incomparable South African singer Miriam Makeba singing the Xhosa folk song "Qongqothwane:"

It's a mystery why different languages have such dramatically different sound systems, but at least a piece of it may have been cleared up by a paper in Science last week that was sent my way by my buddy Andrew Butters, writer and blogger over at the wonderful Potato Chip Math.  The contention -- which sounds silly until you see the evidence -- is that the commonness of the labiodental fricative sounds, /f/ and /v/, is due to an alteration in our bites that occurred when we switched to eating softer foods when agriculture became prominent.
I was a little dubious, but the authors make their case well.  Computer modeling of bite physiology and sound production shows that an overbite makes the /f/ and /v/ phonemes take 29% less effort than someone with an edge-to-edge bite exerts.  Most persuasively, they found that current languages spoken by hunter-gatherer societies have only one-quarter the incidence of labiodental fricatives as other languages do.
So apparently my overbite and fondness for mashed potatoes are why I like the f-word so much.  Who knew?  As I responded to Andrew, "Wow, this is pretty fucking fascinating."
Once a language develops a sound system, it's remarkably resistant to change, probably because one of the first pieces of language a baby learns is the phonetic repertoire, and after that it's pretty well locked in for life.  In her wonderful TED Talk, linguist Patricia Kuhl describes studying the phonetics of babbling.  When babies first start to vocalize at age about three months, they make sounds of just about every sort.  But between six and nine months, something fascinating happens -- they stop making sounds they're not hearing, and even though they're still not speaking actual words, the sound repertoire gradually becomes the one from the language they're exposed to.  One example is the English /l/ and /r/ phonemes, as compared to the Japanese liquid consonant [ɾ] (sometimes described as being halfway between an English /l/ and an English /r/).  Very young babies will vocalize all three sounds -- but by nine months, a baby hearing English will retain /l/ and /r/ and stop saying [ɾ], while a baby hearing Japanese does exactly the opposite.
If you've studied a second language that has a different phonemic set than your native language, you know that getting the sounds right is one of the hardest things to do well.  As a friend of mine put it, "My mouth just won't wrap itself around French sounds."  This is undoubtedly because we learn the phonetics of our native language so young -- and once that window has closed, adding to and rearranging our phonemic inventory becomes a real challenge.

So if you've ever wondered why your language has the sounds it does, here's at least a partial explanation.  I'll end with another video that is a must-watch, especially for Americans who are interested in regional accents.  I live in upstate New York but was raised in Louisiana and spent ten years living in Seattle, so I've thought of my own speech as relatively homogenized, but maybe I should listen to myself more carefully.