Of all the bizarre and fascinating discoveries physicists have made in the last century and a half, I think the one that twists my brain the most is the effect massive objects have on the space around them.

I use the "twists" metaphor deliberately, because the concept -- commonly called "warped space" -- is that anything with mass deforms the space it's in.  You've probably heard the two-dimensional analogy, to a bowling ball sitting on a trampoline and stretching the fabric downward.  If you then roll a marble across the trampoline, it will follow a deflected path.  Not because the bowling ball is mysteriously attracting the marble; the marble is merely following the contours of the space it's traveling through.

Increase the number of dimensions by one, and you've got a basic idea of what this feature of the universe is like.  We live in a three-dimensional space warped into a fourth dimension, and something passing near a massive object (as with the trampoline analogy, the more massive the object, the greater the effect) will follow a curved path.  Possibly, if the "attractor" is big enough, curved into a closed loop -- like the Moon does around the Earth, and the Earth does around the Sun.

Where it gets even weirder is that the degree of deflection of the moving object is dependent on how fast it's going.  Again, the marble provides a good analogy; a fast-moving marble will not alter its trajectory from a straight line very much, while a slow-moving one might actually fall into the "gravity well" of the bowling ball.  The same is true here in three-dimensional space.  This is why there's such a thing as "escape velocity;" the velocity of an object has to be great enough to escape the curvature of the gravity well it's sitting in, and that velocity gets larger as the "attractor" becomes more massive.

With a black hole, the escape velocity is greater than the speed of light.  Put a different way, space around a black hole has been warped so greatly that nothing is moving fast enough to avoid falling in.  Once you get close enough to a black hole to experience that degree of space-time curvature (a point called the "event horizon"), there is no power in the universe that can stop you from falling all the way in and meeting a grim fate called (I kid you not) "spaghettification."

Why this mind-warping topic comes up is because of a paper that appeared this week in Scientific Reports, describing research by Albert Sneppen, a student at the Niels Bohr Institute, looking at what would happen to light as it passed very near -- but not within -- the event horizon of a massive black hole.  Sneppen came up with a mathematical model showing that it creates an effect so bizarre and unmistakable that it is now being proposed as a way of detecting distant black holes.

Suppose between us and a distant galaxy is a large black hole.  The black hole (being black) is invisible; it can only be seen because of how it interacts with the matter and energy around it.  So the light from the galaxy has to pass near the black hole on its voyage to us.  The particles of light that stray too close follow the curvature of space right into the black hole, as you might expect.  The ones that get close, but not too close, are where things are interesting.

Recall that the Earth follows an elliptical path around the Sun because the Sun is warping space enough, and the Earth is moving slowly enough, that the Earth doesn't slingshot away from the Sun (fortunately for us) but remains "captured," following the shortest path through curvature of the space it's in.  So presumably there is a distance around a massive black hole that would have the same property vis-à-vis light; a distance where light speed is exactly right for it to follow the lines of the intensely curved space it's traveling through and describe a circular (or elliptical) path.

What this would do is create multiple images of the same galaxy, strung out in a line.

Check out the drawing by Sneppen's collaborator, Peter Laursen, showing the results of the effect: 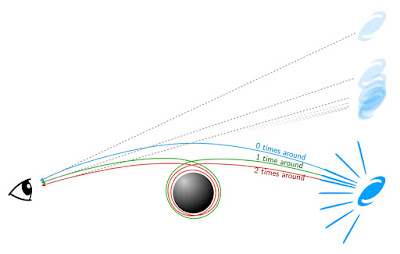 So there you have it; this morning's reason to feel very, very small.  I don't know about you, but I think the human species can use a little humility these days,  We need to be reminded periodically that we are tiny beings in an enormous universe, one that is so bizarre that it boggles the mind.  Although I have to say it's impressive that we tiny insignificant beings have begun to understand and explain this bizarreness.  As astronomer Carl Sagan put it, "We are a way for the universe to know itself."

**************************************
I've loved Neil de Grasse Tyson's brilliant podcast StarTalk for some time.  Tyson's ability to take complex and abstruse theories from astrophysics and make them accessible to the layperson is legendary, as is his animation and sense of humor.
If you've enjoyed it as well, this week's Skeptophilia book-of-the-week is a must-read.  In Cosmic Queries: StarTalk's Guide to Who We Are, How We Got Here, and Where We're Going, Tyson teams up with science writer James Trefil to consider some of the deepest questions there are -- how life on Earth originated, whether it's likely there's life on other planets, whether any life that's out there might be expected to be intelligent, and what the study of physics tells us about the nature of matter, time, and energy.
Just released three months ago, Cosmic Queries will give you the absolute cutting edge of science -- where the questions stand right now.  In a fast-moving scientific world, where books that are five years old are often out-of-date, this fascinating analysis will catch you up to where the scientists stand today, and give you a vision into where we might be headed.  If you're a science aficionado, you need to read this book.
[Note: if you purchase this book using the image/link below, part of the proceeds goes to support Skeptophilia!]