Lost in the shadows

Some historical discoveries are in that gray area between evocative and frustrating as hell.  The evocative part because it gives us a glimpse into a long-gone culture; frustrating because the great likelihood is we'll never know anything more about it.

It's why I will never get over the loss of the Great Library of Alexandria.  Destroyed piece by piece, starting with a strike against secular intellectuals by King Ptolemy VIII Physcon in 145 B.C.E. and an apparently accidental fire during Julius Caesar's attack on Egypt a hundred years later, the library lost most of its holdings -- and its reputation -- and was gone entirely by the end of the third century C.E.  At its height it had books from all over Europe, North Africa, the Middle East, and Asia, and almost certainly contained the complete catalogue of works by such luminaries as Aeschylus, Sophocles, Euripides, Theophrastus, and Aristotle -- the vast majority of which no longer exist.

It's as if we only knew about Shakespeare because of fragmentary copies of Cymbeline and Timon of Athens.  All his other works are gone, known only by title -- or perhaps completely unknown.  That's the situation we're in with most early authors.  The most painful part is that they're gone forever, irreclaimable, disappeared beyond rescue into the murky waters of our past.

That was the reaction I had to a discovery I found out about because a friend of mine sent me a link a couple of days ago, regarding an archaeological discovery in Finland.  Near the town of Järvensuo, northwest of Helsinki, a team of archaeologists from the University of Turku and University of Helsinki found a 4,400-year-old shaman's staff, the top of which was carved into the likeness of a snake.  It resembles depictions of ritual staffs in cave art from the area, so there isn't much doubt about what it is. 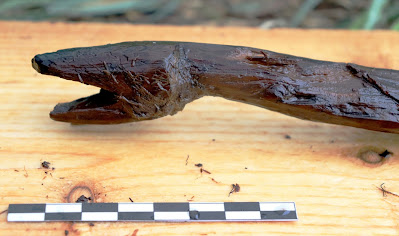 It's a pretty spectacular discovery.  "My colleague found it in one of our trenches last summer," said research team member Satu Koivisto.  "I thought she was joking, but when I saw the snake’s head it gave me the shivers."

The discovery brings up inevitable questions about how it was used, and what it tells us about religions and beliefs back then.  "There seems to be a certain connection between snakes and people," said team member Antti Lahelma.  "This brings to mind northern shamanism of the historical period, where snakes had a special role as spirit-helper animals of the shaman…  Even though the time gap is immense, the possibility of some kind of continuity is tantalizing: Do we have a Stone Age shaman's staff?"

Tantalizing indeed, in the full sense of the word.  Like the lost books of the Library of Alexandria, the knowledge, culture, and rituals of the people who used this staff are almost certainly gone forever.  While we can speculate, those speculations are unlikely to be complete (or even correct).  Imagine taking a random assortment of objects from our culture -- a pair of glasses, a stop sign, a computer mouse, a spoon, a garden rake -- and from those alone trying to figure out who we were, what we believed, what we did.

Note that I'm not diminishing the significance and interest of the find, which is pretty amazing.  It's just that it makes me even more cognizant of what we've lost.  It's inevitable, I know that -- nothing lasts forever, not artifacts, not knowledge, not culture.  It's just frustrating realizing how little we know, and worse still, how little we can know.

Maybe that's why I became a fiction author.  If you can't figure stuff out, make stuff up, that's my motto.  It doesn't replace what we've lost, but at least it provokes our imaginations to wonder what things were like back then, to ponder the lives of our distant ancestors, to picture what the world must have looked like to them.

It's better than nothing.  And until we create a time machine, I guess that'll have to be enough.