A writer friend and I have been in an interesting dialogue about the private (and public) side of writing.

The topic arose because she's just finished the first draft of a wonderful novel, a coming-of-age story about a girl making the transition between high school and college.  Knowing my friend as well as I do, it is easy to see that she shares some personality traits with her main character.  My friend worries that if people read her novel -- which I hope they will, some day -- readers will become convinced that the story is, at least on some level, autobiographical, and will judge her based on the actions of the character she created.

My reply was that there will be this label that says "Fiction" on the spine of the book, so anyone who doesn't notice that or doesn't know the definition of the word deserves everything they get.  But on a deeper level, her question is a profound one.  Because in some sense, all fiction writing is autobiographical -- or at the very least, deeply self-revealing.

I can say, without exception, that every protagonist I've ever written -- and more than one of the antagonists and minor characters -- is, in some way, me.  You can't write what you don't know, and that extends just as much to characters as it does to setting, time period, and plot.  None of them are intended to actually be me, of course; all of them have traits, quirks, and personal history that is different (for a lot of them, very different) from my own.  But in a real sense, if you want to find out who I am, read my fiction.  Then you'll know me.

This gives a serious spin to my friend's question, because to be read means to be seen, on a fundamental level.  Parts of you are exposed that you may have long kept hidden, and a discerning eye can often see more than you realize.  I've recounted here before how my long-time writing partner, the inimitable Cly Boehs, knew I was bisexual long before I told her.  Direct quote from her -- "You think I didn't know that?  Every story you've written has at least one scene with a sexy bare-chested man."
I was dumbstruck.  I honestly didn't think it was that obvious.  So much for hiding in the shadows. 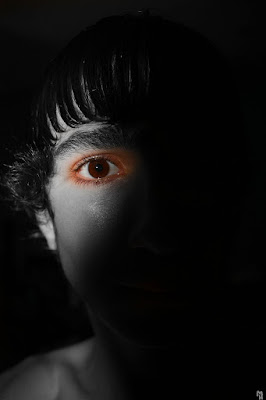 [Image licensed under the Creative Commons Marcus Quigmire from Florida, USA, Hiding in the darkness (3443966860), CC BY-SA 2.0]
It's a scary proposition, especially for someone who is as face-to-face shy as I am.  I've already closed my eyes and leapt off that high diving board, of course; my first book was published in 2015, and I've gone on to publish over a dozen more.  But truly, it still terrifies me in a lot of ways, and it's not just getting the inevitable "your writing sucks" reviews that all authors dread; part of it comes from the fact of exposing my soul in public.  There's something about having people read your work that's a little like walking out into the middle of the road, bare-ass naked.
And there's no doubt that it can backfire sometimes.  I still recall, with some pain, when I let a (former) friend read the first three chapters of a work-in-progress, and her critique began with a sneer: "This story is somewhere between a computer crash and a train wreck."  How that was supposed to be helpful, I don't know, and in fact with the perspective of time (this incident happened about twenty years ago) I now find myself wondering whether it was supposed to be helpful.  The critic in question was herself an off-again-on-again writer who had never completed a manuscript, and I suspect that the viciousness of the critique had at least something to do with envy.  At the time, however, her response so derailed my confidence that it was years before I actually picked up (and eventually completed) that novel.  (If you're curious, the novel is The Hand of the Hunter -- which is still one of my personal favorites of the stories I've written, and scheduled to be published early in 2022.)

So, in a way, all writing is personal, and all writers have a narcissistic streak.  We wouldn't write about something we didn't care about; our personalities shape our stories, and therefore our stories are reflections of who we are as people.  I pour my heart into what I write, and so, I believe, do most authors.  It is an act of bravery to put what we create out on public display, whether that display is on the level of sending it out to a few friends or publishing it for international purchase.  We are actually selling little portraits of our own spirits, and hoping and praying that the ones who look at them won't say, "Wow, what an ugly picture that is."