There's a claim out there that if a work of fiction doesn't grab the reader on the first page, it never will. The whole "slow burn" approach to writing, which was pretty much universal back in the nineteenth and early twentieth century, has been replaced by a necessity to hit the ground running.

My general attitude is that any time someone speaks in categoricals about writing, they're wrong. No, you don't have to only "write what you know." (Although if you're writing from the point-of-view of a character who belongs to a different demographic than you do, it's critical to have someone who is from that demographic read your story and tell you if you got it right.)  Yes, you can effectively write a modern novel that uses long, complex sentences.  No, you don't have to eliminate every single adverb, dialogue tag, semicolon, and use of the passive voice.

And no, it's not required to grab the readers by the shirt collar and scream into their faces by the end of the first page.

Be that as it may, I do appreciate a really snappy opening line.  It doesn't have to be action-oriented; not all books begin with car crashes, sword fights, and sex scenes.  Thinking about some of the best first lines I've read (I'll give a few examples of my favorites in a moment), I'm not entirely certain what it is that unites then, what distinguishes a first-class start from a more mundane one.  Something about unusual wording, a particularly piquant turn of phrase, a sentence that makes your ears perk up and leaves you saying, "wow, that wasn't what I expected, what on earth is going to happen next?"

As a brief aside, I think this is why I love Chris van Allsburg's The Mysteries of Harris Burdick.  In this one-of-a-kind book, van Allsburg gives an illustration and a single line from fourteen (imaginary) novels, which were left at a publisher's office by the enigmatic Harris Burdick.  Burdick never returned, leaving the editor with fourteen mysteries -- what were the stories that went along with the lines and the illustrations?  It's left for the reader to figure out what they might have been.  (One particularly memorable example; a drawing of a girl and a boy, done in van Allsburg's inimitably beautiful style, standing next to a lake.  The name of the story is "A Strange Day in July."  The line from the story: "He threw with all his might, but the third stone came skipping back.")  I don't overstate my case by saying that every writer should own this wonderful, mysterious, fascinating book. 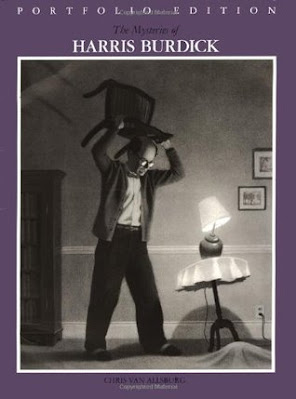 Anyway, I thought it might be fun to pick out some of my favorite opening lines.  These are ones that grabbed me instantly, the first time I opened the books, and stand out to me still as some of the catchiest beginnings ever.  I'll be interested to see if you agree, and if you have some of your favorites you'd like to add.

"There was a boy called Eustace Clarence Scrubb, and he almost deserved it." -- C. S. Lewis, The Voyage of the Dawn Treader

"Happy families are all alike; every unhappy family is unhappy in its own way." -- Leo Tolstoy, Anna Karenina
"The Morris dance is common to all inhabited worlds in the multiverse." -- Terry Pratchett, Reaper Man

"There were crimson roses on the bench; they looked like splashes of blood." -- Dorothy Sayers, Strong Poison
"I, Tiberius Claudius Drusus Nero Germanicus This-that-and-the-other (for I shall not trouble you yet with all my titles) who was once, and not so long ago either, known to my friends and relatives and associates as 'Claudius the Idiot,' or 'That Claudius,' or 'Claudius the Stammerer,' or 'Clau-Clau-Claudius' or at best as 'Poor Uncle Claudius,' am now about to write this strange history of my life; starting from my earliest childhood and continuing year by year until I reach the fateful point of change where, some eight years ago, at the age of fifty-one, I suddenly found myself caught in what I may call the 'golden predicament' from which I have never since become disentangled." -- Robert Graves, I, Claudius
"Well, I'm pretty much fucked." -- Andy Weir, The Martian
"Once upon a time, there was a woman who discovered she had turned into the wrong person." -- Anne Tyler, Back When We Were Grownups

"My lifelong involvement with Mrs. Dempster began at 5:58 o'clock p.m. on 27 December 1958, at which time I was ten years and seven months old." -- Robertson Davies, Fifth Business

"The world had teeth and it could bite you with them any time it wanted." -- Stephen King, The Girl Who Loved Tom Gordon

Just because I can, here are a few of my favorites from my own stories:

"Really, the whole thing started because of Marie-Solange Guidry's cheesecake." -- Periphery
"Claver Road doesn't end, it withers away." -- Descent into Ulthoa
"Darren Ault woke in pitch darkness, which was odd, because he was fairly certain he was dead." -- Lock & Key
"The woman sitting in the high-backed chair in Mr. Parsifal Snowe's office looked faded, like an item of clothing that was run through the washing machine a few too many times." -- The Dead Letter Office
"It had been a completely ordinary day for Duncan Kyle until the moment he fell through the floor of his living room at a little before two in the morning." -- Sephirot

I hope these would make you curious enough to continue reading!
An opening line isn't everything; there has to be a good story to follow.  And of course, plenty of awesome stories have unremarkable first lines.  But crafting a sizzling opening pitch is not a bad thing for a writer to aim for.  Knowing the way that brilliant first lines have stood out in my memory, some of them for many years, makes me all the more cognizant of how powerful a lure that can be to draw readers into the world of the story.
***************************************
Author Michael Pollan became famous for two books in the early 2000s, The Botany of Desire and The Omnivore's Dilemma, which looked at the complex relationships between humans and the various species that we have domesticated over the past few millennia.
More recently, Pollan has become interested in one particular facet of this relationship -- our use of psychotropic substances, most of which come from plants, to alter our moods and perceptions.  In How to Change Your Mind, he considered the promise of psychedelic drugs (such as ketamine and psilocybin) to treat medication-resistant depression; in this week's Skeptophilia book recommendation of the week, This is Your Mind on Plants, he looks at another aspect, which is our strange attitude toward three different plant-produced chemicals: opium, caffeine, and mescaline.
Pollan writes about the long history of our use of these three chemicals, the plants that produce them (poppies, tea and coffee, and the peyote cactus, respectively), and -- most interestingly -- the disparate attitudes of the law toward them.  Why, for example, is a brew containing caffeine available for sale with no restrictions, but a brew containing opium a federal crime?  (I know the physiological effects differ; but the answer is more complex than that, and has a fascinating and convoluted history.)
Pollan's lucid, engaging writing style places a lens on this long relationship, and considers not only its backstory but how our attitudes have little to do with the reality of what the use of the plants do.  It's another chapter in his ongoing study of our relationship to what we put in our bodies -- and how those things change how we think, act, and feel.
[Note:  if you purchase this book using the image/link below, part of the proceeds goes to support Skeptophilia!]