The attraction of the terrifying

The advent of the internet gave a whole new life to the phenomenon of urban legends.  When I was a kid (back in the good ol' Ancient Babylonian Times) those strange and often scary tales -- like the famous story of the choking Doberman -- were transmitted word-of-mouth and in-person, limiting the speed and scope of their spread.

Now that the world is connected electronically, these bizarre stories can spread like a wildfire.

This has given rise to "creepypasta" -- scary, allegedly true, first-person accounts that spread across the 'web.  (If you're curious, the name comes from "creepy" + "copypasta" -- the latter being a slang term for the practice of copying blocks of text between different social media platforms.)  Some have become pretty famous, and have inspired books and movies; in fact, I've riffed on two creepypasta in my novels, the legend of the Black-Eyed Children (in the Boundary Solution trilogy, beginning with Lines of Sight), and the terrifying tale of Slender Man (in Signal to Noise).

So obviously I have nothing against a good scary story, but a line is crossed when you add, "... and it really happened."  In fact, the topic comes up because of an interesting article by Tom Faber that appeared last week in Ars Technica looking at a specific subcategory of creepypasta -- stories that involve the supposedly supernatural (and terrifying) effects of certain video games.

Not being a gamer myself, I hadn't heard about most of these, but there's no doubt they're pretty scary.  Take, for example, the tale that grew around the Pokémon game "Lavender Town," which has an admittedly eerie soundtrack (you can hear a recording of it on the link provided).  Supposedly, the music contained "high-pitched sonic irregularities" that induced an altered mental state so severe that after playing the game, dozens of children in Japan committed suicide by climbing up on their roofs and throwing themselves off.

Needless to say -- or actually, evidently it does need to be said -- that never happened.  There is no evidence to be had online, from official documents, or in newspapers or television news that gives an iota of credence to it.  Even so, lots of people swear it's all real.  Sometimes these stories become oddly recursive; a game-inspired, supposedly true creepypasta called "Ben Drowned," about an evil spirit trapped in the game The Legend of Zelda: Majora's Mask, became so widespread that a new game -- The Haunted Cartridge -- was published based on it.

So a made-up scary story about a video game that people claimed was real inspired another video game.

Delving through these layers can be tricky sometimes, but what strikes me is how easily people accept that these tales are true.  For a lot of people -- and I reluctantly include myself in this category -- there's a part of us that wants that stuff to be real.  There's something oddly compelling about being frightened, even though if you think about it rationally (which I hope everyone does), there's really nothing at all attractive about a world where ghosts and monsters and zombies exist and video games can make a noise inducing you to kill yourself.

It's like the people, apparently numerous, who think that the H. P. Lovecraft Cthulhu Mythos is substantially true.  (I couldn't resist playing with that idea, too, giving rise to my short story "She Sells Seashells" -- which you can read for free at the link -- and I encourage you to do so, because all modesty aside, it's cool and creepy.)  But the question remains about why would you want Cthulhu et al. to exist.  Those mofos are terrifying.  Even the people who worship the Elder Gods in Lovecraft's stories always seem to end up getting eaten or dismembered or converted into Eldritch Slime, so there appears to be no feature of these beings that has any positive aspects for humanity.  Okay, I live in a pretty placid part of the world, where I frequently wish something would happen to liven things up, but even I don't want Nyarlathotep and Tsathoggua and Yog-Sothoth and the rest of the crew to show up in my back yard.

Despite all this, I still feel the attraction, and I'm at a loss to explain why.  I remember watching scary television and movies as a kid, and not just being entertained but on some level wishing it was real, even though I was well aware of how much more terrifying it would be if it were.  One example that stands out in my memory is the episode of Lost in Space called "Ghost in Space," wherein an invisible creature has arisen from a bog, and Dr. Smith becomes convinced he can communicate with it via Ouija Board.  Okay, watching it now, the whole thing is abjectly ridiculous (although I am still impressed with how they made the footprints of the creature appear in the sand without anything visible there to make them).  But other than being scared, I remember my main reaction was that I would love for something like that to be real.  Because of that, it's still one of the episodes I remember the most fondly, despite how generally incoherent the story is. 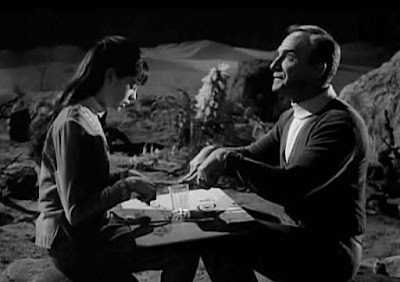 So (speaking of incoherent), I'm not even entirely certain what point I'm trying to make, here, other than (1) life would be a lot simpler if people would stop making shit up and claiming it's true, and (2) even people who are diehard skeptics can sometimes have a wide irrational streak.  It's fascinating how attracted we are to things that when you consider them, would be absolutely horrible if they're real.
Yet as the poster in Fox Mulder's office said, "I Want to Believe."
Anyhow, I should wind this up.  Not, of course, because there's anything interesting that I need to deal with.  When the most engaging thing in your immediate vicinity is watching the cows in the field across the road, it's perhaps not surprising that I sometimes feel like a good haunting or invasion by aliens would break up the monotony.
***************************************
Author Michael Pollan became famous for two books in the early 2000s, The Botany of Desire and The Omnivore's Dilemma, which looked at the complex relationships between humans and the various species that we have domesticated over the past few millennia.
More recently, Pollan has become interested in one particular facet of this relationship -- our use of psychotropic substances, most of which come from plants, to alter our moods and perceptions.  In How to Change Your Mind, he considered the promise of psychedelic drugs (such as ketamine and psilocybin) to treat medication-resistant depression; in this week's Skeptophilia book recommendation of the week, This is Your Mind on Plants, he looks at another aspect, which is our strange attitude toward three different plant-produced chemicals: opium, caffeine, and mescaline.
Pollan writes about the long history of our use of these three chemicals, the plants that produce them (poppies, tea and coffee, and the peyote cactus, respectively), and -- most interestingly -- the disparate attitudes of the law toward them.  Why, for example, is a brew containing caffeine available for sale with no restrictions, but a brew containing opium a federal crime?  (I know the physiological effects differ; but the answer is more complex than that, and has a fascinating and convoluted history.)
Pollan's lucid, engaging writing style places a lens on this long relationship, and considers not only its backstory but how our attitudes have little to do with the reality of what the use of the plants do.  It's another chapter in his ongoing study of our relationship to what we put in our bodies -- and how those things change how we think, act, and feel.
[Note:  if you purchase this book using the image/link below, part of the proceeds goes to support Skeptophilia!]