The cost of personal courage

I have been following, from some distance, the hue-and-cry over Simone Biles's removing herself from competition on the U.S. Olympic gymnastics team.  Biles was completely up-front about why.  "You have to be there 100%," she told reporters.  "If not, you get hurt.  Today has been really stressful.  I was shaking.  I couldn't nap.  I have never felt like this going into a competition, and I tried to go out and have fun.  But once I came out, I was like, 'No.  My mental is not there.'  It's been a long year, and I think we are too stressed out.  We should be out here having fun.  Sometimes that's not the case."

Well, immediately the pundits started weighing in.  Charlie Kirk called her a "selfish sociopath" and bemoaned the fact that "we are raising a generation of weak people like Simone Biles."  Clay Travis suggested she be removed from future competition because she couldn't be relied on.  Piers Morgan was perhaps the worst -- not surprising given his ugly commentary in the past.  "Are 'mental health issues' now the go-to excuse for any poor performance in elite sport?  What a joke...  Sorry Simone Biles, but there's nothing heroic or brave about quitting because you're not having 'fun' – you let down your team-mates, your fans and your country."

And so on.  The criticism came fast and furious.  There were voices who spoke up in support of her decision, but it seemed to me the nastiness was a lot louder. 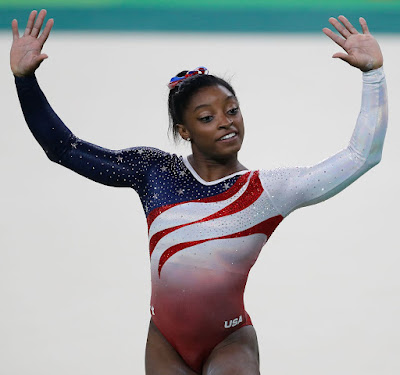 Or maybe I'm just sensitive.  Other writers have spoken with more authority about the rigors of Olympic training and gymnastics in particular, not only the physical aspects but the mental, topics which I am unqualified to discuss.  But whatever the context, there is one thing I'm dead certain about.

If someone says they're struggling mentally and/or emotionally, you fucking well believe them.

I have fought mental illness all my life.  I've been open about this here before; I have come to realize it is no more shameful than any other chronic condition.  I do know, however, first-hand how debilitating anxiety can be.  I've also suffered from moderate-to-severe depression, fortunately now ameliorated by medications and a family who is understanding and supportive.  So at present, I'm doing okay.

But it hasn't always been that way.  For much of my life, I was in a situation where "suck it up and deal" and "be tough, be a man" and "you should be thankful for what you have" were the consistent messages.  Therapy was for the weak; psychiatric care (and meds) were for people who were crazy.  There's nothing wrong with you, I was told.  You just spend too much time feeling sorry for yourself and worrying about things you can't control.

The result?  Twice I was suicidal, once at age seventeen and once at age twenty, to the point that I had a plan and a method and was ready to go for it.  That I didn't -- fortunately -- is really only due to one thing; I was scared.  I spent a good bit of my first marriage haunted by suicidal ideation, and there the only thing that kept me alive was my commitment to my students, and later, to my children.

That a bunch of self-appointed arbiters of proper behavior have told this remarkable young woman "No, I don't care how you feel or what you're going through, get back in there and keep performing for us" is somewhere beyond reprehensible.  I don't even have a word strong enough for it.  If you haven't experienced the hell of anxiety, panic attacks, and depression, you have zero right to criticize someone else, especially when she's doing what people in a bad mental space should be doing -- advocating for herself, setting her limits, and admitting when she can't manage to do something.

I wish I had known how to do that when I was twenty-four (Simone Biles's age).  But I was still a good fifteen years from understanding the mental illness I have and seeking out help -- and unashamedly establishing my own personal boundaries.

So to all the critics out there who think they know what Simone Biles should do better than she does -- shut the fuck up.  I presume you wouldn't go up to a person with a serious physical illness and have the temerity to tell them what they can and can't do, and to pass judgment on them if they don't meet your standards.  This is no different.  We have a mental health crisis in this country; skyrocketing incidence of diagnosed mental illnesses and uncounted numbers who go undiagnosed and unaided, and a health care system that is unable (or unwilling) to address these problems effectively.  What Simone Biles did was an act of bravery, and she deserves unequivocal support for it.  The cost of personal courage shouldn't be nasty invective from a bunch of self-appointed authorities who have never set foot on the road she has walked.

And those who can't understand that should at least have the good grace to keep their damn opinions to themselves.

**************************************
One of the characteristics which is -- as far as we know -- unique to the human species is invention.
Given a problem, we will invent a tool to solve it.  We're not just tool users; lots of animal species, from crows to monkeys, do that.  We're tool innovators.  Not that all of these tools have been unequivocal successes -- the internal combustion engine comes to mind -- but our capacity for invention is still astonishing.
In The Alchemy of Us: How Humans and Matter Transformed One Another, author Ainissa Ramirez takes eight human inventions (clocks, steel rails, copper telegraph wires, photographic film, carbon filaments for light bulbs, hard disks, scientific labware, and silicon chips) and looks not only at how they were invented, but how those inventions changed the world.  (To take one example -- consider how clocks and artificial light changed our sleep and work schedules.)
Ramirez's book is a fascinating lens into how our capacity for innovation has reflected back and altered us in fundamental ways.  We are born inventors, and that ability has changed the world -- and, in the end, changed ourselves along with it.
[Note: if you purchase this book using the image/link below, part of the proceeds goes to support Skeptophilia!]