The odds of creation

In today's contribution from the Department of Specious Statistics, the owner of a biblical timeline business and self-proclaimed mathematician has stated that she has calculated the likelihood of the biblical creation story being wrong as "less than 1 in 479 million."
Margaret Hunter, who owns Bible Charts and Timelines of Duck, West Virginia, stated in an interview, "I realized the twelve items listed in the Genesis creation account are confirmed by scientists today as being in the correct order, starting with light being separated from darkness, plants coming before animals and ending with man.  Think of the problem like this.  Take a deck of cards.  Keep just one suit—let’s say hearts.  Toss out the ace.  Hand the remaining twelve cards to a one year old child.  Ask him/her to hand you the cards one at a time.  In order.  What are the chances said toddler will start with the two and give them all to you in order right up to the king?"

Not very high, Hunter correctly states.  "Being a mathematician, I like thinking about things like this," she says.  "Moses had less than one chance in 479 million of just correctly guessing [the sequence of the creation account].  To me, the simplest explanation is Moses got it straight from the Creator."

Righty-o.  This just brings up a few questions in my mind, to wit:
I have to give her one thing; she got the odds of toddler-mediated correct card-ordering right.  For any twelve different objects, the number of possible combinations is 12!  (For non-mathematicians, this isn't just me saying the previous sentence excitedly.  12!, read as "twelve factorial," is 12*11*10*9*8*7*6*5*4*3*2*1, or 479,001,600.)
However, the major problem with this is that we can all take a look at the events in the biblical creation story, and see immediately that Moses didn't get them right.  Here, according to the site Christian Answers, is the order of creation:
One immediate problem I see is that there was day and night three days before the Sun was created, which seems problematic to me, as the following photograph illustrates: 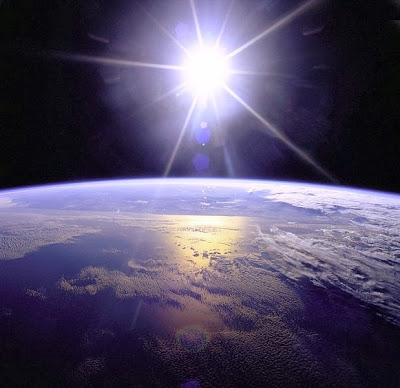 [Image is in the Public Domain courtesy of NASA/JPL]
But of course, the problems don't end there.  Birds before the rest of "land animals?"  Plants before the Sun and Moon?  The plants are actually the ones on the list that are the most wildly out of order -- seed-bearing plants didn't evolve until the late Devonian, a long time after "water creatures" (the Devonian is sometimes called "the Age of Fish," after all), and an even longer time (about 4.5 billion years, to be precise) after the formation of the Sun.  Humans do come in the correct place, right there at the end, but the rest of it seems like kind of a hash.

So even if we use Hunter's mathematics, we run up against the unfortunate snag that if putting the twelve events of creation in the right order has a 1 in 479,001,600 likelihood of happening by chance, then the likelihood of putting them in the wrong order by chance is 479,001,599 in 479,001,600.  Which is what happened.  Leading us to the inevitable conclusion, so well supported by the available hard evidence, that Moses was just making shit up.

You know, I really wish you creationists would stop even pretending that this nonsense is scientific.  Just stick with your "the Bible says it, I believe it, and that settles it" approach, because every time you dabble your toes in the Great Ocean of Science, you end up getting knocked over by a wave and eating a mouthful of sand.  And it's becoming kind of embarrassing to watch, frankly.  Thank you.
**************************************
One of the characteristics which is -- as far as we know -- unique to the human species is invention.
Given a problem, we will invent a tool to solve it.  We're not just tool users; lots of animal species, from crows to monkeys, do that.  We're tool innovators.  Not that all of these tools have been unequivocal successes -- the internal combustion engine comes to mind -- but our capacity for invention is still astonishing.
In The Alchemy of Us: How Humans and Matter Transformed One Another, author Ainissa Ramirez takes eight human inventions (clocks, steel rails, copper telegraph wires, photographic film, carbon filaments for light bulbs, hard disks, scientific labware, and silicon chips) and looks not only at how they were invented, but how those inventions changed the world.  (To take one example -- consider how clocks and artificial light changed our sleep and work schedules.)
Ramirez's book is a fascinating lens into how our capacity for innovation has reflected back and altered us in fundamental ways.  We are born inventors, and that ability has changed the world -- and, in the end, changed ourselves along with it.
[Note: if you purchase this book using the image/link below, part of the proceeds goes to support Skeptophilia!]