Today I dodged a battle on social media, and I honestly don't know if it makes me a coward or just someone who tries to be prudent about which battles are even winnable.

The person in question, an acquaintance I only know through a mutual friend but who connected to me a couple of years ago for reasons unknown, has thrown out some questionable stuff before, but nothing as bad as this.  "There aren't many genders," she posted.  "There are TWO genders and many mental disorders."

After I stopped seeing red enough that I could tell what was on my computer screen, I pondered a variety of responses I could have made.  Among the top contenders:

Then I calmed down a little more, and considered other, potentially less obnoxious responses:

But finally I said nothing, and unfriended her.

I know it's the duty of every responsible person to confront racism, homophobia, bigotry, narrow-mindedness, and general idiocy.  Not doing so, leaving this kind of thing unchallenged, gives it tacit permission to continue.  I never would have let something like this go in my classroom; the few times I ever got really, truly angry at students during my 32 year career were over issues like this.

But lord have mercy, I am tired.  I'm tired of seeing this kind of bullshit trumpeted as if it was a proclamation of an eternal truth.  I'm tired of trying to convince the anti-vaxxers and climate change deniers, the nitwits who claim the election was stolen and that Trump is the Second Coming of Jesus, the people who believe that the January 6 insurrectionists were Antifa and liberals in disguise.

Plus, there's the question of what good it would have done if I had confronted her on her nasty, sneering post.  She barely knows me; I think we've maybe talked in person once.  Since then I've had zero interactions with her, online or anywhere else.  Why would she listen to me?  More likely she'd write me off as another godless liberal, getting all bent out of shape because she dropped a Truth Bomb on me.  What is the chance that anything I could have said, polite or rude, would have changed her attitude one iota? 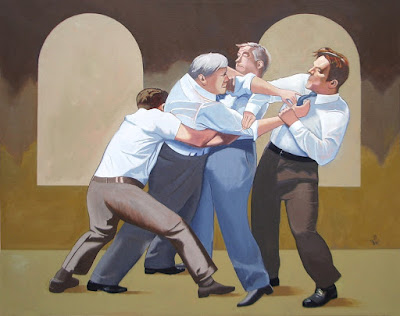 [Image licensed under the Creative Commons Blaine A. White, The Argument 01, CC BY-SA 4.0]

Still, I can't help but feel that I took the coward's way out.  If I'm not going to challenge stupidity and bigotry, it kind of gives lie to the entire raison d'être of this blog I've written so diligently on for the last ten years.  Every time we let someone like her get away with something like this unchallenged, it does double damage -- it further convinces any LGBTQ people who read it that they don't have (or aren't deserving of) unequivocal support, and it gives any other bigots in the studio audience free license to perpetuate their own hateful views.

So I dodged my responsibility, and I'm still feeling a little sick about it.  I'm not going to go back and re-friend her just to have an opportunity to say, "Oh, and about that post...!", and I guess there's an outside (probably minuscule) chance that when she sees she's lost friends over it, she might reconsider.

But I still think I made the wrong decision.

Right now, I'm taking a deep breath and recommitting myself to fight like hell against this sort of thing.  I can't let bigotry slide, excuse it by saying "it's just their religion/politics/age," give it a pass because I'm afraid of what they might say in response or who else I might piss off.  Okay, I'm tired, but it's still a battle worth fighting -- and one that can be won, but only if we refuse to accept prejudice and hatred every damn time we see it.

Once more unto the breach, dear friends, once more;
Or close the wall up with our English dead.
In peace there's nothing so becomes a man
As modest stillness and humility:
But when the blast of war blows in our ears,
Then imitate the action of the tiger;
Stiffen the sinews, summon up the blood,
Disguise fair nature with hard-favour'd rage;
Then lend the eye a terrible aspect;
Let pry through the portage of the head
Like the brass cannon; let the brow o'erwhelm it
As fearfully as doth a galled rock
O'erhang and jutty his confounded base,
Swill'd with the wild and wasteful ocean.